Typewriter / Typeface: The Legacy of the Writing Machine in Type Design

Typewriter typeface: once referred to the typeface used for writing in a personal printing machine || Currently used to define the appear­ance of faces that remind us of those that were used in typewriters.

Type bars, golf ball, and daisy wheel for Olivetti typewriters. These were the three mechanisms used for printing type in typewriters. Photos by María Ramos (bars and wheel) and Olivetti (ball).

We all know what “typewriter” and “typeface” mean as separate concepts, so there’s no need to define them. However, there may be some confusion about the use of these two terms together. Nowadays, we often see the word “typewriter” used as a qualifier for certain typefaces. Can typewriter be considered a style? If so, what features define a typewriter typeface? To answer these questions, we need to consider two perspectives: the term’s historical origin and its current usage.

In the course of the history of typewriters — roughly 100 years — the typefaces designed for the machine grew in number and evolved in shape. The shiftless alphabet used in the first commercially manufactured typewriter was soon replaced by a slab-serif design, which would become the unofficial standard among manufacturers in the first half of the 20th century. Most companies had their own Pica typeface, a monospaced font that fit ten characters to the inch. The design of the characters and the printing differences among models were used back then for typewriting identification. This type style quickly spread, but it was not the only option available. Sans serif, script, and italic fonts were also included in early typewriter-font catalogs. There were typefaces created for particular purposes, such as protective writing that perforated paper instead of inking it. The shiftless alphabets were mainly used for advertising, telegrams, and financial work; and the italic and script faces were intended for informal documents like personal correspondence. 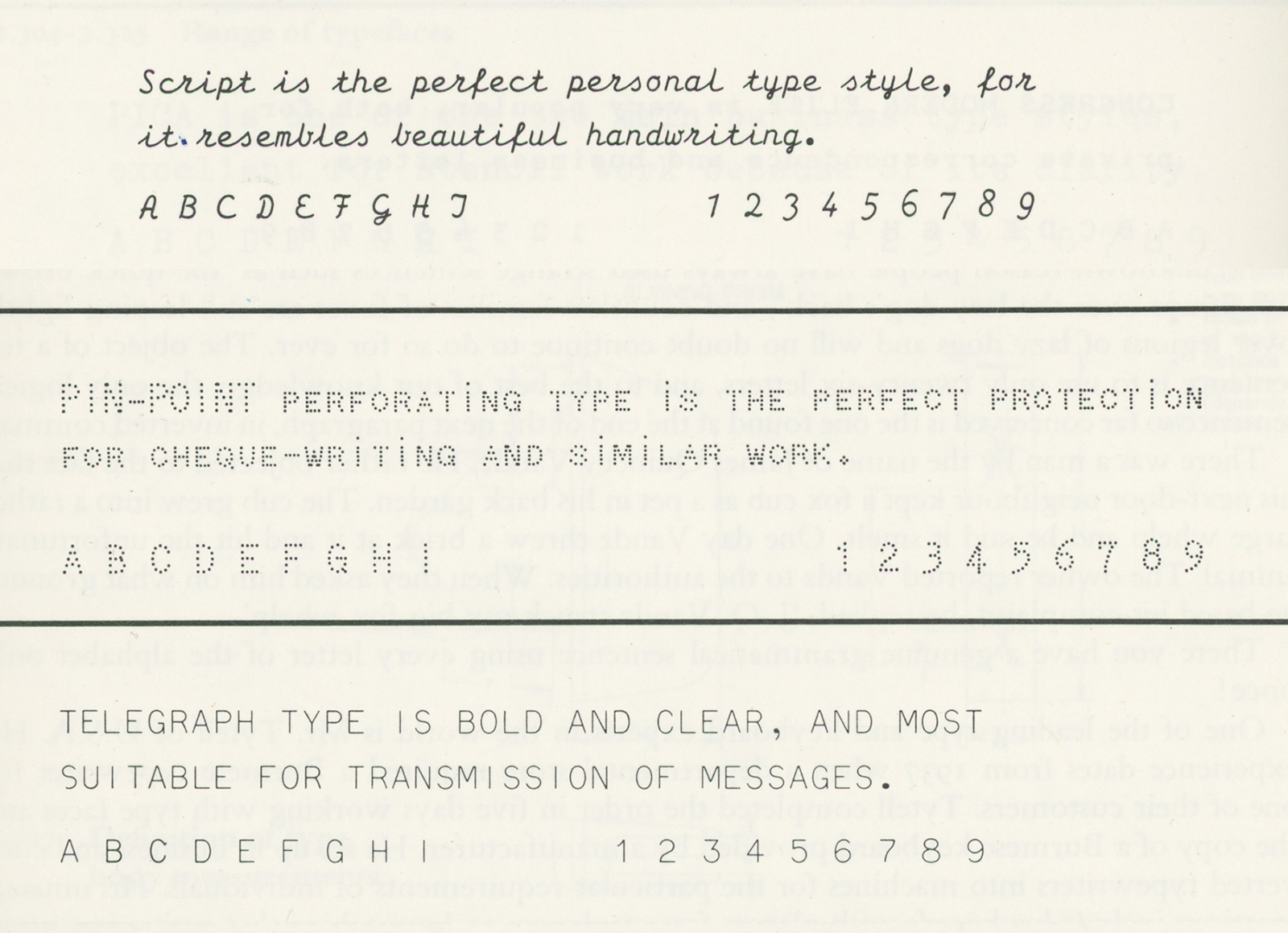 Monospaced typefaces were born from the limitations of mechanical typewriters. When the typist pressed a key, the carriage moved the paper the same distance each time, so it was easier to return to a previous printing point to make corrections and do tabulation work. The terms “typewriter” and “monospace” have a common genesis but are not interchangeable. We can find typefaces created for the machine with different character widths, and some monospaced typefaces designed today have no aesthetic or historical link to typewriters. 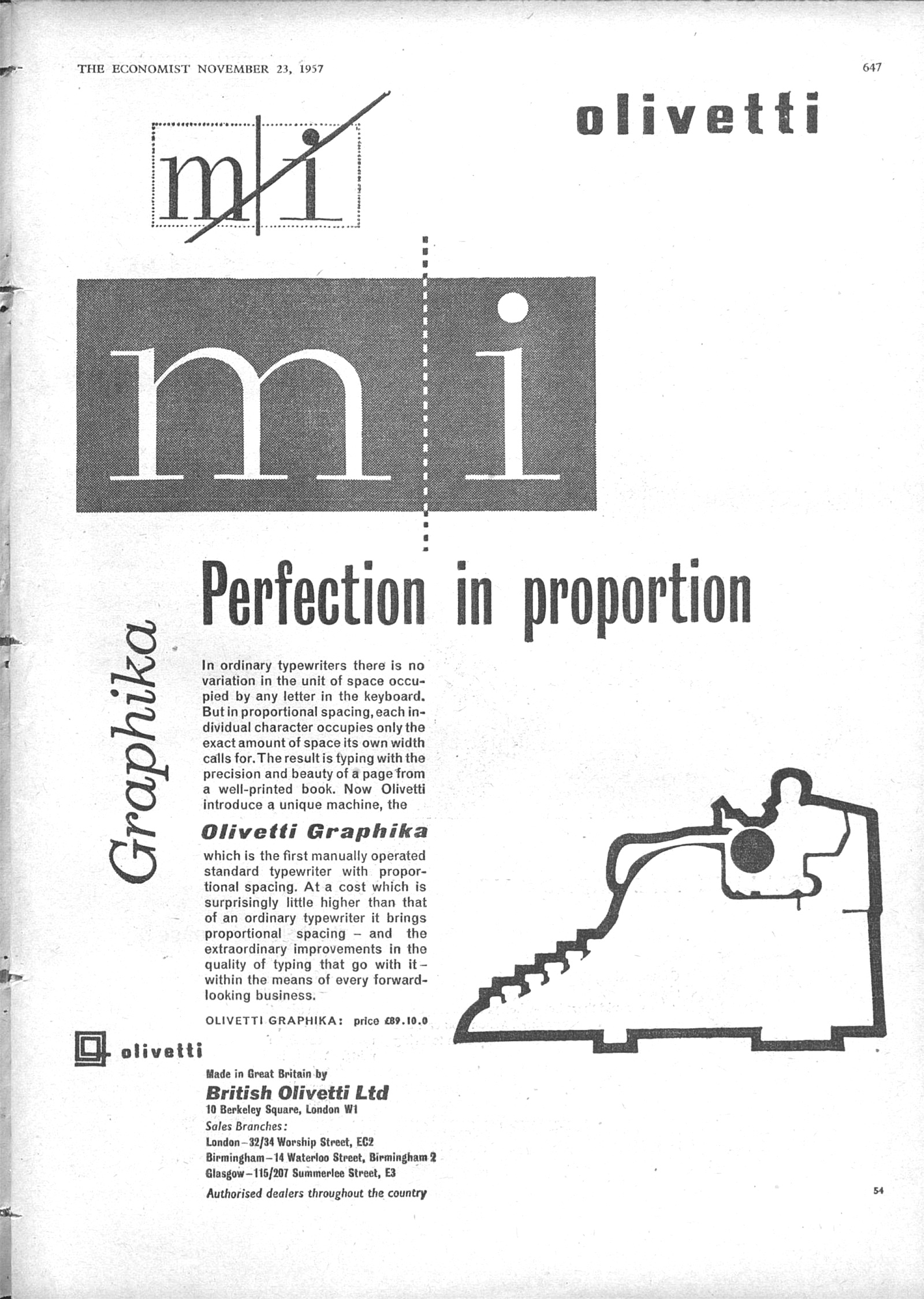 Proportional type was widely used in electric and electronic machines. But even before the appearance of the IBM Selectric in 1961, manufacturers had already made a few trials for the use of proportional fonts in mechanical models. For instance, A.M. Cassandre and Imre Reiner designed two typefaces that included four different widths for the Olivetti Graphika. And W.A. Dwiggins worked on the design of proportional type for Remington Rand. However, these first attempts were not successful; it wasn’t until the arrival of the electric models that fonts with several character widths had a visible presence in typewriters. The new printing devices — the golf ball and, later on, the daisy wheel in electronic machines — also introduced the possibility of using several fonts in the same machine, so the typist could create richer typographic compositions.

Every company had its own font library with a significant range of styles that fulfilled users’ varying needs. In America, the National Office Machine Dealer Association periodically published the Blue Book, a catalog with type samples and other information about the industry.

Typewriter sales grew fast and manufacturers offered typefaces for different scripts. Although the assortment of styles for non-Latin fonts was rather small, the typewriter market expanded and the machines were distributed all around the world. It was the democratization of typesetting and printing. The new technology allowed for the relatively cheap production of printed material. 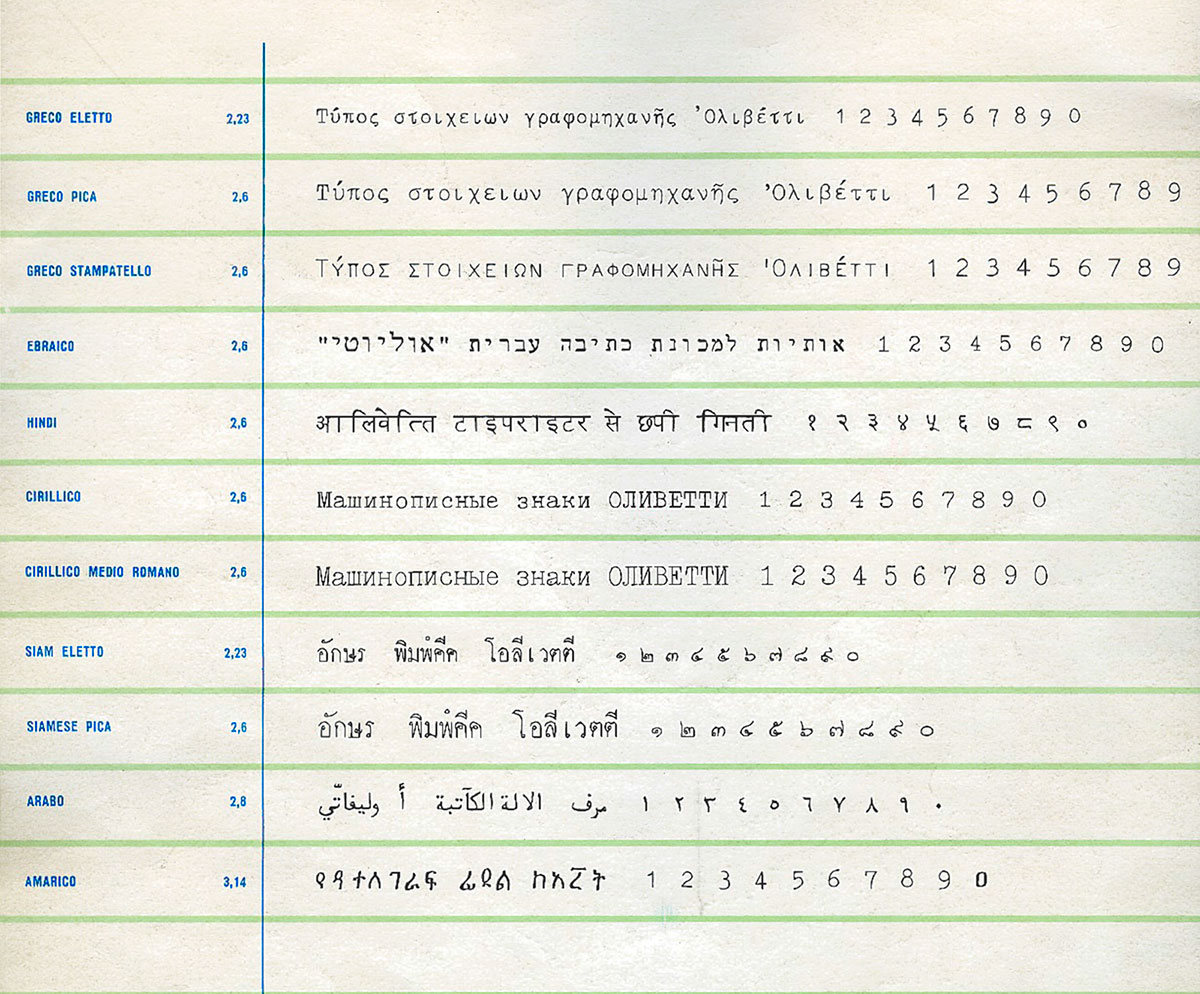 Monospace typefaces for different scripts included in a Olivetti font catalog (c. 1958). The number after the name stands for the width of the characters. © Associazione Archivio Storico Olivetti, Ivrea, Italy. Please do not reproduce without permission.

Many typefaces that were born with the machine also died with it; their design needed to be functional because the same typeface was used for different purposes. Users probably looked for fonts with a neutral appearance. Unconventional designs were not a popular choice and they vanished with time.

These days, “typewriter” is an umbrella term for typefaces with different design approaches. It includes fonts that try to imitate the appearance of typewritten letters, like FF Trixie (Erik van Blokland, 1991 and 2008) and Old Typewriter (Thomas Sokolowski, 1992). It also encompasses fonts based on models created for the machine, like Valentine (Stephan Müller, 2002) or Gridnik (Wim Crouwel, 1960s and The Foundry, 1997). Some typefaces used on typewriters were later adapted for computers. Among them: Courier (1955), Letter Gothic (1956), and Orator (1962), all of which were produced at IBM. There are also designs that, though not based on a specific model, nevertheless capture the soul of typewriter fonts, like Pitch (Kris Sowersby, 2012) or the recent Operator (Andy Clymer, 2016). We cannot forget to mention ITC American Typewriter (Joel Kaden and Tony Stan, 1974), the most prolific modern example of a proportional typeface that emulates typewriter fonts, which followed metal faces like Bulletin Typewriter (Morris F. Benton, 1933), a metal face that began as a monospaced typewriter simulation but took on proportional spacing in its phototype incarnation. In a specimen of this typeface from 1975, the text reads: “American Typewriter strikes a happy compromise with its forerunner. The rigid spacing is dispensed with, but the distinctive typewriter flavor is generously enhanced. And there is just enough nostalgia in American Typewriter to give it a top billing in contemporary typography.” Nostalgia and contemporary typography are key points here, and still tell us about the idea behind revivals, trying to bring something from the past to life with a modern look. Tap (Georg Salden, 1979) is another phototype face with a similar approach but slightly rougher contours.

Typefaces created for typewriters were designed with the limitations of the machine in mind. Despite the variety of styles created, most typefaces shared certain features. To fulfill the monospace need of mechanical models, letters sometimes adopted different shapes from printing type: for instance, the ‘J’ with a large tail aligned with the baseline; the ‘W’ and ‘M’ with a shorter middle joint; or the ‘t’ with a long curved bottom ending. The ink spread caused by the transfer printing method demanded large countershapes and a generous x-height. It was also very difficult to print high-contrast characters and sharp outlines with transfer printing. In typewritten documents, the corners and joints between strokes took on a rounded and irregular appearance. This led designers to create rather monolinear designs to get a more predictable result.

The irregularity in typewritten texts depended on different factors. The problem of both vertical and horizontal alignment, for example, was a common issue. Shown here: enlarged type sample written with an Olivetti Studio 42 using a Pica typeface.

Lowercase and uppercase letters of Elite (12 characters to the inch) typewritten on an Olivetti Studio 46.

Different arguments can be made to justify the definition of a design as a typewriter typeface, but the term can be confusing if it is used too loosely or lacks a clear rationale. It’s important to try to identify what defines a digital typewriter font. In my opinion, “typewriter” does not define a style, but rather describes a part of the font development process — the brief — in which inspirational sources play a key role in the design.

I hope this article will open up a conversation about the current use of the term “typewriter” in type design. It’s common to see “monospace” and “typewriter” used indiscriminately to name a typeface whose characters all have the same width. Monospaced typefaces have found a new niche in the digital type scene: programmers have found them valuable for coding. Such faces are created today with a different function and for a different technology than in the past. The problems type designers grapple with today diverge from the challenges posed by typewriter technology, and the result is a design with a distinct appearance. In these particular cases, the terms “monospace” and “typewriter” lose their connection.