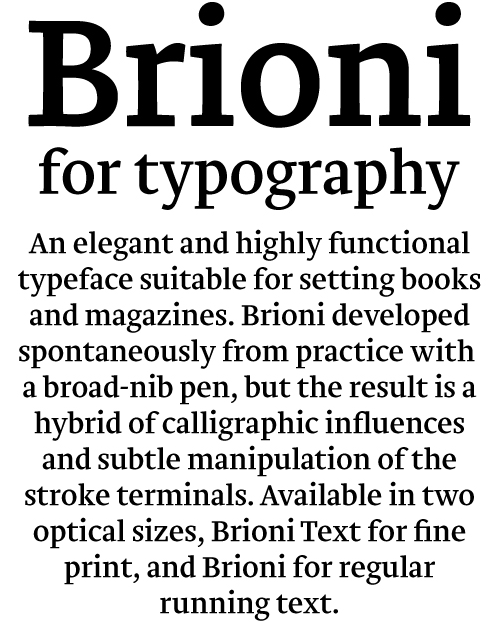 Nikola Djurek is difficult to classify. He’s Croatian, but a scant typeface design tradition in his own country sent him afield to Italy and the Netherlands to develop his skills. He is now based near Zagreb and maintains an office in Amsterdam. His Brioni can’t be pigeonholed, either.

Part robust serif, part slab, at once rigorous and warm, its strong calligraphic influence just under the surface, Brioni is a sober but friendly and eminently readable face that can cross borders and make itself at home in disparate contexts.

The family comprises two cuts: the robust Brioni Text and its higher-contrast counterpart Brioni, suitable for longer runs like books and magazines. A bit like another Typotheque face, Greta, Brioni Text performs well in the challenging environment of newsprint with its attendant registration issues. But the same proportion and color, the same generous x-height and modest ascenders and descenders, the same uniformity of stroke that recommend Brioni Text to newspaper printing lend it to another challenging low-res setting: digital display — making it a good choice for both print and web.

Brioni exhibits both great precision and a certain physicality: the touch of a human hand. It is the work of someone thoroughly comfortable with divergent ways of mark-making: from stone carving to calligraphy to Python. Two important magazine redesigns (Consumer Reports, Dwell) have successfully mobilized Typotheque faces of late. What new redesign will take the plunge with this versatile up-and-comer?