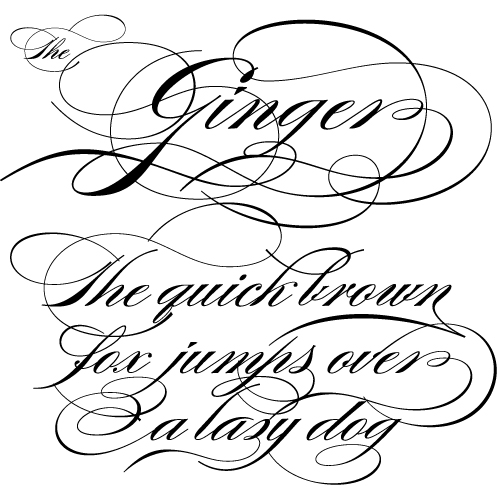 Creating a typeface that aspires to the blinding craftsmanship and pure ornamental beauty of Louis Madarasz is indeed a steep order to fill.

Ale pulls it off beautifully. The sheer challenge of regularizing such penmanship usually translates into digital typefaces that either lack rhythm or become so overworked that they lose their vivacity. This is not the case with Burgues Script. The expansive set of flourishes and sweeping, high contrast swashes carry the tension of the pen and aren’t afraid to intermingle and mix it up.

Editor’s note: Here’s a little story of a young type designer coming into his own. At TypeCon2007, Alejandro Paul was approached by living legend Matthew Carter who handed him a copy of the most recent New York Times Magazine and pointed to the pages adorned with Burgues Script. Carter’s attention was drawn to the typeface by art director Nancy Harris Rouemy who had been using it in the Style section of the magazine for months. I imagine Alejandro nearly fainted, and rightly so. — SC

Christian Palino is a designer and educator living in San Francisco. He is currently a Product Design Manager at Facebook and teaches Interaction Design at CCA. He previously worked at OpenTable, IDEO and Adaptive Path.