From new designs to revivals, 2012 was a banner year for Geometrics and Grotesques. Some I admired; others left me cold. Colfax charmed me.

I’m not sure how often “charming” is the adjective used to describe a geometric sans serif, much less one that is the proud descendant of DIN and Neuzeit. Yet I’m delighted by Colfax, the 12-member family from Process Type Foundry formerly called Chrono.

From the “implied geometry” (designer Eric Olson’s phrase) of its near-perfect circles to the almost-naïve simplicity of the figures in the lighter weights and the winking seriousness of its black, Colfax manages to balance rigor and expression in an unpretentious way.

Named after a street in the designer’s hometown of Minneapolis, Colfax will do an honest day’s work, setting a nice even gray for text; handling tables, sidebars, labels, and charts with ease; and happily throwing its weights around to provide contrast with other, more self-serious faces. But like the best colleagues, Colfax does it all with an easy smile that makes the heavy lifting a little less heavy. 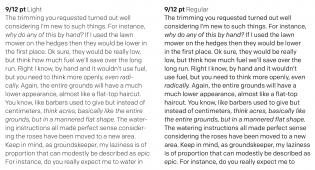