When I worked as a designer in San Francisco, I had many pitch meetings with tech companies that went something like this:

“We want to tell you our new business strategy.”

“It’s a secret, so you have to sign a nondisclosure agreement first.”

Sure, here it is.

“Remember that thing our competitor released three months ago?”

“We’re making our own version of that!”

Gee, now I understand why you’re keeping your plan a secret.

There is always comfort in emulating competitors. That’s why it’s common in any creative industry — whether it’s the technology industry or the type industry — for a trickling trend to grow into a flood of similar products. But the essence of competition isn’t similarity. It’s differentiation.

But what differentiates a typeface isn’t necessarily whether it avoids a trend. On the contrary, trends can light the way toward unexpected discoveries. For instance, who would have guessed that the 50-year vogue for Helvetica would yield the excellent Neue Haas Grotesk?

This is why I find discussions about originality in type design to be unavailing. Originality isn’t the quality most vital to lifting a typeface — or any creative work — above the crowd. Rather, the most vital quality is its capacity to surprise.

And that is the core achievement of Eskapade. Eskapade is a family built on a single lovely surprise: that a roman text face can have a fully realized Fraktur companion. Designer Alisa Nowak has gone about the project with discipline but a light touch, nudging the roman forms toward the Fraktur and vice versa, discovering the harmonies between.

While the roman and italic are well done, the Fraktur and its italic steal the show. Nowak has a calligrapher’s eye, and builds her Frakturs from confident, contemporary strokes that remind me of the work of Berthold Wolpe (in particular, his great but little-known typeface Sachsenwald). The ornamented Fraktur caps have a sense of exuberance but also restraint — everything ties back to the core concept.

Oh, sure, Eskapade also includes acres of accented characters for obscure languages. But young type designers, take note: Nowak has not made the mistake of thinking that breadth can substitute for depth. Eskapade is the work of a designer who has taken the time to study familiar things more closely than the rest of us, and who has distilled that knowledge into a typeface that asks: “Do you see what I see?” We do. 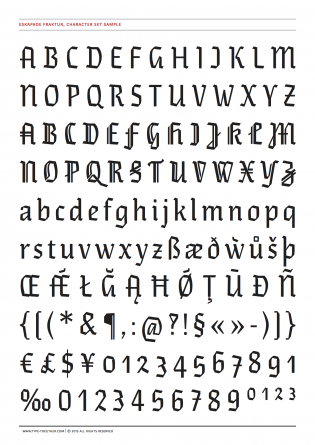 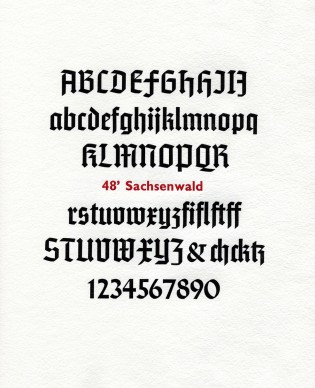