Typographica’s tweet got me curious. I felt competent and compelled to write about Klim Type Foundry’s Pitch, but was slow off the mark, Pitch had gone already — of course. Stephen encouraged me to choose another from 2012. My first urge was to write on a typeface I knew inside-out as a typographer, having used and explored its abilities. But none on the list, besides Pitch, fit this criteria.

Then I spotted ThreeSix by Hamish Muir and Paul McNeil, or rather, FF ThreeSix, as released by FontFont in 2012.

I don’t own the family of six typefaces in eight weights — not yet — so this review is a probe, as a viewer or reader might experience, rather than based on a first-hand exploration as a licence-holder/type-user.

Before delving too deeply, I allowed my connection with this compelling (and slightly overwhelming) optical and geometric type system that unabashedly transcends time and space, to come to the fore. I was immediately transported back to the hey-days of Hamish Muir, Mark Holt and Simon Johnston’s 8vo, their experimental magazine Octavo, posters for The Hacienda, Factory Records, the typeface Tephra (developed in concert with Dalton Maag) for Interact and later the Flux music festival. All were projects that profoundly shaped the language and culture of graphic design. Nostalgia blanketed me with the strangely familiar. In 2009, Bruno Maag composed his name in the eruptive Tephra to accompany his lecture and workshop at TypeSHED11, a typography symposium in New Zealand that I co-organised with Italy-based Simone Wolf. Again, I was beamed back to “those” days.

ThreeSix is masterfully layered with experience and intellect combined with a strong urge to invent a language system out of things geometric and spatial, using the simplest of rules. Intrinsic to this experimentation, is what I refer to as a “Sol LeWitt” — a certain obsessiveness that just won’t go away.

Most liberating is where FF ThreeSix heads off into the extremes: the reductive abstraction of 31 018 Thin, or the bubbling forms of 31 144 Black (used in the Design Museum exhibition poster Wim Crouwel A Graphic Odyssey). These wondrously organic constructions are far-out, non-conformist, and challenge the comfort zone. They are already developing the next one: FourTwo.

I can’t wait to see where the future development of the 1974-designed 20:20 takes MuirMcNeil — and us.

Catherine Griffiths is an independent designer and typographer who works from Auckland, and intermittently from Paris. Her work is a mix of visual communication design, self-published artist books, typography in public spaces, architecture and the landscape, and occasionally writing on design. 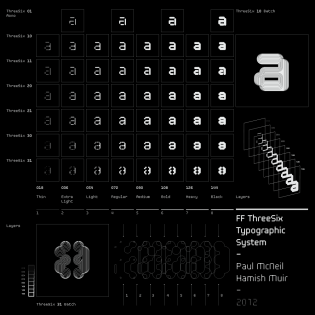