There’s something quite special about Berlin’s type design scene. It is probably the most colorful and international community of its kind on the European continent. (Only the type scene in London is more global.)

And it’s not just that — it also has a pleasantly but unusually large contingent of independent female type designers, many of whom combine an original and spirited approach to drawing type with sharp digital savvy. I hate to throw the word “feminine” at a typeface, because it can mean almost anything you want it to; but it’s often the women who come up with the liveliest and cheekiest script faces. That is no different in Berlin. Several of them work alone, doing both the outline creation and the OpenType programming, making smart use of crucial features such as context­ual alternates and automatic glyph substitution.

Julia Sysmäläinen is one of them, and she’s among the most versatile operators on the Berlin type scene. Her background is both Finnish and Russian; she is a native user of both the Latin and the Cyrillic script. She studied language and literature as well as graphic design (with some product design in the mix). While she recently published several scripts at Art. Lebedev in Moscow, and brought out the quirky text face Mir on her own Juliasys label, it’s her FontFont project FF Mister K that is best known. It combines several of Sysmäläinen’s fascinations: literature, writing, technology. The original FF Mister K, an astonishing flexible font based on the handwriting in Franz Kafka’s manuscripts, was followed by two varieties based on other samples from Kafka’s writing, which indeed look decidedly different — FF Mister K Informal and FF Mister K Splendid.

In 2015, Julia Sysmäläinen published yet another Kafka-based script. As she has written, her Josef K does not reference “the works Kafka created by night as an author, but … those he produced during daytime in his professional life as a high-ranking, confident bureau­crat.” And again, the resulting font is different in atmosphere, while having the same technical and visual sophistication as the other scripts. It’s loose yet confident; rather informal (for office handwriting) but regular and readable. It’s the kind of well-programmed OpenType font that is a joy to use — especially for those pages that involve not just typesetting, but writing your own text while you’re composing it. It can be just a headline; to see it change shape and propose new combinations and alternates at every stroke is pure delight.

Sysmäläinen decided not to add this Kafka variation to the FontFont series, but to keep it on her own label. I find Josef K Paneuropean to be a perfect expression of the Berlin attitude: expressive and practical; indivi­dual­istic and user-friendly; and wisely affordable, too.

Jan Middendorp is a type writer and page maker. He is author of several books about graphic design and typography including Shaping Text, Hand to Type, Lettered, Creative Characters and (with Erik Spiekermann) Made with FontFont. In 2018 he self-published a reprint of his succesful and sought-after 2004 book Dutch Type, which is now available again at the original price. 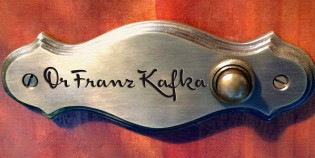