This review is about Kazimir. (It might also discuss or allude to: the state of Russian creativity. Bleached denim. Saint Petersburgian architecture. Gopniki. Poll taxes. Funhouses. “In Russia, Kazimir reviews you” jokes.)

Chances are you already know about stroke weight or text color. You appreciate type. You know at least the basics of how to look. The gorgeous specimens you see here will guide you through the specifics of feel and mood. Thus, the most valuable light I can shine on Kazimir is to ground it within certain contexts.

Like many other Peter the Great innovations, the contemporary Cyrillic alphabet was created through brute force, against natural inclinations, via a crude pantomiming of the West. Maxim Zhukov states that “in Cyrillic type, the chirographic aspects take a backseat to invention and engineering”. This immaculate conception, whatever its downsides, provides a treasure trove of play and opportunity for designers working with Cyrillic, and I’m enlivened by authentic, talented, knowledgeable hands painting and pushing the alphabet into new and old corners of refinement.

Russian type, like Russian culture, has an interesting relationship with the West. Before sitting down to write this, I brought up the font and its place in the canon with anyone willing to engage. An excerpt from one Moscowite: “Being Russian to the bones, Kazimir clearly thinks of itself as European, with obvious French influences”. Where so much of Russian (type, fashion, architecture, urban planning) seems to come out as a fun-house mirror take on the West, because of the mirror’s lack of traditional laws of physics and gravity, the effects can often reach beyond and fly atop the heavier limitation of the original. Thus resulting in a creation both uplifting and inspiring, and very much its own.

And Kazimir, a gold plaque along that journey. Historically inspired, Kazimir fits in an area of type that goes almost unrepresented in the digital landscape. It contorts the glyphs into positions that feel at ease, reaching their final setting via a route that knows the rules, and exactly when to break them. Look at the horizontal bar atop that ‘k’! The connecting stroke on the lowercase ‘ы’! Those forked snake tongues that are so accurate historically, yet commonly swept under the rug! The fact that both the ‘R’ and the ‘Я’ in the irregular set feel reversed, yet seem balanced! Reverberating an oft overlooked typographic time and place, it transports me to the gardens and palaces of my hometown, with its self-serious flourish, and manages to vibe both historical and fresh. 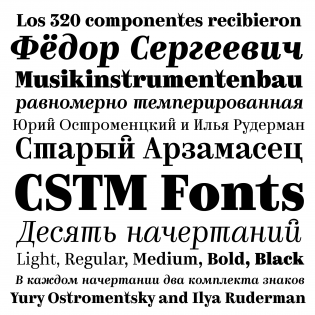