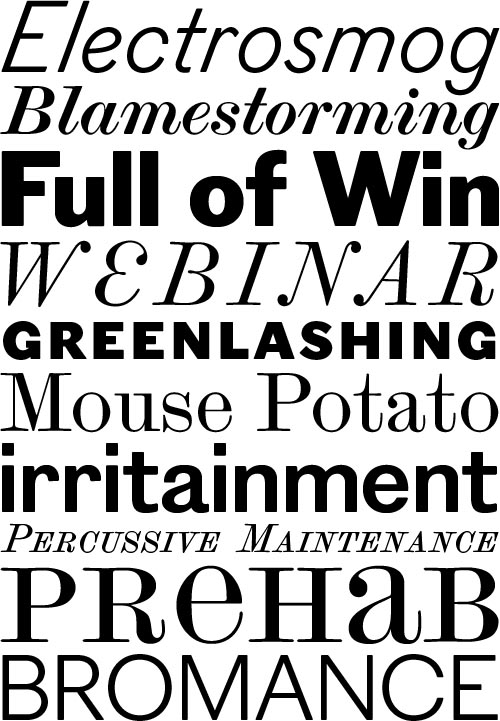 I have long been an admirer of faces such as Modern No. 20, DeVinne, and scads of others generically called “Modern”.

The style was very popular in the 19th century and is distinct from the Bodonis, Walbaums, and Didots. But it lost favor in the 20th century. As a result, such faces tend to have rather incomplete families, usually having only a roman and italic.

Nick Shinn comes to the rescue with his insanely complete Scotch Modern, which includes three optical sizes, extensive language support (including Cyrillic and Greek), small caps, old style figures and loads of other typographic goodies. As a type designer, I am astonished at the amount of time and care that must have gone into it.

As if that were not enough, Nick has also created a companion sans called Figgins Sans, based on a late 19th century contemporary of the “Scotch Modern” style. Figgins Sans is a style of sans serif that was eclipsed by the grotesques and grotesks that became so popular in the 20th century. It’s great to see this style of sans return to the typographic palette after a century-long absence.

The two families complement each other nicely to form the Modern Suite. I hope Nick continues to add to this suite. Perhaps a slab serif or fat face?