If you were to Venn diagram goth teenagers and type designers, at the nucleus you’d find a certain preoccupation with cemeteries. For type designers, cemeteries offer a treasure trove of individually and skillfully carved letters, inspiration for future releases. For František Štorm, there’s a chance it might be a little bit of both callings. (While not a teenager, in his spare time Štorm headlines the black metal band Master’s Hammer.)

St Croce’s birthplace is on the tombstones in the Basilica of Santa Croce in Florence. Rather than reverse engineering the wear that the lettering has acquired over past centuries, the design of St Croce folds the deterioration into the font. (Zapf’s Optima was inspired by those very same tombstones, to a much different result.) What results is a design that’s elegant and refreshing.

Where most stencil-style fonts are pushed into existence by way of careful rules and technical demands, St Croce is pulled along by observation. Time erodes with grace; wind and wear aren’t concerned with formal exercises. For St Croce, this translates into a natural and compelling dynamic within the letterforms. There’s leniency, the strokes modulate, and hairlines are used for clarification (making the face best suited for print and digital as opposed to spray-painted stencils).

I’ve always been fascinated with design that embraces use and aging (Bethan Wood’s coffee cups), in contrast to design that goads us with geometric precision (the iPhone, with a fragile shell that loses its sleek futuristic appeal after the first inevitable fall to my concrete floor). There’s honesty and humanity in celebrating imperfection, and St Croce lends itself beautifully to that tradition.

St Croce Light is available for free, with five other weights starting at 22 Euros. 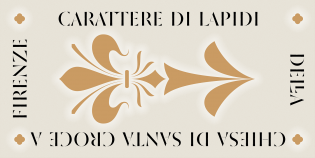