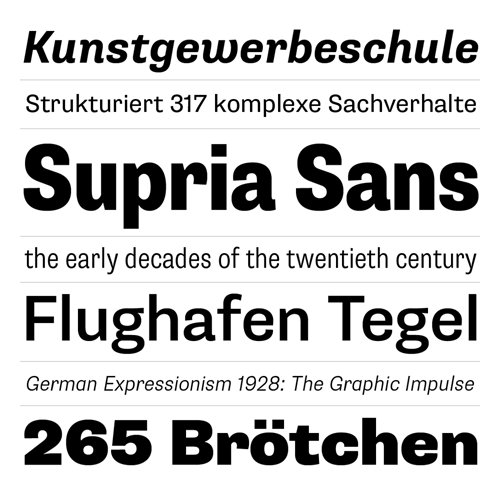 Among recent Grotesque-inspired releases and Hannes von Döhren’s rapidly growing oeuvre, Supria Sans stands out to me as an especially interesting and useful addition.

The design has just the right amount of character to be memorable and unique but also restrained enough to remain thoroughly useful. Bypassing the polished rationality of Neo-Grotesques, it builds upon the hearty solidity of 19th-century faces, a heritage revealed in the curled-in jaws of glyphs like the ‘C’ or the faucet-shaped ‘r’. While some details seem quite charming, the design never gets coquettish. With its blunt inktraps, tight curves, and solid weight, Supria is ready for work.

Despite this crafty atmosphere though, its rolled-up sleeves don’t get uncomfortably sweaty. Apart from older roots Supria also appears informed by recent, softer approaches to sans-serif design, and steers clear of the sharp, sometimes clumsy vintage chic recently en vogue. With its idiosyncracies tamed just enough, this design is firmly anchored in a contemporary context. There is definitely no smell of mothballs here, but rather a fresh breeze of menthol. I’ve found Supria to feel decidedly fresh, especially when set in text, and more clear and angular than its details might suggest in large display settings.

A design that harmoniously balances such diverse stylistic factors promises to be excitingly versatile. This, along with Supria’s impressive range of styles, including a Condensed variant and the all-too-rare choice of two italics (a curly Italic – likely too cute for some applications – and a more rigid Oblique), makes it an attractive candidate for more complex typographic projects too. A winner at the 2011 TDC2 competition, Supria Sans altogether strikes me as a convincingly versatile, mature, and well-conceived face.

Nina Stössinger is a graphic/typographic/type designer based in Basel, Switzerland. She spends her days writing and designing for web and print at her own studio and many of her nights designing typefaces. 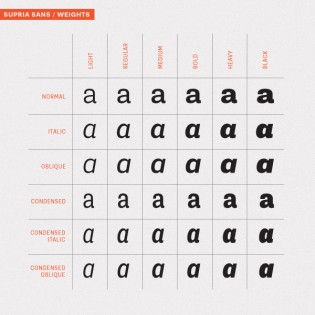 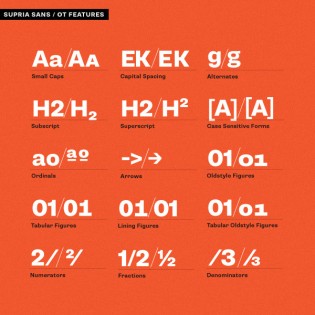 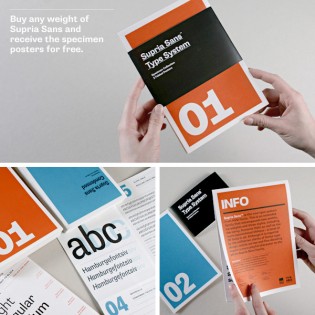 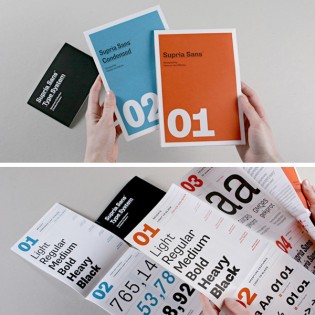 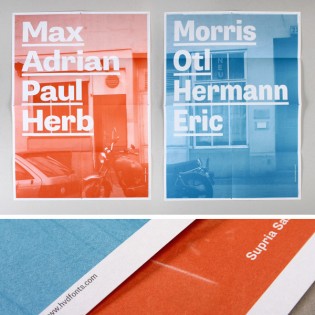