By my best estimation, at least 1,800 new commercial typefaces were released in 2006 alone. This count does not include freebies, custom and proprietary commissions, or even individual weights. It is a rough tally of the number of new font families released by the major resellers and exclusive foundries last year. If we take this fresh meat and trim the inevitable 90% that is unusable fat, we are still left with hundreds of quality new typefaces, most of which will never get ink from a design magazine or a blurb on a blog. With so much stuff hitting the market, the need for a font filter has never been greater.

The sheer volume of new fonts is one reason why this year’s list is so long and so tardy. We also cover more ground this time around, looking back another six months into the half of 2005 that last year’s “Part One” review didn’t cover.

The result is a set of 23 font releases that inspired our group of type designers and type users to pen their praises, and in many cases, to pony up some dough.

I think you need to lose your type design licence if you produce a font with the same “metrics” as an existing font. (Or we can just nominate you for the CompuGraphic Memorial Trophy for Derivative Type.) Sort of like PostScript Arial’s matching the widths of PostScript Helvetica, Mayberry claims to “emulate the technical behavior of Tiresias”.

Aficionados will know that Tiresias Screenfont — the variant referred to here — is the failed typeface used in the United Kingdom for captioning (not “subtitling”, as they errantly call it). This extravagantly expensive font — up to $15K for a worldwide licence — still doesn’t have an italic and is based on junk science. Seriously, they tested a screenfont for captioning by showing printouts to grannies through a closed-circuit monitor. (And they changed the font halfway through the test.)

So: a clone of Tiresias, or “the technical behavior” of it, is bad enough. But it’s been done! Monotype has its own Tiresias clone, Tioga. Mayberry is a clone of a clone. And, from a design standpoint, they’d all be B-minus assignments in the second year at Reading. 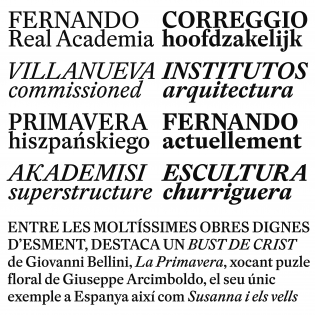 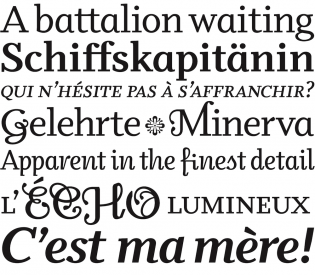