A Fruitful Discomfort: The Face of the 2012 Olympics

The visual identity of the London Games was uncomfortable, like a shattered stained-glass window. But iconoclasm does have its fans; and the more ways we can look at something, and look through something, the better off we are.

The stated intent of the London Organising Committee of the Olympic and Paralympic Games (LOCOG) was to focus on youth; naturally this extended to the visual identity system, the centerpiece being the logo, which has received little love. The logo’s severe angularity does not mesh with the reality that for virtually everybody (except the parents of athletes) the Olympics constitute a pleasant vacation, or a comfy staycation – they’re not about stress or tension. Television “censorship” attests to this clearly, and this clash might be what puts people off.

To me the logo looks like how middle-aged men (coincidentally my own demographic) tend to feel about teenagers: uncomfortable. The logo also makes me think of the 1980s ski boots I once bought via Craigslist. And the Opening Ceremonies also betrayed the reality of who consumes the Olympics, of who the customer is – and it’s not young people. Looking at it that way, the logo just might be perfect. And adherents of the maxim “there’s no such thing as bad publicity” require no justification beyond the fact that the logo is indeed highly memorable.

2012Headline by Gareth Hague, the official typeface of the 2012 Olympic Games.

What is also memorable is Gareth Hague’s typeface for the London Olympics, 2012Headline. Besides being fervently discussed – and ridiculed – in typographic circles, it was also featured in the mainstream media, both at home and abroad. Unlike the logo however 2012Headline is quite difficult to wrap one’s head around. If you look at it as a formal outgrowth of the logo it just might make perfect sense. But if you look deeper, if you consider its genesis, it feels very different: uncomfortable. Fortunately it has one superb redeeming quality, one that’s highly relevant to the enclave of typeface design…

The logo of the London Olympics is based closely on Hague’s Klute typeface of 1997, a unique design that draws ideas from blackletter and graffiti. And in the context of the Olympics it’s possible to imagine the influence of Ancient Greek lettering on 2012Headline. The inherited visual language of the Olympics also seems to be what caused the “O” and “o” to be circular (inspired by the venerable five-ring symbol), a direct formal contradiction with every other glyph in the font. Hague reveals that the circular “o” was supposed to be an alternate; he had provided the expected angular “o” as the primary form.

It’s easy to agree that using the circular “o” was a confused, bad decision. I figured to see if that’s really true, so I decided to make an angular “o” glyph based on how I interpreted the font’s “internal consistency”. The first one I made didn’t have very happy proportions, so I decided to bend the rules and make a different one, which I found less jarring.

This one I subbed into the logo and was pleasantly surprised to conclude that opting for the circular “o” was a good decision after all – it seems to add a nice softness, whereas the angular one might just make the whole too mechanical. Olympic Games logos come and go, but apparently the rings are forever!

Although 2012Headline was designed after the logo was approved by LOCOG (so was presumably constrained to being a follower and not a leader) according to Hague himself the only thing the two typefaces share is a general angular spikiness; no blackletter, no graffiti, no Greek. But people will see what they see – the designer is never around to tell them what to think. What I myself see most prominently – something shared by Klute and 2012Headline but virtually no other design – is what motivated me to write this article: it might be a better way to make an italic.

Italic has long been a personal sore spot – to me a sort of drive-by shotgun wedding. Roman and italic might be able to tolerate each other after all these years, but pairing them up was still a bad joke. Now, if they can indeed tolerate each other, why worry? It’s a bit like the search for an energy alternative to fossil fuels, with its tinge of desperation. But to some it does seem like an alternative is the only way forward, or at the very least a break from the despotism of cursiveness being at the heart of emphasis in running text. The unduly reviled slanted roman has had its champions and svengalis, but even if I for one believe that can be an answer, it cannot be the only answer. And one answer might just be rotation, which is essentially what makes 2012Headline (and Klute) so special.

Gareth Hague might not have invented the idea. The passing of time has only cemented Frederic Goudy’s “the old fellows stole all our best ideas” and this is probably no exception. One can easily imagine the ATF boys making rotated glyphs a century ago with a quick adjustment of the pantograph – they certainly did everything else with it. Also, neither Klute nor 2012Headline can serve for emphasis since they have no roman. Rotation as a means of emphasis – dubbed “rotalic” – seems to have first been floated by Filip Tydén, but that was a decade after Klute. Also, virtually all rotalic fonts have been created via brute mechanical rotation, and thus deserve the derision they typically engender. This is clearly not the case with 2012Headline – it’s been designed with intent. So Hague deserves credit for applying the idea quite early with Klute, and maturing it before anybody else with 2012Headline.

Jackson Cavanaugh plays with an italic from his Harriet Series.

As with any novelty, rotalic’s potential for ridicule is great; people like to have fun. This is the sort of ridicule reserved for things that can be consciously evaluated by everybody: display fonts. The magic of text face design kicks in when novelties are applied so subtly as to escape general rejection… although there is no escape from rejection by some fellow type designers. We are now seeing a trickle of rotalic fonts including one that elevates the style to a fully respectable level: TypeTogether’s Eskapade. 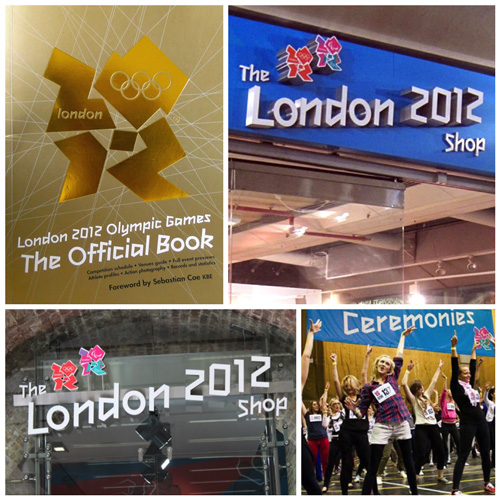 Perhaps unsure what to do with the unusual orientation of 2012Headline, Olympics designers often resorted to a rotated baseline.

For many people however letters that seem to be falling over are… uncomfortable. So much so that many applications of 2012Headline – including high-profile ones – have resorted to rotating lines of type counter-clockwise, effectively eliminating the slant, even though the result is an often awkward “uphill” line of type. Then there’s Hubert Jocham’s Keks: older than 2012Headline but more recent than Klute, it seems to vie for the same sort of angularity, but critically without the “discomfort” of rotation. In a way Keks is to 2012Headline what Excoffon’s Chambord is to Peignot: they share a style, but the former avoids the latter’s iconoclasm (Cassandre’s design was nothing less than an effort at alphabet reform), resulting in something easier to sell. In fact it’s nice to imagine a retrofit of 2012Headline that would serve as an italic for Keks (similar to the genesis of Triplex Italic), which might become a first in terms of having a roman and an italic that are equally slanted!

It’s not possible to see 2012Headline as a text face, or even as an italic for a text face. But anybody who can see in it something that will enrich typeface design, that will perhaps propel a new generation of italics, is better off. To quote from a poster made by Hague promoting Klute: “It’s not what this is that’s important, it’s what it could or might be”. This is nicely parallel to a founding principle of the Olympics: “The most important thing is not to win but to take part.” Let’s not worry merely about making sellable fonts – let’s see where 2012Headline can take us.