The Last Time the US Considered Copyright Protection for Typefaces

The United States has the dubious distinction of offering no copyright protection for the design of typefaces — at least not in their visual form.1 With the advent of digital fonts, type manufacturers found a way to protect their intellectual property by submitting typefaces for copyright in a format the government did accept: as font software, the computer instructions for placing the points and drawing the curves.

It was under this definition that an oft-cited 1998 infringement case was decided in favor of font maker Adobe over SSI, a company that cloned digital fonts. This workaround is now apparently in question. A change was revealed earlier this year that would essentially delegitimize fonts as software, requiring “each line of the software code” to be “written by the author”. The development caused some type designers to wonder if US lawmakers might ever reconsider the question of whether a typeface design itself should be legally protected.

Perhaps the last time this happened was in 1975, when a judiciary subcommittee from the House of Representatives held hearings on the subject. I recently discovered that the statements and transcripts from the proceedings are all available at the Internet Archive, thanks to a scan contributed by the Boston Public Library. For type lovers, it’s a wonderful document, packed with fascinating evidence, arguments, and dialogue.

While most companies in the industry made their money from typesetting equipment — such as Mergenthaler with its Linotype machine, or manufacturers of phototype machines — ITC was the first corporation to depend on revenue from font licensing, so they naturally led the cause for copyright protection of type design. Earlier in 1975, backed by the AIGA, they advocated for their position in U&lc (Vol. 2, No. 1), a publication widely read by graphic designers. Then, in July of that year, they took their case to the government.

In a letter to the the subcommittee, the US Register of Copyrights at the time confirmed that it was a discussion worth having.

“I call to your attention the recent, very strong movement among individuals and groups of artists (painters, sculptors, and creators of fine, graphic and applied art) for more effective protection. Proposals have been advanced for amendments to the copyright law for this purpose, including registry schemes and opportunities for artists to share in the profits for later sales of their works. I believe these proposals deserve to be heard by your subcommittee.” — Barbara Ringer

As one might expect, the congressmen had difficulty wrapping their heads around the concept of original typeface design.

It’s interesting to read Abrams’ and Parker’s responses as they do their best to explain the concept to Wiggins and the other members. One of the company statements submitted to the subcommittee contains a now-famous summation of the craft:

To my knowledge, this is the earliest appearance of a quote often credited to Matthew Carter or Walter Tracy. It’s not clear if either man contributed to this document, but as staff at Mergenthaler, they may have. The author could also be Steve Byers, Mergenthaler’s Director of Typography at the time. 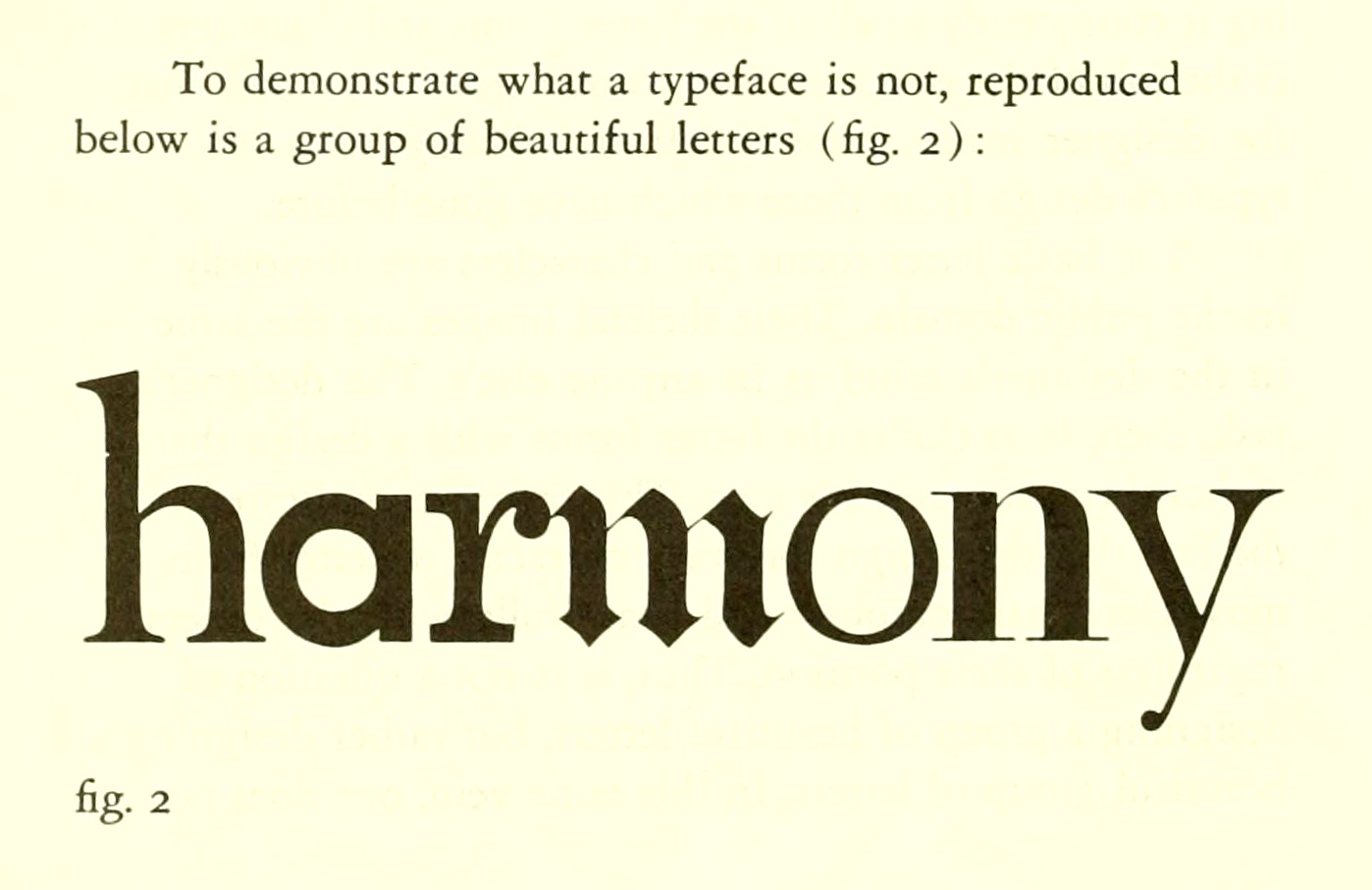 Not all type manufacturers presented statements in favor of copyright protection. Castcraft Industries, a Chicago outfit that copied designs in metal, photo, and later digital, was obviously opposed. Among the arguments made by their legal representative was this strong one:

“The Copyright Office would face tremendous difficulty examining originality and creative authorship in typefaces, since the requirements of such examination are beyond the capability of the Copyright Office as presently staffed.” — Howard B. Rockman

Mergenthaler also refuted Dan X. Solo, the prolific replicator of old type who had submitted a 1974 argument against copyright protection.

There are many other interesting tidbits in the supporting evidence submitted by the witnesses. Appended to Mergenthaler’s statement was an article by James Mosley on classification systems, prefaced by this comment:

The government never took Mergenthaler up on that offer; otherwise, we’d have yet another national classification system to add to the pile.

I haven’t finished reading the long proceedings from the multiple hearings, but I am sure there are many more nuggets to be found. Please comment with your own discoveries below.

A while ago, I stumbled on these hearings while searching for something completely unrelated. Normally I’d just dump a link in Twitter, but there is so much good stuff in the document to share it would turn into a long string of tweets, which is not really what Twitter does best. So consider this an experiment — a return to Typographica for content that’s better suited to the blog.