Is What I See What I Get? — Math & Optics in Type Design

Every so often, I’m preoccupied by the question, “Is what I see also what I get?” I catch myself thinking that there’s a discrepancy between what I “saw” and the information my eye actually took in.

The differences between reality, what I see, and what I think I see are especially important to consider when dealing with type. A simple yet fascinating example of a “misperceived” reality can be found in the optical perception of horizontal and vertical bars of the same width. In Detail in Typography, Jost Hochuli states:

For a given weight of line, a horizontal line appears heavier than a vertical line. To achieve optically balanced verticals and horizontals, which appear to be of the same weight, the horizontal must be somewhat narrower. This applies not only to straight lines but also to curves.1

It may come as a surprise that most people can only perceive this phenomenon when they are made overtly aware of the discrepancy. Helvetica’s ‘H’ and ‘S’ offer another example. The crossbar of the ‘H’ is set slightly higher than the center in order for it to appear to be in the middle of the letter. Similarly, the lower curve of the ‘S’ is slightly larger than the upper one, so that the two appear equal in size. If you rotate both characters 180 degrees, the differences become apparent immediately.

By rotating glyphs, such as these from Helvetica, one can immediately see the optical corrections that make top and bottom halves appear equal.

In both of these optically corrected examples, observers do not “see” reality. Instead, they perceive something close to symmetrical letterforms. Observers will most likely only notice the discrepancy if it is measured; when an immediate comparison is given; or, as in the example of the letters ‘H’ and ‘S’ above, with the help of inversion. Otherwise, they are convinced that what they see is mathematically correct. Even if you have many years of experience with optical illusions in the context of type design, you may still stumble if a perceived reality is challenged. In his book Kursiv, Hendrik Weber notes a great example. When Gerard Unger produced his typeface Hollander Kursiv, he slanted the individual letterforms at different angles so they would appear parallel.2

Even if you are aware of this fact, it is impossible to see through this optical illusion without helper lines that trace the degrees of incline. The discrepancy between the angles can be demonstrated easily using Adobe Garamond with the addition of such helper lines. 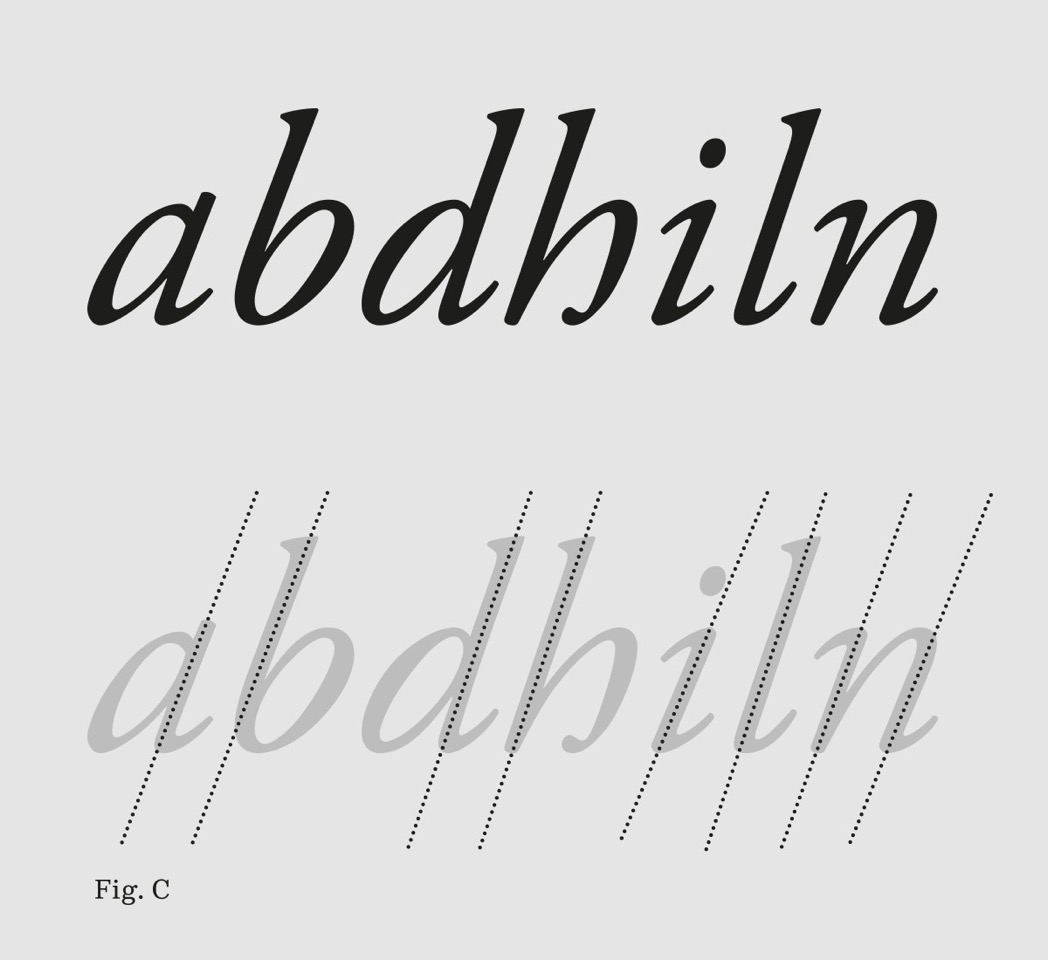 The slant angle of Adobe Garamond’s stems appears consistent, even though it is not.

There are many examples of this kind that are either consciously or unconsciously manipulated by designers, especially for fonts that are intended for body text. For that reason, it’s always wise to subjugate the mathematical reality to the “seen” or “optical” reality.

Consider the following situation: a painting is to be hung on a wall. Unfortunately, the floor and the ceiling are not parallel to each other. A discussion starts: should the painting be hung with the aid of a tape measure or the naked eye? If it is hung using a tape measure, one may feel satisfied that it is hung “correctly”. However, the painting will most definitely appear crooked. If it is hung using only the naked eye, it can be hard to shake the feeling that it is “off ” somehow. Luckily, this is only a dilemma for the people hanging the painting. Unknowing observers are unlikely to notice that anything is off. The painting will hang “true” in their perceived reality. This is exactly the intent of fonts created for reading, and not for “being seen”. New technologies have made it easier than ever to create fonts that are mathematically precise, tempting people to trust the “tape measure” rather than the eye. It takes courage and knowledge to recognize that the perceived exactitude of the eye is more accurate than the measured “truth”.

The human eye is an organ that has evolved over millennia — to a level of perfection that even Charles Darwin, despite his theory of evolution, had trouble coming to terms with: “To suppose that the eye, with all its inimitable contrivances … could have been formed by natural selection, seems, I freely confess, absurd in the highest possible degree.”3 Vision is one of the most powerful senses we possess. We should learn to rely on the eye, even though the tape measure may offer a different opinion.

This essay was originally published in m0ire, Issue 3. Translation from the German by Matthias Suchert and original copyediting by Lauren D. Weinberg.

Making the measured truth a visual one is the alpha and omega of type design. Some other well-illustrated meditations on this include Ian Moore’s “Making Geometric Type Work” and Tobias Frere-Jones’ recent series, “Typeface Mechanics”.

Anton Studer is a typeface designer and cofounder of the Nouvelle Noire Type Foundry. Since 2015 he is staff member at the Master course in Type Design at Zurich University of the Arts. Follow him on Twitter or on Instagram.