Of Branded Voices and Funny Hats: A Closer Look at YouTube Sans

When I saw YouTube’s new proprietary typeface recently, I couldn’t help but post an exasperated little rant on Twitter. I’m not particularly proud of my comments, which weren’t as constructive as they could have been — but I’ve been surprised at the echo they received, especially against the backdrop of scant online critical discussion of YouTube’s effort. So I wanted to follow up in more detail and depth.

YouTube Sans on the YouTube TV site. The type is used for both headlines and smaller text.

To be honest, the fonts strike me as subpar executions of a shallow concept. That would make them neither the first nor the worst of their kind. But as a type designer fascinated by how powerful good type can be, I find it frustrating to see a level of quality that should easily be surpassed by such a high-profile client and the firms that worked on the project: Saffron Brand Consultants, Letterjuice, and URW++. I don’t relish calling out a specific design or the people who worked on it; my hope is that we can use this as an opportunity to talk about how we might encourage and promote high standards in custom type design. 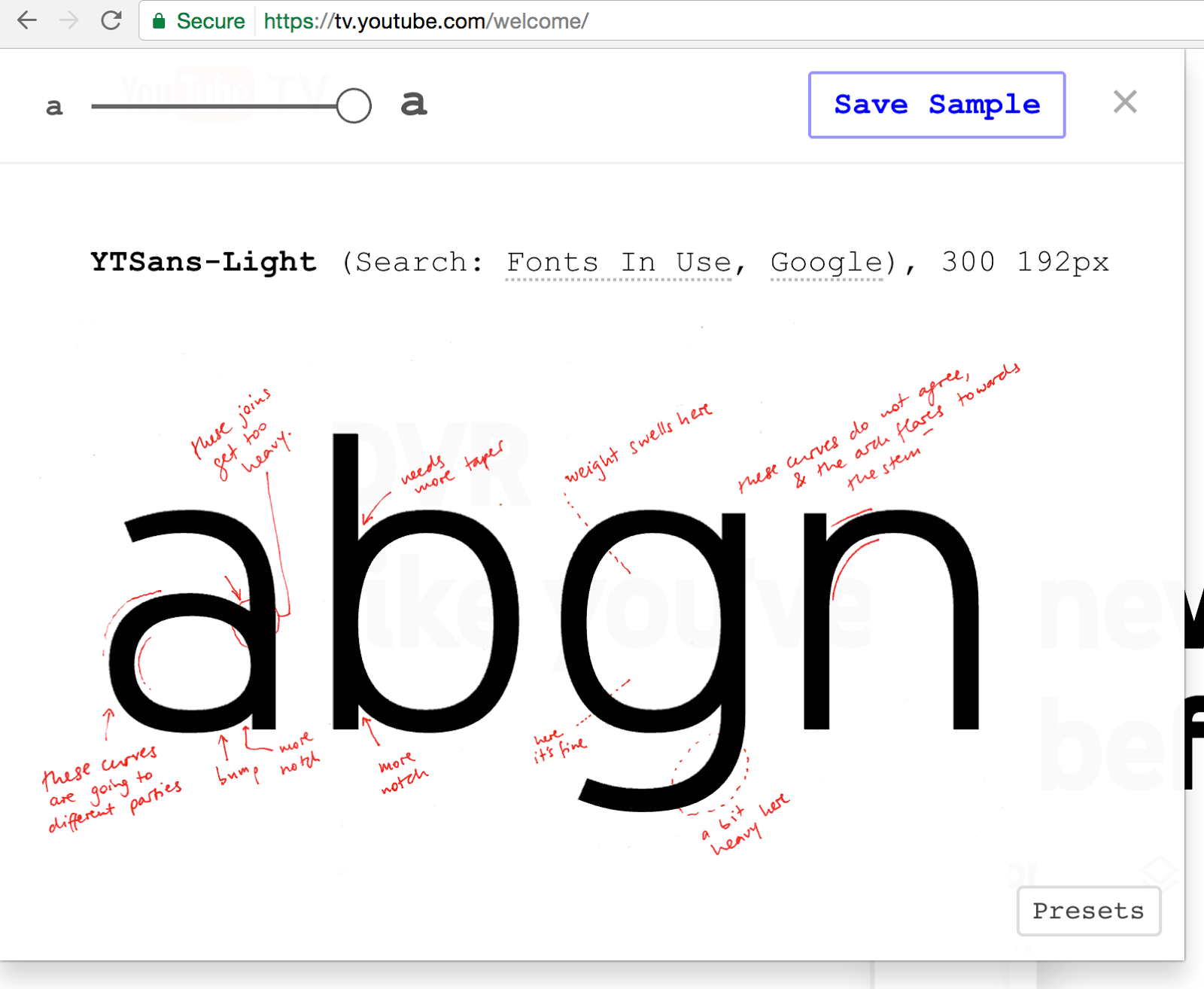 The TypeSample Chrome extension is helpful for studying the type used on a website. Some typical drawing issues with YouTube Sans stood out to me.

Let’s take a closer look. To begin with, basic issues of execution hold the design back. Many of the curves are bumpy, with inner and outer contours that don’t quite agree; curvature and weight feel inconsistent. Throughout the design, joins of arches and bowls with their stems are inelegant and tend to clog; they’d have more breathing room with better optical compensation — if the rounds were tapered more toward the intersections. Some letters (like the s, a, e, w, or W in the bold weight) stand out for being too heavy overall, and the weight of many diagonal strokes is not ideally balanced. Width relationships, too, stumble occasionally, as does the spacing, which is also so tight that it seems more tuned to headline sizes than to running text. The kerning is incomplete, causing collisions and gaps even in the text actually used on the site (like in the headline in the initial screenshot shown above, where one of the two apostrophes floats in ample space while the other one bumps into a neighboring v). These are subtle details, yes — but they form a vital foundation of the job. Type design is also mechanics, tuning little shapes to accommodate — and ideally please — human eyes and brains.

In use at tv.youtube.com, these fonts are saddled with a tough challenge: they need to cover a wide range of sizes, down to 13px text in light gray. At the small end of the spectrum, the type looks distinctly unhappy; it’s spaced too tightly and its rendering struggles under Windows.

Screenshot from Firefox on Windows (taken by Ben Mitchell).

The concept of the type design claims to be rooted in YouTube’s iconic Play button logo, itself gently (and quite nicely) refreshed. First, the curve tension in the rounded letters is ostensibly meant to allude to the button’s superelliptical outer shape (or maybe just the rounded corners). The correspondence does not appear to have been carried very far in what has become a rather generic, slightly squarish, sort-of-humanist sans.

Second, the other intended echoes of the Play button — the diagonal cuts on capital stems — are carried further, and it’s not a good thing. Tying the brand’s visual identity together by injecting a reference to the Play symbol into the typeface in the form of diagonal/pointy features might seem like a good idea at first, but the way it plays out comes across as contrived. I wonder if transplanting a slanted line from a triangular symbol (where it serves to point) onto stem endings on a set of letters makes it too much of a different element to be intuitive as a reference. The slant loses its function; in its new type-design context, it instead initiates a theme of sharpness and aggressive pointiness, which seems incidental rather than intentional and keeps feeling out of place.

It also feels tired. Cutting off random corners of letters is such an overused device in branding (and especially in logo design) that it has become possibly the most predictable — and least unique — way to mark letters as “unique.” From a type-design perspective, such shears often feel arbitrary and forced. Sure, there is precedent for angled cuts on vertical stems — more frequently in the lowercase, usually angling upward, deriving from pen angles, and playing out in various type styles (typically with serifs). Among sans serifs that have such cuts, Interstate comes to mind as a successful example, as does FF Meta. Kabel is a rare instance where even capital stems sport slanted cuts. This is tricky stuff, though. It needs to be thoughtfully deployed and carefully balanced with the rest of the design; YouTube Sans, I’m afraid, does none of these things. The shears occur prominently on vertical stems of capitals, where they are least plausible and hardest to pull off. Their apparently arbitrary flips of direction make some sequences of letters look like a confused jumble. Their angle is also much too steep. By not flattening out in the bold weight, the angled cut ends up removing too much of the mass of the affected stems, creating problems of balance, rhythm, density, and optical alignment. It altogether seems too dominant and foreign a feature, one that clearly originated outside the logic of the type design itself and was forced onto a system of shapes that didn’t get much of a chance to respond or coalesce around it. The poor font ends up looking like a rather quiet character made to wear an aggressively funny hat.

The logic of the slants — where they occur, and in which direction — seems arbitrary. Moments where pointy shapes could result more naturally from existing shapes (like at the ends of diagonals as in the K or X, or at the apexes or vertices of letters like M, N, and A) were mostly passed up.

On a deeper level, this points to a too-literal transposition of formal ideas from graphic design to type design. Typefaces tend to coalesce into a convincing whole more easily if the intended voice, texture, and functionality are allowed to determine the precise form of the features, rather than vice versa. In a good typeface, ideas and themes will thus play out in variations. They anchor and reinforce themselves across the design in ripples, echoes, and overtones that strengthen its internal logic and coherence. The idea is to build a team of little shapes that agree on a design direction, form a coherent texture, and speak in a predictable voice, even if they don’t all wear the exact same hat.

In the context of YouTube Sans, this could have meant deploying the shears — if they’re really necessary — in a more restrained and cogent way, standardizing their direction and flattening their angle, at least in the Bold. It could have also meant anchoring that feature and the sharpness it implies elsewhere in the design to make it feel more at home, and negotiating between it and other moods and features with the goal of making the voice of the design balanced and identifiable, no matter which characters are used in a given situation. 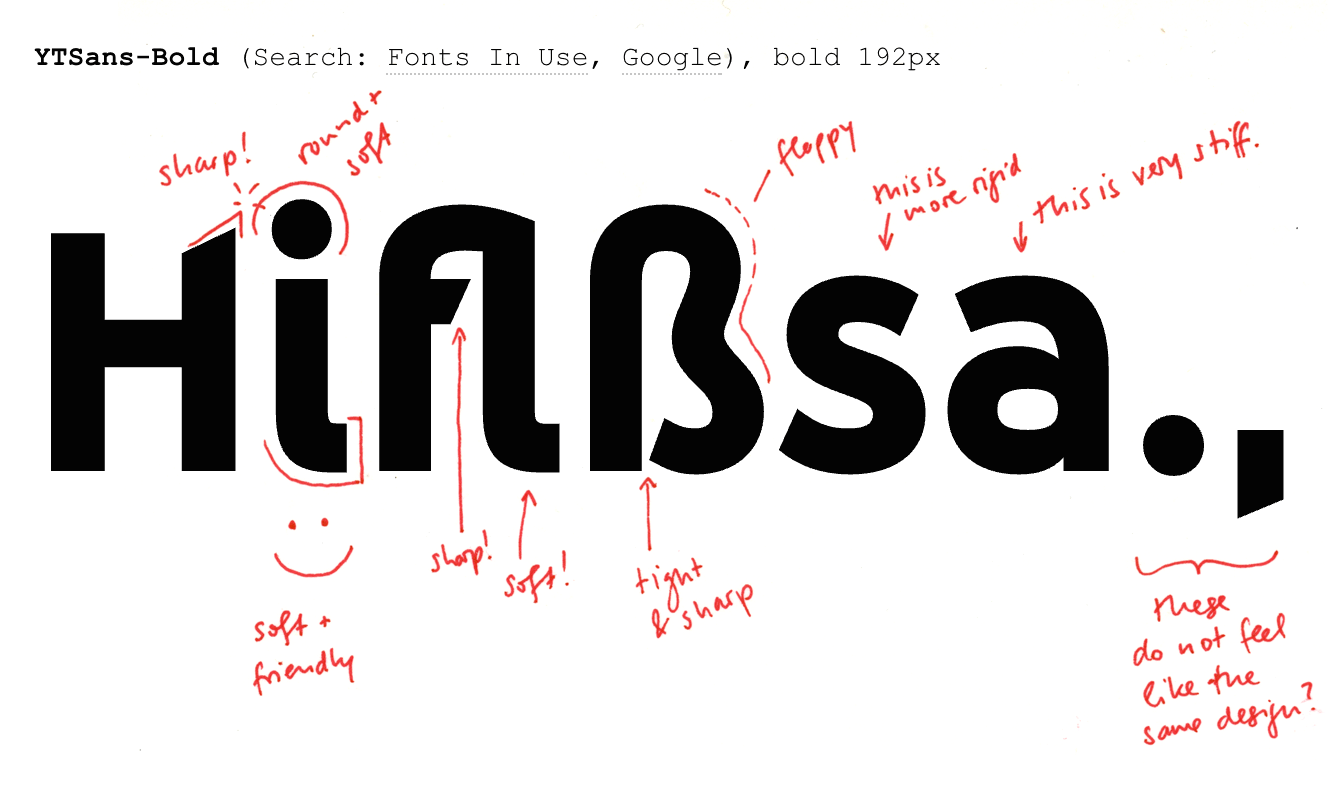 Different moods vie for attention, none of them particularly convincing. The softly rounded feet on i and l contradict the sharpness elsewhere; the overcooked-noodle ß does not get along with the rigid, boxy a; the round dots and extremely rectilinear commas feel like they come from different typefaces.

Saffron writes that the font family “will continue to grow with the speed and excitement of YouTube itself.” So maybe there is hope for YouTube Sans — though I wonder how much sense it makes not to invest in solid quality from the start. Am I too serious about this stuff? I don’t think so. We should take fonts seriously. They have jobs to do. They are tools that enable reading in a particular tone. Aside from providing a platform for visual ideas to play out, this set of requirements places a functional burden on the product.

When fonts work well and their design effectively conveys a brand’s voice, they can be a fantastically powerful tool. They can carry emotion. They can be very specific in how they feel and specific, too, in how they behave, in how they work across media, formats, sizes, and usage scenarios. But making good type is hard and takes time and care, and evaluating and describing it is also hard, and we can’t afford to skip that part.

I’m not sure exactly what to recommend. Maybe we — type designers, clients, creative teams, collaborators from other fields — need to engage in a dialogue about how we can work toward a deeper understanding of type design processes, and how we might foster an environment for type design to come to fruition within larger-scale creative workflows. I hope type designers agree that we should try to help users and clients make informed decisions. And I think it’s equally important to cultivate open and critical dialogue among ourselves. That’s awkward, I know, because most of us are competitors and/or friends. But there’s little to lose, and so much to gain, by helping a beautiful discipline be as powerful as it can be.