When I lived in London (1970-74), I saw an etching by Bracelli that showed angels flying around to create the Alphabet. I wondered if humans could do that; and inasmuch as my studio was right next door to the Covent Garden Dance Centre, I asked some pals there if they’d like to try. “Sure”, they said. 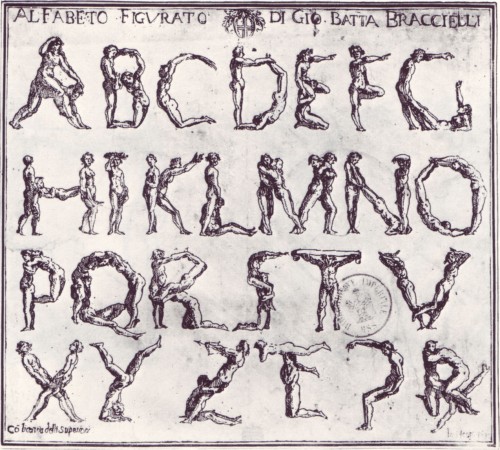 A couple of rehearsals and two days later we had it. No one got paid. It was just a high-spirited valentine for the eye, but when I realized it might be the first photographic freestanding human typeface ever (it was), I tried for a while to make a coffee table-type book out of it. New York publishers were afraid that the pubes and the Z might offend someone. This was in 1975. Japanese publishers couldn’t do it either because of the pubic hair.

Later I had a slide show in a gallery in Alabama in 1979 and no one so much as complained. Teachers even brought their 3rd grade students to see it.

Love Letters was also shown at the Arnol-Fini Gallery in Bristol and at the Photographer’s Gallery in London. Then the chromes sat in a closet for a decade or so. When I learned the rudiments of Photoshop, I did what would have been prohibitive in analog photography days and started making the typeface useable: spelling out greetings, making an eye chart, etc.

I really don’t know why it hasn’t had a more successful life. Yes I do: marketing. Not my strongest point.

The original chromes are 6×7″. It can be made to mammoth scale. I owe an important debt of gratitude to my (then) assistant, Chris Thomson, who designed the lighting and lots more.

Update: Nov 17, 2008 — Big news. Love Letters is now available as a book. You can see higher resolution images of the first few photographs in the book preview below.

Update: Apr 1, 2010 — A few weeks after I published this entry, Rowland sent me a little animated GIF which reveals some of the staging process for the shoot. I neglected to post it. My error is now rectified.