My five-year-old son asked me this question the day Positype released its promotional site for Lust Hedonist. The Lust Series, a self-described “overly indulgent attempt to infuse wanton sensuality in a typeface,” features a variety of formal contrasts: sharp and curvy serifs, thin counters combined with thick bodies. It is the work of Neil Summerour, known for his crowd-pleasing fonts and lettering, and it is striking. The first styles of Lust, released three years ago, were featured in Typographica’s “Favorite Typefaces of 2012”. So what’s not to love?

Consider a few choice lines from the microsites that describe… the type:

“the flowing curves of a woman’s body”

“all wrapped up in the leggy body of a Brazilian supermodel”

“Like a supermodel, it can’t be squeezed into every situation.”

“It looks good dressed down or in a little black dress.”

Is talking about and presenting type in the visual language of seductive advertising sexist? A conversation around this and related questions ensued on Twitter after the most recent iteration of the Lust Hedonist mini-site. Here’s the image that showed up in my Twitter feed:

Although the Lust promotional sites have been in existence for three years, it was this most recent microsite announcement that received a critical response from type designers and typographers on social media. Where was the outrage in 2012? Why was it emerging only now?

And what’s wrong with images of barely clad (mostly) women juxtaposed with sexually charged messages set in a beautiful typeface? Why can’t a typeface be compared to a sexy lady? In a male-dominated industry and community, this kind of language reinforces the under­representation of women’s voices in the field. Yves Peters’s recent article on women in type design (serendipitously published that same day) cites the relative lack of women who speak at conferences and receive industry accolades. Related creative fields have similar problems: a controversial cover illustration for a Newsweek feature article on misogyny in Silicon Valley received a clamorous backlash on social media for essentially reiterating, rather than satirizing, the article’s main point.

By Summerour’s own account, the Lust series promotional sites are intended to be a parody. In order for a parody or spoof to work, though, there must be some distance from the thing it is spoofing. Adbusters is brilliant at this, using the visual language of its subject but subverting the message through wordplay and image alteration. Arguably, the recent critical reaction came about because the Hedonist promotional image is too close to something like a Victoria’s Secret ad to be a parody. (And indeed, a recent Victoria’s Secret catalog features Positype’s Lust Slim, plus a newly redesigned corporate typeface called Victoria One.) It reinforces the message instead of subverting it. 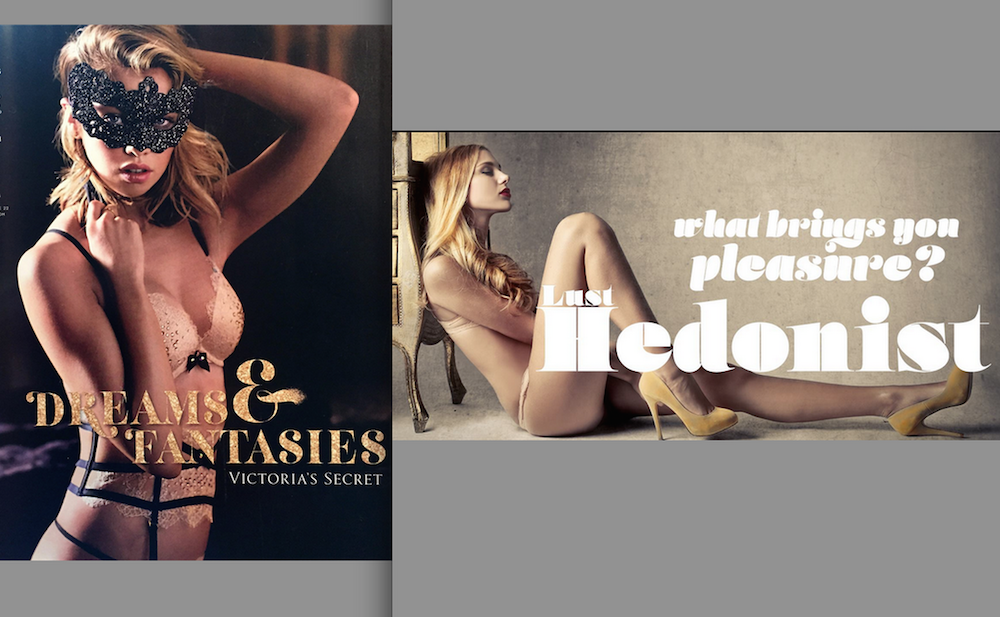 Personally, I thought the cats were better.

Is there a history of sexism in font advertising? For answers, I looked to back issues of U&lc. I thought it might take a few hours to find images of naked women. It took a few minutes. From the second issue (1974):

This was the seventies, people. 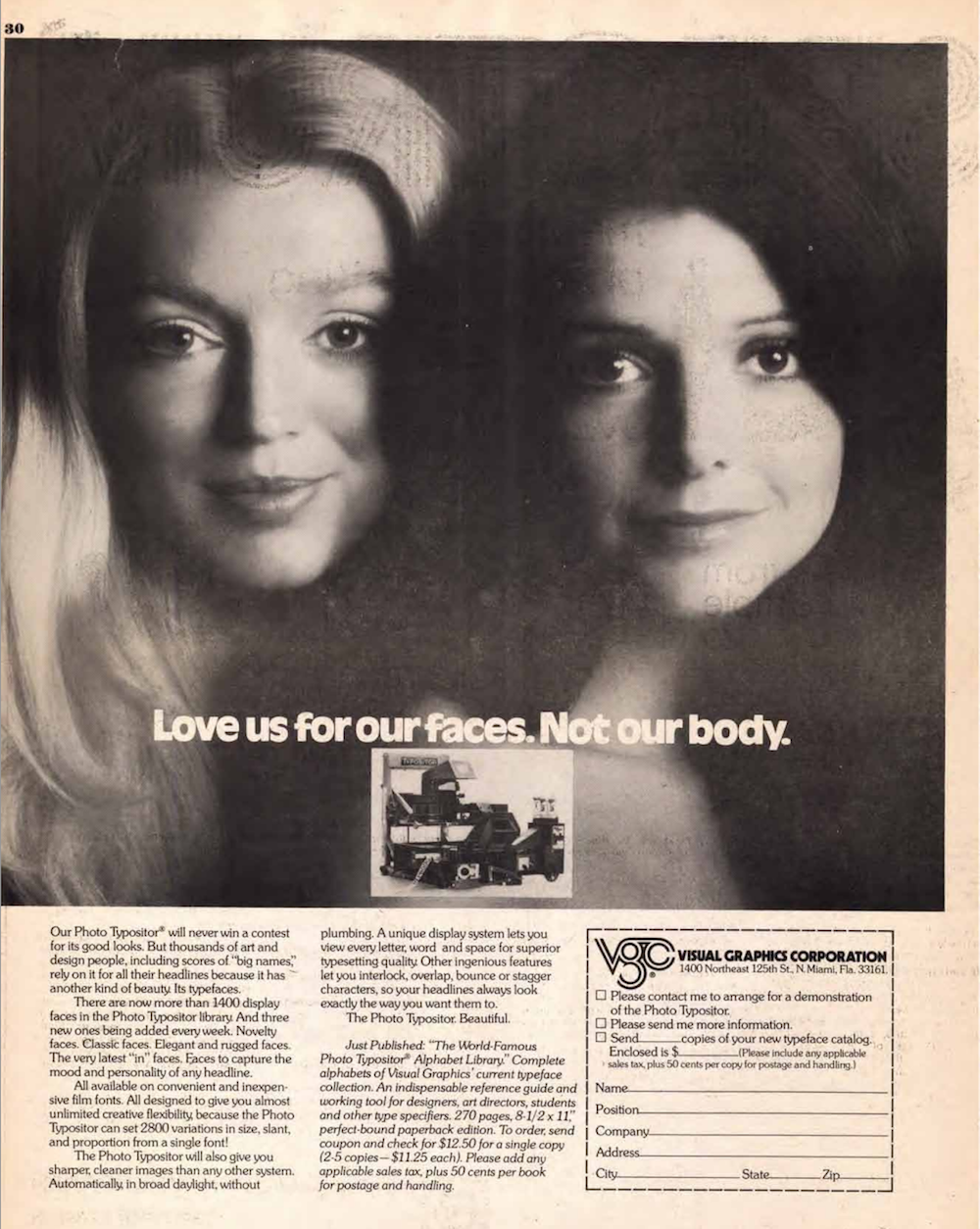 Ad for a Photo Typositor.

And then there’s this gem from the same issue: a full page devoted to Annegret Beier, “the first of a series of articles devoted to the talented women in communications.” 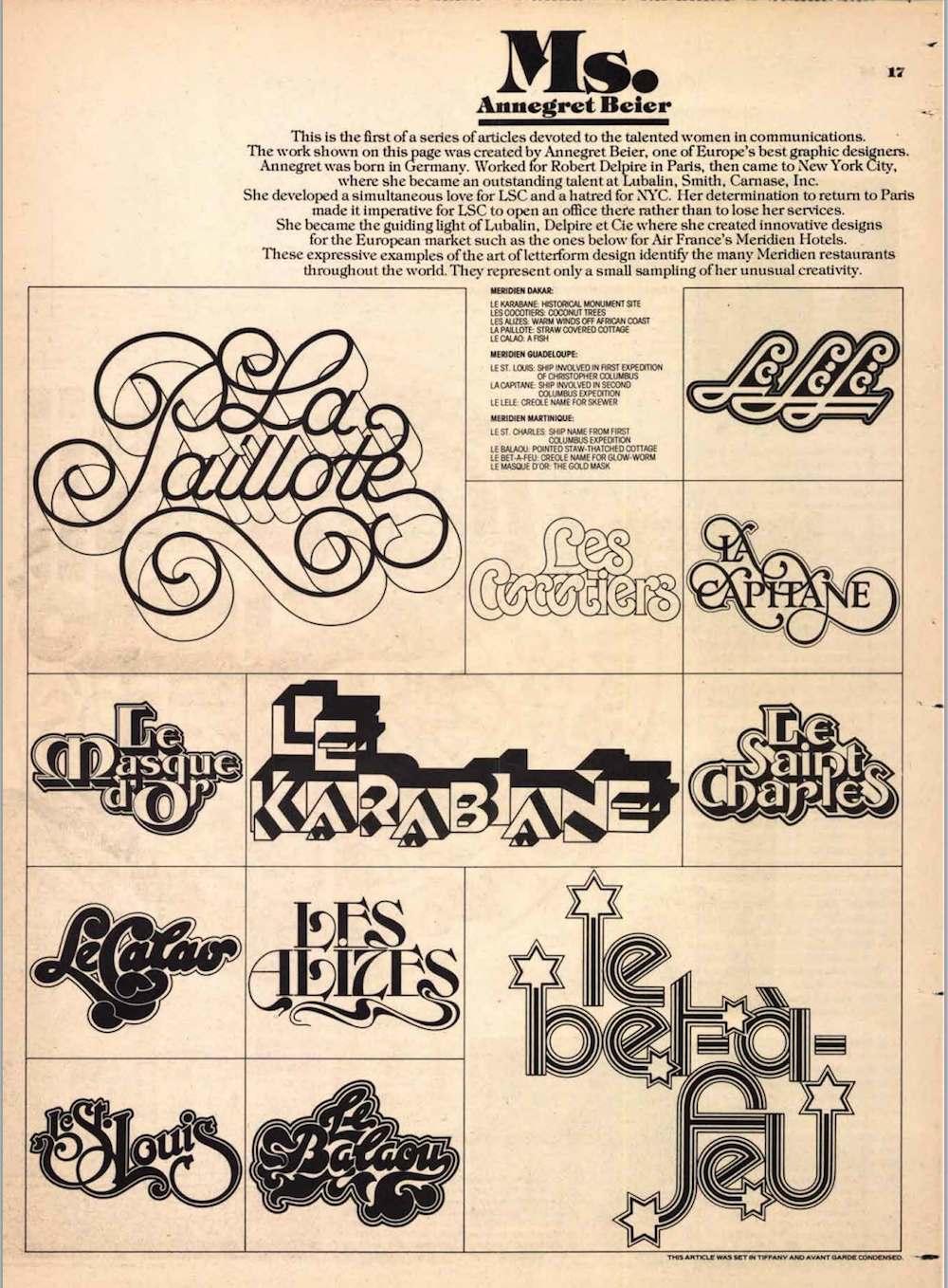 I’m not sure what it means that forty years later, we continue to publish articles devoted to “women in design”. Clearly, we still have work to do.

The worst offender of blatant sexism in recent font promotions is a Tumblr called Fonts & Boobs. The concept is pretty simple. Combine a “high-quality” typeface with a picture of a “cute chick”. Oh yeah, and she’s basically naked and positioned in a variety of provocative poses. All of this is described by the Tumblr’s author as a “useful tool for graphic designers”. Yeah, right.

In the case of Fonts & Boobs, there is no satire, nor any gesture toward satire. And the intended audience is clear from the unapologetic tagline: “You like both fonts & girls?” Here’s the problem, or at least part of the problem: the assumption of a hetereosexual male audience alienates those who don’t fit that description. The Hedonist preview image reiterates this perspective. The question “What brings you pleasure?” is not being asked of the model in the image; it’s being asked of a male viewer. The only time a different audience is addressed is in the site’s warning, which suggests that those without a “sense of humor” should “move on to something else… I wouldn’t want to offend you.”

In the past ten years of my involvement in type, I’ve seen more women enter into the conversation in meaningful ways. Overall, it is an inviting, supportive, and friendly community. But we can do better. Having difficult discussions like this reminds us that we can use language that is inclusive instead of alienating. We can make work that doesn’t reinforce stereotypes and the objectification of women. And, just like my five-year-old is learning, we can choose to find better words.