Sketching Out of My Comfort Zone: A Type Design Experiment

For nearly three months last year, I drew some type every day. My “Daily Typesketch” was an experiment — in drawing, discipline, public practice, and in getting less fearful of process and paper. 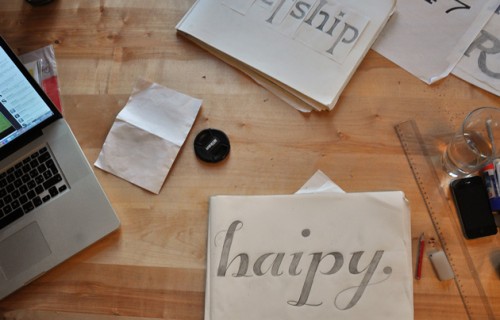 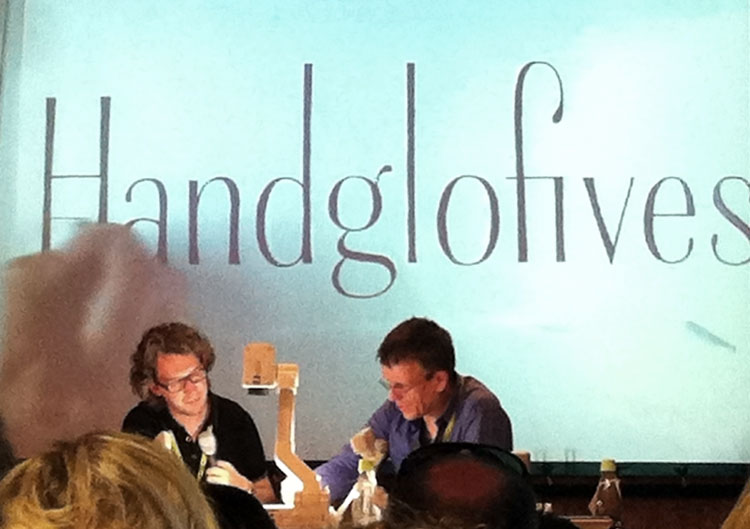 My initial drawing getting grilled at TYPO Berlin 2012. “Very pretty sketch. In class we would ask: Where is the process behind this?” (Photo: Diana Ovezea) 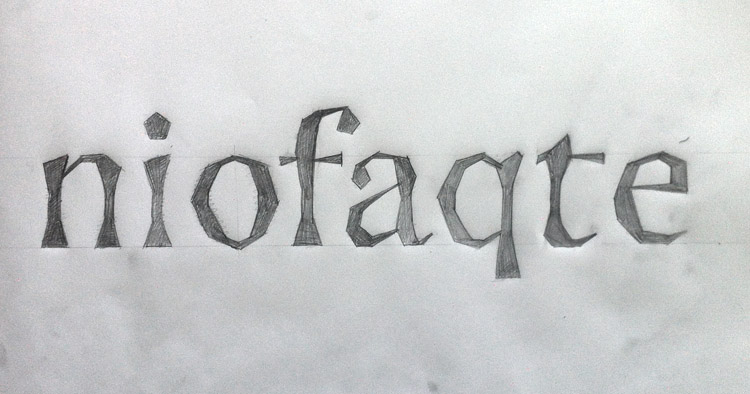 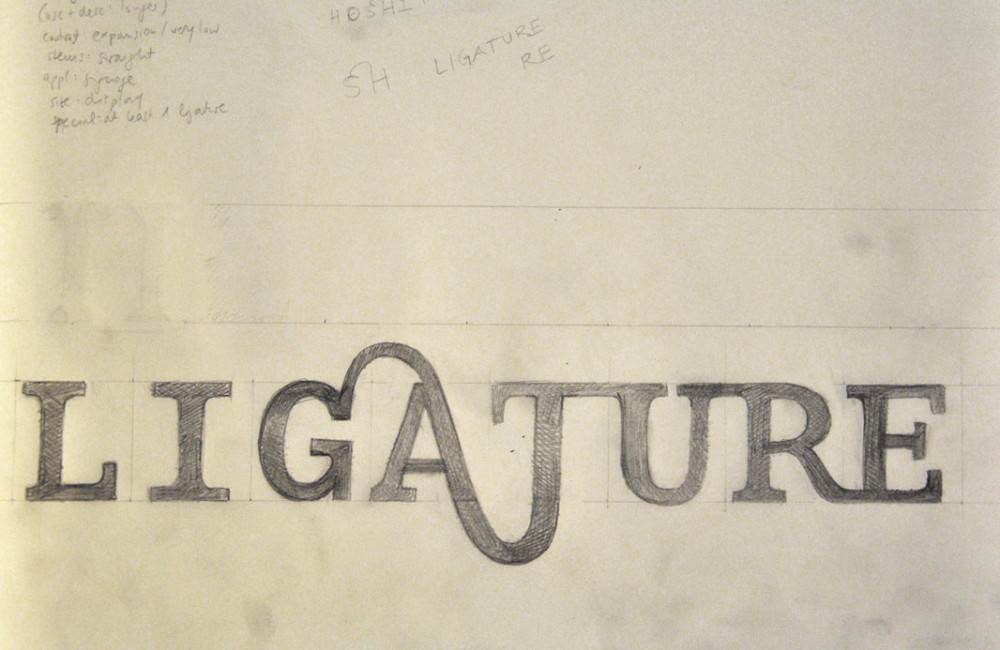 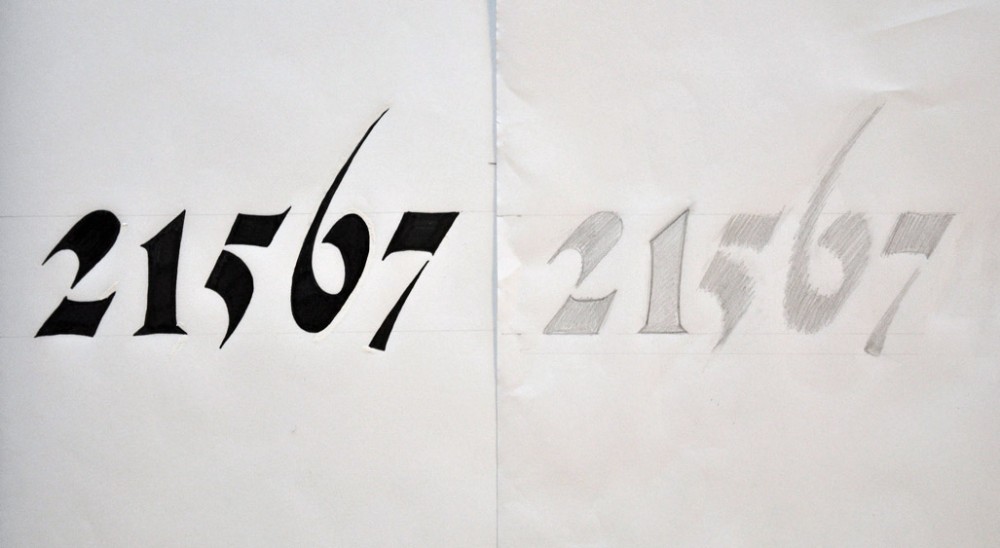 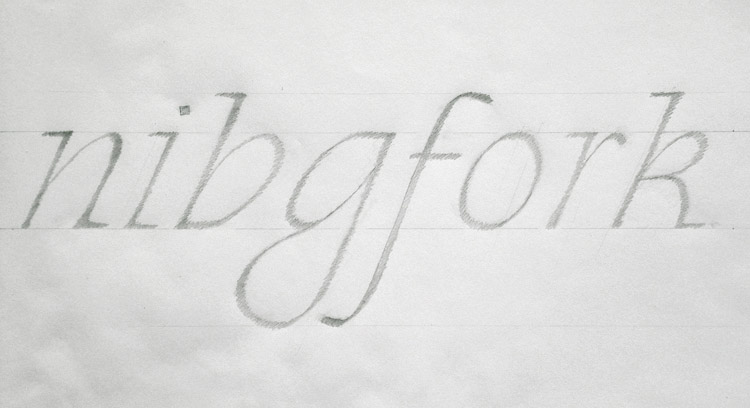 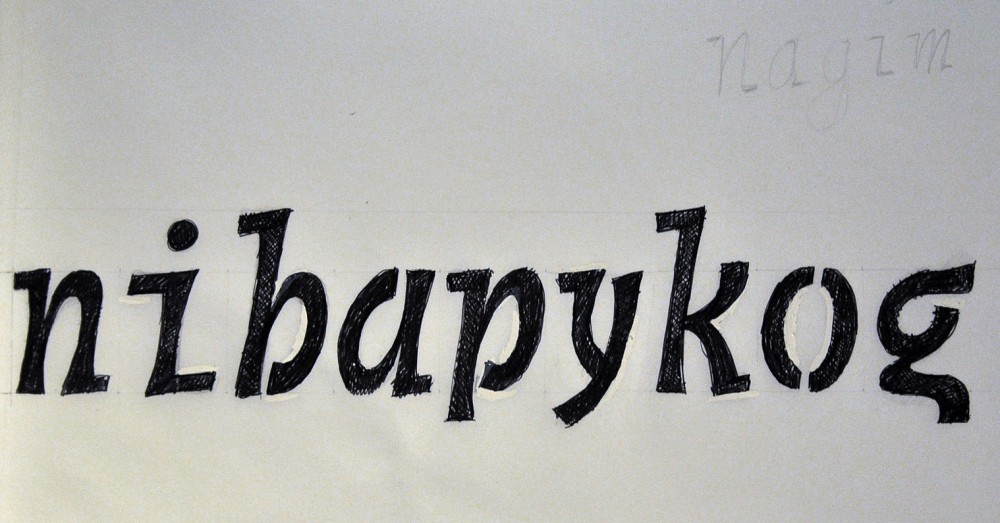 June 18: medium-weight monospaced italic; slab shaped serifs; ascenders shorter, descenders much shorter than normal; no visible contrast (which would be expansion-based); visibly concave stems; multi-purpose, for most sizes; cut as a stencil 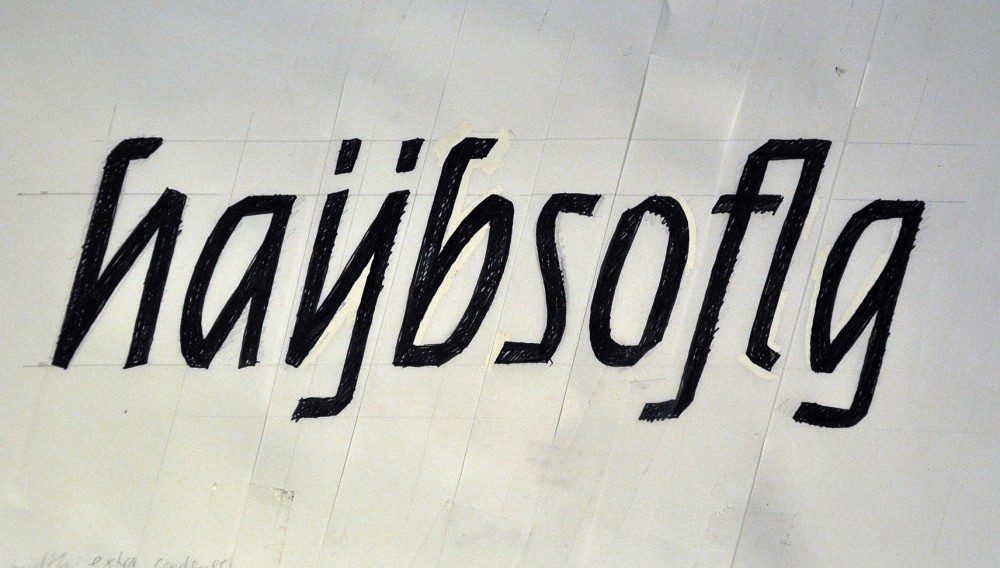 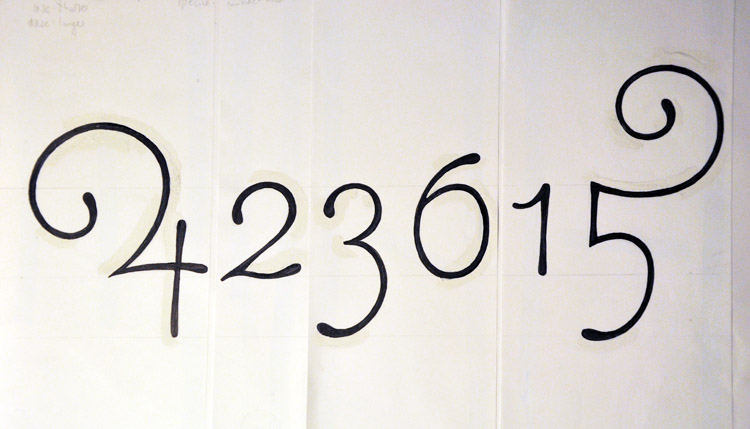 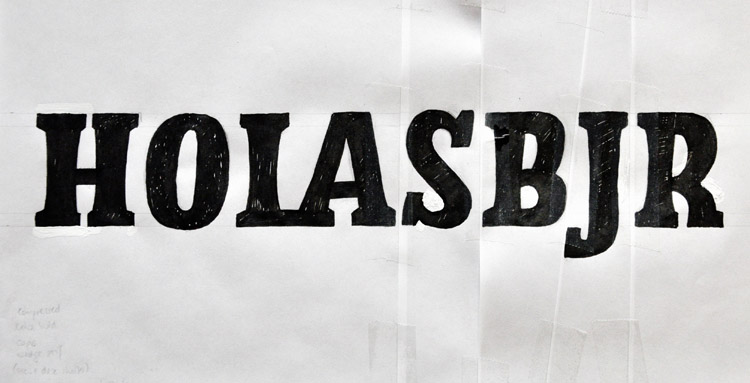 August 2: Helvetica as drawn by Gerard Unger, but as a grunge face and monospaced (!) 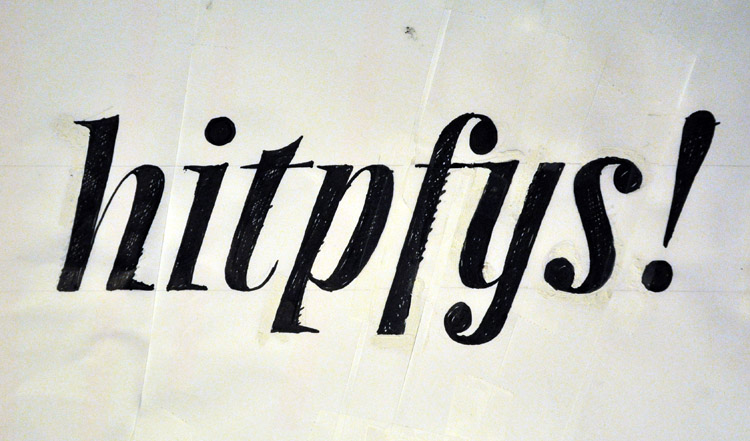 Let me say this first: I know there are many designers who draw more and better than I; who have sketchbooks filled with lovely letters and exciting experiments. My hat is off to them, because I’m not like that. I’ve always thought of myself primarily as a digital designer — computers are my playgrounds, while paper usually instills in me a vague sense of dread (or at least, inconvenience). So it felt like quite an experiment last year when I committed to drawing some type every single day, on paper, and posting a photo of the sketch to a dedicated Flickr set.

I had been getting a bit frustrated in the months after finishing my first typeface, FF Ernestine. Over the course of three years, I had learned to draw type by making that typeface, and now every letter I drew still looked like it wanted to be part of that same family. I longed to diversify, but wasn’t sure how.

At TYPO Berlin a year ago, I participated in Erik van Blokland and Paul van der Laan’s wildly popular TypeCooker critique session. I had known TypeCooker before — Erik’s “tool for generating type-drawing exercises”, which, in a manner of speaking, offers guided walks out of one’s type-drawing comfort zone. Pick a type of exercise and a level of difficulty, and the site generates a random combination of parameters, a “recipe” to follow. My TYPO submission was a narrow, tall, contrasted sans that was reasonably hard to draw, and I sweated over it for the better part of a weekend until I deemed it nice enough to show. “This is a very pretty sketch” was the verdict, “but where is the process?”

That was when I realized I wanted (and needed) to get deeper into practice, into the process. Indeed process, like craft, seems fairly obvious to honor in theory and principle, but harder to embrace in practice. In-progress work is uncomfortable, it shows more open questions than answers; and “uncertainty”, as Paul Soulellis wrote in The Manual, “runs counter to how we’re trained to articulate our design values.

Craft is messy and dirty. Facing this is unsettling for a generation of designers raised with the shiny precision of computers.

We’re taught to express clearly and certainly”, but in-progress work is usually not clear yet, craft is messy and dirty, and sometimes you hit a dead end. Facing this is unsettling — maybe especially so for a generation of designers raised with the shiny precision of computers. We love that precision, even if deep down we know that it’s often a lie. The precise numbers of computers can make our work look like we’ve found answers when really all we have are questions, and the only truth we know is vague.

It is in this crucial point that paper is friendlier to the creative process than the screen: It supports (and renders) vagueness, sketchiness, better than computers do.

Type Cooker creator Erik van Blokland demonstrates the type sketching method passed down from Gerrit Noordzij and taught in the Type and Media program at The Hague.

Embracing the famed “inside out” drawing technique was a key to the whole exercise. The basic idea of starting with fuzzy shapes and gradually “bringing them into focus”, making the shapes cleaner as the ideas get clearer, is tremendously helpful (and can, I think, be applied to all kinds of shapes, beyond the classic application echoing the strokes of broad-nibbed or pointed pens). Thus one gradually progresses from general proportions to details. This is likely the correct hierarchy of decision making — first fixing what is most relevant and visible in type, even at text sizes (proportion, weight, contrast, the rhythm of black and white), before getting hooked on little details.

I am better at details than the “big picture” – better at refining than defining.

This was an exercise in patience, too. I am better at details than the conceptual “big picture”, better at refining than defining, and the computer makes it a little too easy to jump right into the details, with which you fiddle around forever until you realize something big is off anyway. (I’ve lost count of the times I had to redraw all the curves in Ernestine because I decided the x-height wasn’t right yet after all.)

So I started drawing, and I drew every day. Most of the sketches were based on TypeCooker, which made me draw things I wouldn’t usually draw, or even think of as good ideas. It asked for wide seriffed faces and compressed sans serifs, but also such strange things as a monospaced upright italic for TV subtitles, a wide light monoline serif with swashes but no ascenders, or a grunge monospaced Helvetica as drawn by Gerard Unger. (Making sense of these turned out to be interesting.) I drew with an x-height of 4cm on an 11×14 inch pad of transparent marker paper, tracing over the drawings in multiple steps when necessary. Typically I’d do 5–10 letters, a variable basic set that could form the basis for a typeface design (for lowercase this was typically an ‘o’ or maybe ‘e’, at least one arch, something with an ascender, something with a descender, one bowl-and-stick letter, and of course some diagonals and special favorites like ‘a’, ‘s’, or ‘g’). Usually I first made a quick, rough pencil sketch of the approximate structures and proportions, then started working with a pen as soon as I dared, sketching rough proportions and areas before filling in outlines and details. (I never quite lost my urge to add outlines prematurely, but doing this too soon invariably derailed the sketch.)

The best parts of daily sketching: slowly sensing better where black needs to go, and understanding I can build outwards from that fuzzy vision.

The learning curve was noticeable. A good month into the experiment, I tweeted: “Best parts of #dailysketching: Slowly sensing better where black needs to go; & understanding I can build outwards from that fuzzy vision.” It still took courage to lay down ink; applying a dab of slow-drying Tipp-Ex is not the same as hitting Cmd-Z, and having to cut up a drawing to get the spacing right does not feel the same as adjusting sidebearings on screen, where space is elastic and erasure leaves no marks. But my fearfulness of the physical process was evolving into thoughtfulness, my dread into respect.

I learned to think about type in new ways, practiced looking at it differently. I squinted, “unfocused” my eyes, and used a reduction glass. I learned to see the space between the letters as an inherent part of the design. I tried lots of different pens and attempted (mostly in vain) to trim the Tipp-Ex brush just the right way. And I began to feel more free to take on new ideas and try them out on paper without overthinking details right away. Six weeks into the experiment I was “letting loose on … things I’ve exactly never drawn before”, as I wrote happily in the caption to a funky, brushy, reverse-contrast script sort of thing that I wouldn’t have conceived of trying to draw before. I had finally stopped worrying so much, and I was making letters, every day. Letters that didn’t look like Ernestine. Letters that didn’t look like they were finished, or had to be.

The decision to make drawing practice a daily exercise was a trick to make me stick with it. Keeping it up was a challenge sometimes, but it also brought beautiful opportunities, like drawing together with friends I happened to be visiting. In a similar way, publishing the work online was intended to up the pressure and confirm my commitment, but I also hoped it could trigger discourse that might prove helpful to me and maybe also inspiring to others.

Sometimes polish is simply not the point.

Of course, if embracing sketchiness and vagueness on my desk was hard, sharing it publicly was really scary. But I felt I needed to overcome the anxiety of showing something that isn’t as “clean” and “finished” as can be — for sometimes polish is simply not the point. In contrast to other “daily” doses of impressively final-looking work (like Jessica Hische’s famed Daily Drop Cap), sketchiness and roughness are at the heart of my experiment. My sketches are snapshots from a process, stills from a learning curve.

The project ended about as spontaneously as it began. After almost three months of daily drawing, and quite a bit of welcome input and exchange, I went on a vacation with a barely functional internet connection and the desire to disconnect from my routine for a bit. I look back fondly. I’ve learned a lot: much about the myriad shapes that type can take; some sketches have spawned little digital typeface prototypes; and I got out of my deadlock and frustration. While there remains so much that I haven’t yet learned, there is this: It’s true that if you want to draw type, then go draw type. Every day, if you have to. Try doing it loosely, looking beyond your own preferences, and resisting the pressure of polish. You will find new answers — and, what is more, new questions too.