Rob Saunders has spent most of his life in publishing. He founded Picture Book Studio in 1981 which published dozens of award-winning children’s books from authors like Eric Carle and Jane Goodall. He ran Alphabet Press, producing titles by or about graphic artists like Friedrich Neugebauer, Hans Eduard Meier, Lance Hidy, and David Lance Goines. Saunders’ career veered into designing, teaching, and consulting, but he has never diverted from one pursuit: collecting. For over 35 years, Saunders has amassed an astounding assortment of historically significant design books and periodicals, graphic arts ephemera, and specimens of 20th-century metal typefaces. 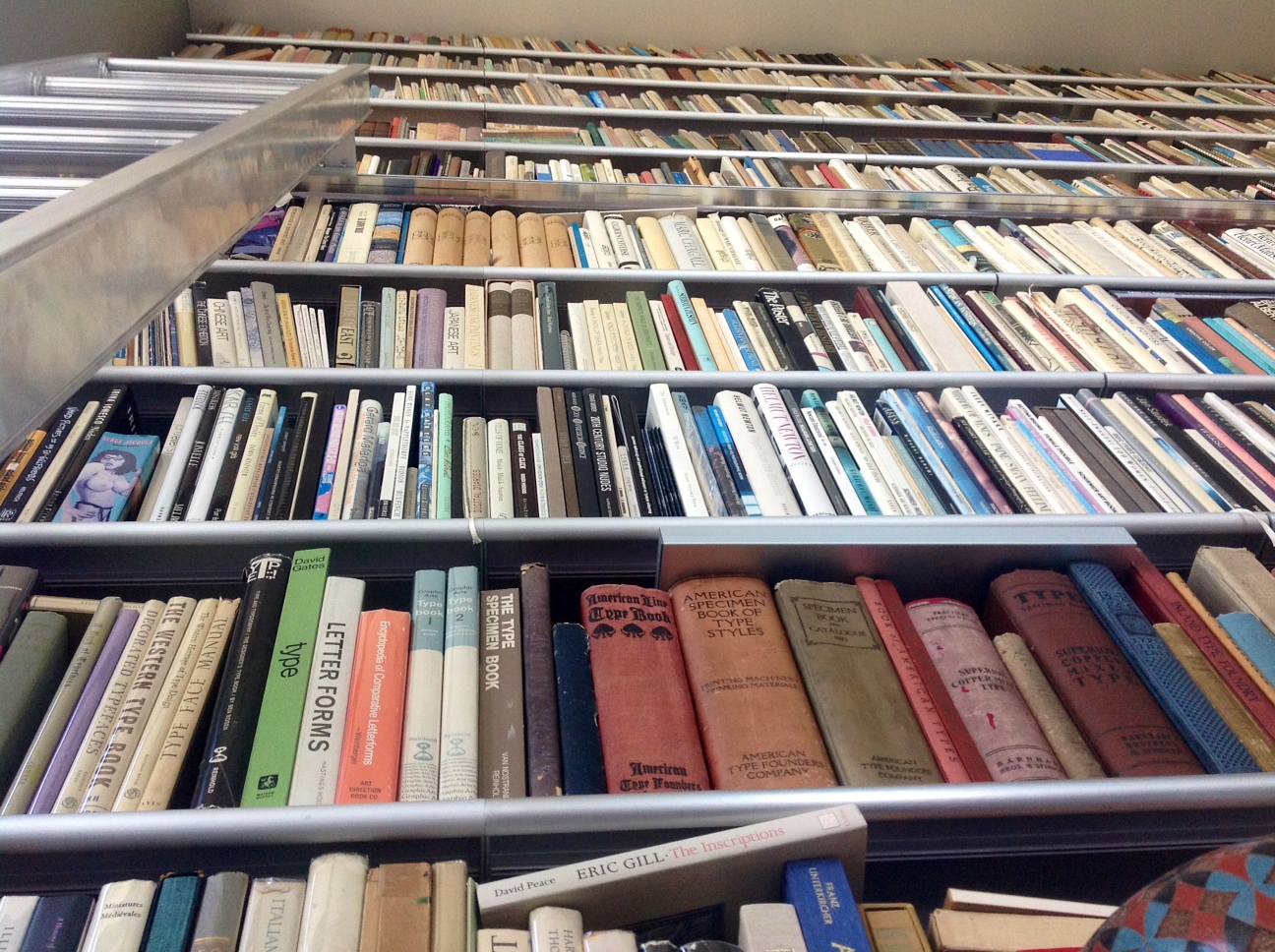 This photo captures just a small portion of Rob Saunders’ book and ephemera collection, which is the basis of the Letterform Archive.

I met Saunders earlier this year through our mutual friend, Tânia Raposo, who was helping to organize the material. I gladly accepted his offer to visit the collection. The breadth and depth of what he had to show was overwhelming. He would ask me what I wanted to see, and for every designer or foundry or typeface I tossed out, he delivered the goods. I returned many times and each visit was a pleasure and education. I always left with only one regret: that the stuff wasn’t accessible to more students, researchers, professional designers, all other lovers of type and lettering.

Saunders feels the same way. While most private collections are limited to their owners and a few friends, Saunders has committed to sharing his collection in ways that even most libraries and museums cannot. It was a few months ago that ideas about digital publication began to form. Saunders explains:

“I was somewhat clueless about what to do with the collection until I began to understand the breadth of the interested constituencies and the weaknesses of traditional institutions in meeting their needs. The other tipping points were two very recent technical developments:

So Saunders recruited the help of digital reproduction expert E.M. Ginger, designer Tânia Raposo, printing enthusiast and bookbinder Nicky Yeager, type designer Sun Helen Isdahl Kalvenes, and book historian Simran Thadani to catalog and produce a digital representation of his collection. The Letterform Archive was born. Its first steps into the public are a web gallery of high resolution captures from the collection and a 2014 calendar that features 12 rare masterworks and 232 birthdays of notable personalities in the letter arts.

A 1964 book cover by Ben Shahn graces the month of October in the 2014 Letterform Archive Calendar.

Start the year off right with A M Cassandre’s 1956 poster for Foire de Paris.

In August, a sample by Paul Renner from the first specimen of Futura.

For the calendar Saunders wanted to accompany the 12 main images with newly released typefaces. He asked Isdahl Kalvenes and me to suggest candidates. I liked his approach of contrasting the historical pieces with contemporary type. It represents a continuum of lettering and typographic design and demonstrates that Letterform Archive is not just about ogling incredible old work, but also supporting new designers. Here’s how Saunders describes the selection criteria:

“The aesthetic goal was to find a good complement to the artwork, not necessarily match it. Rudy first suggested Oakland, the pixelated font featured in his press sheet, but I pushed him to go another way. Obviously we were also looking for recent, excellent, underexposed faces.”

For October, the Letterform Archive Calendar features an uncut press sheet from Emigre magazine by Rudy VanderLans. The month’s accompanying dates and birthdays will be set in Program by VanderLans’ partner, Zuzana Licko.

With a couple exceptions, most of our selections also come from type designers or models that match the nationality of the featured artist. Of course, 12 typefaces are far too few to represent what’s happening in type right now, but I think our picks offer a nice slice of the best in contemporary type design. Here’s what we picked:

Mislab is by French designer Xavier Dupré, one of my favorite type makers, whose work for FontFont, Font Bureau, Emigre, and now Typofonderie represents some of the most characterful text faces of the 2000s. Xavier Dupré typefaces on Typographica.

There are already many reinterpretations of Edward Johnston’s design for the London Underground, but Henrik Kubel’s fresh take for London shows that the model is still worth exploring. Henrik Kubel typefaces on Typographica.

Laura Meseguer is a lettering artist and typeface designer from Barcelona whose 3-font Rumba (a Typographica favorite) explores the idea of typeface variations optimized for a specific range of sizes, but also degrees of expressiveness.

All revivals of metal type are limited to some extent by the quality of the source material, the specific size chosen for digitization, the flawed interpretation of the designer, etc. Linotype’s digital rendition of Dwiggins’ Metro No. 2 is limited even more than most because it only represents a narrow shadow of the original work. It misses the funky glyphs from Metro No. 1. Although I admire Akira Kobayashi’s Metro Office, it’s a completely different design, so for years I’ve been wishing someone would bring back the funky shapes of Metro’s first version. Toshi Omagari did that (and more) with Metro Nova.

It was a little difficult to imagine something contemporary that could accompany Will Bradley’s distinctly turn-of-the-century feel. But Jeremy Mickel’s Shift (a Typographica favorite) felt just right. Not only is it inspired by type of the same era, but Shift shares the warmth, ruggedness, and slightly off-kilter personality of Bradley’s work.

Any “Germanetric Sans” owes something to Futura, so it’s obvious to pair FF Mark with Paul Renner. But this FontFont collaboration reaches back to other German geometric roots including Erbar and Neuzeit Grotesk, exploring territory that is surprisingly uncharted within an increasingly crowded category.

Ben Shahn’s lettering — especially the stuff on the book cover featured in the calendar — is rough and square, with counter shapes that often contradict the outlines. The blatantly obvious typeface pairing would be FF Folk, the 2003 fontification of Shahn’s style, but David Jonathan Ross’ Turnip (a Typographica favorite) is a newer release with much more subtle and interesting similarities.

There is no other new typeface more fitting to accompany Rudy VanderLans’ work than the most recent release of his partner in Emigre (and life), Zuzana Licko. Program has a much more refined finish than the grungy bitmappery of the early Emigre piece shown in the calendar, but the rule-bending is still there: Program “mixes different structures, stem endings, and weight distributions not usually employed in a single family of fonts”.

Filippo Marinetti was an Italian poet and founder of Futurism, a movement that broke free from the conventions of art. Antonio Cavedoni is an Italian designer and founder of the fantastic Enquire, a typeface that breaks free from the conventions of contrast, putting the weight where it isn’t supposed to be. Cavedoni’s as-yet-unpublished typeface was initiated while earning his MA in Typeface Design at the University of Reading. I love it. I’m glad he authorized use of this pre-release version for the calendar.

The other two typefaces can’t be revealed yet, but I’ll add them here as soon as they’re announced.

You can pre-order the 2014 Letterform Archive Calendar by backing the Kickstarter campaign which ends on Monday, November 18. The $10,000 goal is just enough to produce a reasonable run and ship it at break-even cost. Any earnings beyond that will support the programs of Letterform Archive, including sharing more of this rare work with the world.

Also, for a bit of fun during the fundraising period, Saunders is running a trivia game, challenging players to guess the creators of the artwork he posts to Twitter and Facebook. It’s a multiple choice test: all the answers — the personalities whose birthdays are listed in the calendar — are shown on the game board. It’s also a demonstration of the image quality standards set for the digital incarnation of the archive: the zoomed-in and cropped details show paper texture, halftones, ink squeeze, brush strokes, even compass pinholes. These are not your standard scans. These are revealing reproductions that inform and enchant.