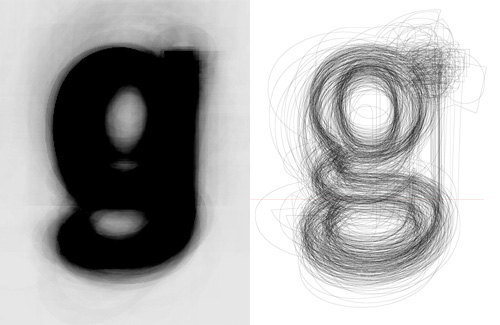 A writer from The Atlantic Wire contacted me to get my opinion on the Average Font that’s making the internet rounds. I don’t think there’s anything worth writing about.

It’s the sort of project that most designers have seen many times before they are even out of school. It would be more interesting if there was a theory or direction behind Moritz Resl’s approach, but his short description shows there wasn’t much thought put into it.

“This project shows what a font would look like if it consisted of all typefaces installed on my system. Every character from a to z is drawn using every single font with a low opacity. In total there are over 900 typefaces in my library. I didn’t exclude the ugly ones.”

Exploring the commonalities and differences between typefaces is intriguing (though others have overlaid fonts to make lovely images that work as art better than Resl’s), but without any controls in the experiment, nor any data about the method or what’s included, the only thing we learn from the result is that there is variety in type, enough to make something mostly but not entirely illegible. And we get a pretty video.

Something like Kai Bernau’s Neutral, a well-researched comparison of typefaces in search of the most “neutral” aspects, has much more value. I guess the images wouldn’t draw the traffic that Average Font draws.

Update: Yet another exploration in typeface merging popped up last week. This time the result, Avería, is a working family of fonts. My reaction is essentially the same as I wrote above. It’s an arguably interesting experiment, but not a very useful one. The designer, Dan Sayers, sums it up himself in the first sentence of his description: “I am not a type designer.” If you need a serif in this vein, there are far more useful typefaces drawn by trained professionals from scratch — Tribute, Fabiol, FF Avance, Garaline, Galena, to name a few. Or, to put it in a more festive way:

“I toast that creation with a glass of my famous 725-wine punch.” — Jonathan Hoefler.

Above: Average Font by Moritz Resl and Face Variations by W. Bradford Paley

This post is sponsored by brochure printing and postcard printing.