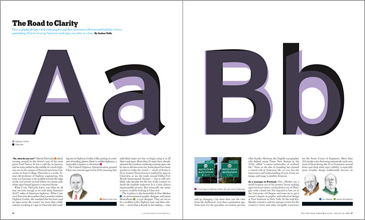 Typography is enjoying an unusually active year in the mainstream press. Helvetica’s 50th anniversary and documentary is getting reams of coverage outside the standard design media. The film will even show to general audiences in New York and San Francisco.

Now Clearview, the new typeface for U.S. Highways, is getting public exposure after an excellent article by Joshua Jaffa in New York Times Magazine. Those that missed the print version, can see the layout, courtesy of Khoi Vinh, art director for NYTimes.com.

Not since the scandal surrounding Bush’s National Guard service, has so much information about type permeated the public sphere. As Rick Poynor so eloquently states in “Helvetica”, thanks to the digital age and accessibility of tools for visual communication, people today are vastly more aware of design in general than at any other time in history.

Some type freaks might fear that they’re losing the geek cred that comes from claiming expertise in an esoteric subject. (I loved that band before they got famous!) Fear not: typography is still way geeky. This trend can only be a good thing for the craft.