The Webfont Revolution Is Over, Let the Evolution Begin

It feels like this war has been raging for ages, but we’re still in the very early years of type on the web. When we look back on this moment — from the day the first webfont service launched to the imminent standardization of WOFF as a webfont file format — it will be but an em dash in the long history of screen typography. 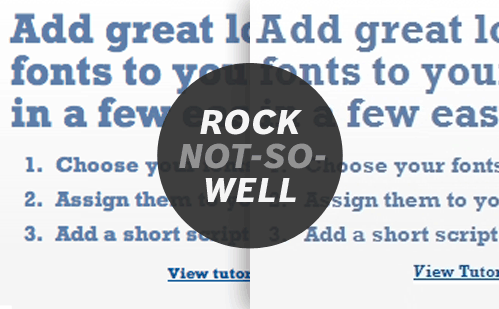 Like Simon Daniels said so prophetically over a year ago, the war (over formats and security and delivery) is over. It’s time to win the peace. Now we’ve got to build some fonts.

Building the fonts is the part of this story that so few anticipated or dared to face. It’s the hard part. So hard, in fact, that some font manufacturers skipped the process altogether, simply releasing their print-optimized fonts as “webfonts” without the significant changes required to make them read well on screen. To me, this is akin to shipping software that is bug-ridden at best. Still, the tech media touts the “thousands” of new fonts now available for web use. Most of what consumers read is about how many fonts you can get and how they are served, but not so much about how they look and read.

Now that the painful reality of poorly hinted fonts is sinking in, web designers are realizing that there is little value in choice alone. In fact, having the choice between thousands of fonts that work only at certain sizes on certain screens isn’t much of a choice at all.

Things will get better. Display pixel density will improve. Windows users will upgrade, replacing GDI with DirectWrite. But this evolution will be slow, and we can’t do much to speed it up.

What we can do is push the evolution of font makers and services. Next time you’re shopping for type, don’t just look for your favorite face as a webfont. Ask for more:

1. Demand fonts that render well for the bulk of all web users, not just those on Mac OS X or Windows 7, but also the poor saps on Windows XP who still represent more than half of the browsing population. High quality releases like Web FontFonts, Fedra Sans Screen, and FacitWeb demonstrate that this can be done.

2. Demand comprehensive previews that show fonts in multiple sizes in all the most common rendering environments: Core Text (OS X), DirectWrite, GDI ClearType, and GDI Standard. Typekit and MyFonts have made valiant efforts here, but the experiences fall a bit short.

3. Demand transparency from webfont providers about the limits of their products. Fonts should be clearly marked when they don’t perform well at certain sizes or in certain operating systems. Webtype and Typekit lead buyers to fonts that work especially well for text. It’s a good first step. FontsLive offers a “minimium recommended size” which would be laudable if it wasn’t so suspect (you can’t even sample their fonts below 20px).

Choosing typefaces for print is fairly clear: you see what you’ll get. Webfont quality, on the other hand, is hidden behind a veil of browsers, operating systems, and end user settings. Yes, there are good webfonts out there, but finding and testing them is a struggle. Font buyers rely on providers more than ever before. Those who provide quality and transparency will lead this new market and medium.

Update: David Březina points out that IE7 switches ClearType on by default. So while there are many Windows XP users out there, most of them have upgraded to IE7 and aren’t seeing non-ClearType rendering in their browser. In this case, ClearType in Win XP would then be the harshest common render mode to test against.

Update, Oct 19, 2011: Since this article was published MyFonts and Fonts.com Web Fonts have joined Typekit in providing screenshots to reveal how their fonts perform in various browser, OS, and (in the case of Fonts.com) render engine environments. I commend these retailers for their transparency.

Update, May 16, 2013: Without explanation, MyFonts has removed their webfont previews. Boooo.