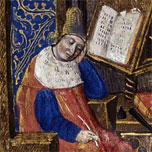 Nowadays, we tend to take for granted the mass production of books, but there was a time when these objects were a rare and expensive commodity — copied by hand, one at a time. Two current (and free!) New York exhibitions offer up marvels from both ends of that temporal divide for the book-loving typophile and the type-loving bibliophile alike.

The Humanities and Social Sciences Library of the New York Public Library, located in midtown Manhattan, is displaying 100 medieval and Renaissance illuminated manuscripts in an exhibit called The Splendor of the Word. This is the first time the Library is showing volumes from its collection of nearly 300 illuminated manuscripts. The books on display include Bibles, gospel books, books of private devotion, scientific texts, ancient histories, and literary works. The dates range from the turn of the 10th century (one or two of the manuscripts are, yes, nearly 1,000 years old) to the 15th century. While the curators’ focus is on the work of the artists who illuminated these early books, the exhibition is also a wonderful chance to get a close look at the painstaking lettering work of scribes and rubricators. (One of the first items in the exhibition is a smallish book with lettering so tiny that a man standing next to me exclaimed, in disbelief, “Is this written by hand?”) The exhibition runs through February 12, 2006, and is complemented by two short films — one informative (“Making Manuscripts”), the other slightly amusing (“A World Inscribed: The Illuminated Manuscript”). In addition, the Library has placed selected folios from two of its manuscripts online: “The Tickhill Psalter” and Boccaccio’s “Of Famous Women”.

Meanwhile, in the East Village, the Cooper Union is displaying the work of designer Chip Kidd, which spans the years 1986 through 2006 (so far). Even if you already own a copy of “Chip Kidd: Book One”, you might want to see this exhibition: much of the material on display had to be left out of the book, or was only shown in part: school work, pages from early portfolios, comps, original artwork (by the likes of Chris Ware and Geoff Spear, among others), and mechanicals. All of these are best appreciated in three dimensions. Many of Mr. Kidd’s jackets also benefit from being seen this way: some are designed to interact with the cover, others are planned with all six sides of the book in mind. Still others might include devices such as folds or die-cuts that help to tell something about the book’s content. The exhibition runs through February 4, 2006. Chip Kidd himself is scheduled to speak on January 26.

Ricardo Cordoba is a graphic designer based in New York City. His interests include book covers and typeface design. He contributed to Quipsologies from 2010 through 2017. During 2017, he worked as a freelance copyeditor and fact checker for AIGAãs Eye on Design. He is a frequent contributor to Typographica.