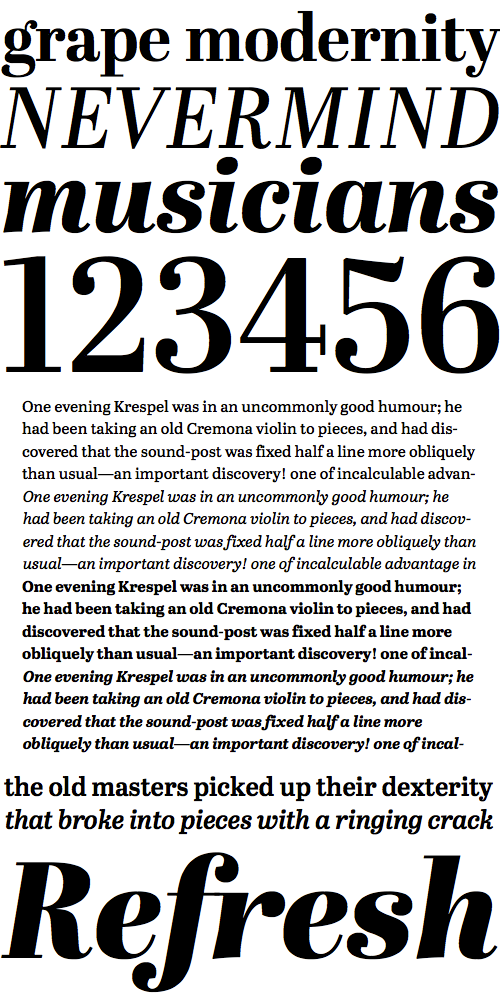 Abril is the web’s kind of typeface. This family encapsulates current trends and is an amalgam of traits from past periods. It brings Didone romanticism to a sea of very similar screen-safe sans serifs, and offers a lean, useful alternative to designers tired of (but spoiled by) Georgia, the preeminent screen Scotch.

The contemporary design aesthetic is full of objects with mass and humanism. Apple hardware and Audi cars, with their rounded corners, apparent density, and (visually or physically) low centers of gravity, are good examples. Abril’s “Display” styles exude a similar density (for instance, their chiseled, leaden ball terminals) and subtle humanism (the tapered stems and flexed stroke endings in the italics), while maintaining the formality of a Didone. Thin strokes, critical to the personality of a Didone, are sturdy enough to ensure the face survives on screen, yet they do not compromise its spirit – the thinnest among Abril Display’s four available weights still has plenty of contrast.

Abril’s “Text” styles draw more inspiration from Scotch Roman types than Didones. Nevertheless, there is no shortage of mass and humanism in Abril Text, and plenty of family resemblance – same chiseled ball terminals, flexed stroke endings, and stroke axis as the Display styles, but with beefy, bracketed serifs, and a toned down contrast. There are also a variety of features that make the type more readable, like a stronger sense of continuous rhythm in letterforms and spacing, as well as subdued idiosyncrasies (the lowercase ‘g’, for example).

The fact that Abril comes in separate Text and Display styles is itself a mark of distinction. Desktop publishing seems to have given us the idea that one size fits all when it comes to digital type, but that’s certainly not true. Abril is also a study in how to successfully release a font across distribution channels and media. It was simultaneously made available on TypeTogether’s own site and via web font partnerships with Typekit and Fontdeck, and its basic styles had been manually TrueType hinted prior to release. Plus, Abril’s Fatface was made freely available as an introduction to the family.

I hope Abril’s culturally relevant style and astute release strategy earn it the success it deserves. I, for one, will be using it.