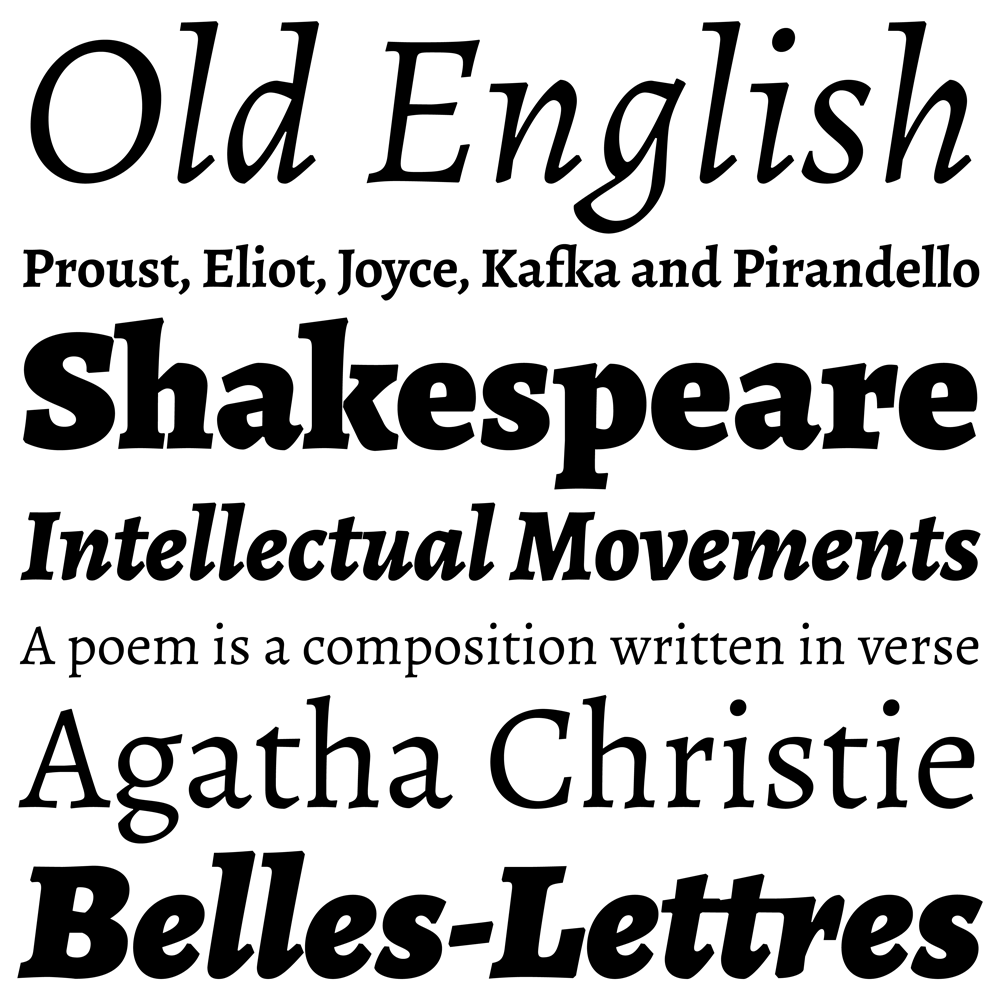 A year that saw great experimentation and invention in typeface design, 2012 also brought us a plethora of grotesques and ornate scripts. While superficially a conventional book type, Juan Pablo del Peral’s Alegreya ht took a path less trodden. Alegreya successfully balances some risky stylistic choices with solid technique, resulting in a delightful mixture of the classic and the playful.

At large and at small sizes, Alegreya manages to convey both a stateliness and a whimsy. The design performs well, not only in its intended setting — printed book text — but also as a webfont on lifestyle websites, for example, and as a display font across all media. In the way that early letterpress printers needed only a few typefaces to perform many tasks, Alegreya seems capable of playing multiple roles with equal grace and style. Serif typefaces rarely achieve this flexibility, since the contrast and expressiveness of a serif typeface look so different at varying sizes.

Alegreya is a space-efficient design, a trait almost unnoticeable behind its expansive and clear appearance. Loose and even spacing and short serifs open up the reading texture. Serifs are long where they should be — as on ‘C’, ‘T’, and ‘r’ — but are otherwise kept in check. Certain strokes end without serifs, imparting a contemporary flavor. The tops of the letterforms are emphasized by the tapered stems. The lightened stems not only allow air into counters, but facilitate an unexpected horizontal emphasis, counteracting the narrow letter shapes.

In the italics, the tops of the lowercase are also emphasized by horizontal serifs. This prevents these styles, with their sharply-turned bottom outstrokes, from becoming too grassy in texture. As with other Renaissance faces, the structure of the italics provides a clear differentiation without unnecessary compactness. Attention is focused on both economy and clarity.

Asymmetric tilted serifs, richly varied color, exuberant details like curved tails on ‘u’ and ‘d’, and the sharp joints in the italics have the potential to become distracting. But each of these is carefully modulated and mixed into the overall texture. Like strong ingredients in a recipe, these elements marry in a subtle blend of the vivacious and the serene. That this balance is apparent in display sizes as well as text is an unexpected feat.

The weight range of Alegreya seems wisely selected. The low stroke contrast throughout allows all weights of the range to function comfortably in text, with enough contrast between weights to allow for emphasis. None of the weights lack substance or texture, however: lighter weights serve well in display, set in caps, small caps, or mixed case. The heaviest weights, as might be expected in a serif design, become slightly boisterous, which may be an asset in packaging and headlines. Still, the heavier weights maintain athletic, narrow widths without becoming dull or muddy. Serif and stem weights are well balanced to avoid clotting.

Any of these details would be welcome in new offerings. Del Peral has managed to combine exuberant and contemporary shapes and treatment with the DNA of classic book types, while improving the size range at which these ten fonts may be confidently used. Economy, style, strength, clarity, comfort, freshness, and stateliness are rarely combined in such a deceptively simple package.

Carl Crossgrove is a typeface designer with Monotype. His background in book arts, drawing, calligraphy and other hand work informs his type designs with humanism and craft. His typefaces include Biome, Beorcana, and Mundo Sans.