Amster wasn’t selected for any other “best of” lists in 2014. The work of PampaType — the Argentinian foundry spearheaded by Alejandro Lo Celso — often seems to fly under the radar, a testament certainly not attributed to lack of quality. On the contrary, Lo Celso has curated a string of unique, quality releases (most of them from his own hand), including a text family named after the author Jorge Luis Borges; the Excoffon-inspired Quimera; and the cheeky rounded grotesque Perec.

An inexhaustable supply of flamboyance, Amster is the work of Francisco Gálvez. He has drawn a few typefaces prior to this, none of which is as interesting as Amster. Initially released in 2008, it was revamped and expanded for PampaType in 2014. The new Amster includes five weights and two sets of illuminated capitals. It has spiky triangular serifs and, in the same vein, thin joins that all but evaporate, only to be reconnected in print as ink is sucked into the paper and spread out. This leaves a sparkling, sharp texture that makes Amster relevant at more than one size.

To many outsiders, Latin American type has a very distinctive flavor. Amster, like other PampaTypes, is expressive, sometimes verging on absurd — much more so than I am used to seeing in text types, and frankly much more than I am comfortable with. Accents flow across the paper like a lazy river — the breve sits atop its body like an astronaut’s helmet, the acute drifts like smoke from a chimney. Shapes are a peculiar mix of sharp and curvy, turning this way, then that, adjusting for context or, it seems, perhaps just for the fun of it. The flag of the ‘g’ curls into a downstroke to form a ‘gy’ ligature, and an alternate variant makes way for accents with a complete change of structure — even currency symbols are dressed to the nines. Faced with some of the craziest solutions, I cannot help but smile. The tabular permille sign is one such creature. Gálvez must have had all the time in the world with this.

Amster is filled to the brim with multiple superscript alphabets, swash variants, discretionary ligatures, contextual alternates, and floral patterns, including the two rich initial cuts, the Versal Illuminada, with multiple variants for each letter. The Versal Illuminada draws inspiration from engravings by the celebrated Chilean artist and designer Mauricio Amster Cats, whose work appears in a series of popular poetry publications called lira popular (literally: popular lyre) or “string literature”. Amster Cats also lends his name to this family.

Amster is expressive, fast-talking, and colorful. It’s almost as if it can’t speak without gesticulating. For many of the same reasons I love it, I also suspect I wouldn’t be able to use it in my own work. I’m too much of a conservative. But that’s no excuse not to give Amster the attention it deserves. 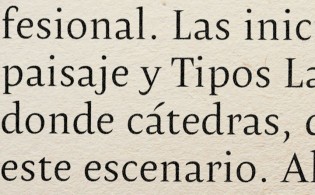 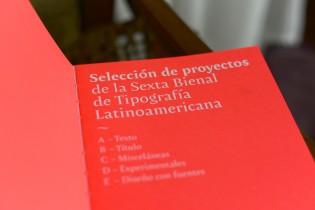 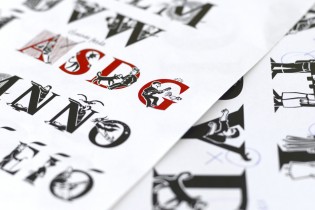