But! Lots of us turn our noses up at Brush Script. We sneer, “That typeface looks … amateurish.” And we dismiss it with a curt, “It’s so … overused.” The thing is, we have to separate the typeface itself from the things that have been done to and with it. For decades, Brush Script has been mistreated by font bundling marketers who lumped it in with 9,998 other fonts and sold it for fractions of a cent. That is what has led to it being overused. That overuse is what has given typo-intellectuals1 an aversion to it. None of that has anything to do with the design of Brush (as it was originally named).

The reality is that Brush is a marvel. Scripts are tough to get right even with all of the contextual substitutions, elastic spacing and sophisticated drawing tools that we have to throw at them today. A fluid, brushy, animated script cast in little metal blocks in 1942? My goodness, that sounds impossible. Yet, Brush totally works and is completely beautiful. Robert E. Smith was a magician.

ATF Brush is a loving revival of everything that is great about the original. It has those graceful curves, the playful bounce, and the gutsy capitals that we all cherish in the most private parts of our hearts. ATF Brush brings lots of new stuff as well. It has a range of weights from the surprisingly spry Light to the pull-no-punches Black. It has some clever alternates and ligatures delivered automatically via OpenType substitutions. It supports a bunch of languages and has the latest and greatest monetary symbols. It’s also drawn really well (that can’t be said of that “Brush Script” that already shows up in your font menu). ATF Brush is Brush Script, but better and new.

It’s time to show how we really feel about Brush and start using it with care and respect. Don’t just trot it out when you want something to feel nostalgic. Use it because it still feels fresh. Don’t hide behind irony when you use it. Use it because it looks great. Use ATF Brush because it’s all of that and so much more.

Tal Leming, formerly a designer at House Industries, established Type Supply in 2005 where he makes fonts and lettering for clients like Sundance, WIRED, and US Soccer. 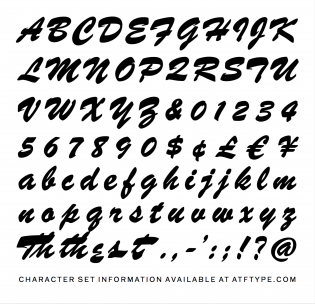 An abbreviated glyph set of ATF Brush Light, a new weight not available in the original metal type.

An abbreviated glyph set of ATF Brush Light, a new weight not available in the original metal type.