I’m in love with this ‘n’! Pause for a moment and dwell on its beauty. It was made by Sibylle Hagmann, best known for the superfamilies Cholla and Odile/Elido. This ‘n’ is from Hagmann’s most recent typeface, Axia, published on her own Kontour label late in December (and nearly overlooked during the end-of-year bustle). Missing this typeface would have been a shame, for Axia is more than just another square sans.

One central aspect of typeface design is how shoulders are treated. Do curves flow smoothly into stems, or do they meet at an angle? According to Tim Ahrens, this question is almost as defining as the presence of serifs. In order to prevent dark spots, arches are usually tapered. Gerard Unger has made acutely attenuated shoulders his trademark. Hans Reichel’s famous “spurless” designs are another extreme solution to the same challenge.

In designing Axia, Hagmann took a different approach, one that is refreshingly reckless: when a curve reaches its zenith, it kinks sharply and shears toward the stem. This treatment is applied to all letters where rounds and verticals join. It is particularly interesting to see how ‘b’/‘d’ and ‘p’/‘q’ are handled: the “sloped eyebrows” lend the face a stern look. Angular rigor shines through in other details, too. While I like the ‘B’, I find the chamfered top of the ‘t’ and the double-bent ‘J’ a little mannered.

When looking at many releases, I have no idea how the fonts might possibly be used. Not so with Axia, which has a pronounced modernist architectural feel. It’s easy to imagine this typeface applied in the arts, industrial design, and related fields. No wonder — Axia started out as a custom design for the Rice School of Architecture in Houston, Texas. Its shapes are robust enough to be placed on top of photographs, be it for posters or covers. At the same time, they are sufficiently sapid to be looked at — especially in the two fancy stencil cuts — e.g., in exhibition signage.

Axia is constructed and technoid, but not in a naïve or reduced way. Although obviously not made for immersive reading, Axia can also be used for text sizes. Ascenders project above cap height; the ‘g’ is double storied; oldstyle figures are the default. Axia is a text face with character — suitable not for novels, but for catalogs or brochures. As an extraordinary feature, all its styles share the same metrics. The italics are neither too compact nor too inclined. This renders the family ideal for multilingual publications: columns in different languages could be distinguished by using different styles, which will always take up an equal amount of space.

Axia’s uncompromising design execution, with its squarish and rather open forms, leads to some obtrusive glyphs like the oldstyle ‘3’ and ‘9’ with their heavy bottoms. The ‘ß’ (eszett) is too dogmatic for my taste. The designer insisted on accentuating the derivation from ‘ſ’ (long s) plus ‘s’, thereby accepting the resulting wide and complex glyph. At 660 glyphs per weight, Axia covers a considerable range of languages, but some of Axia’s diacritics appear off-center. Another bone of contention is the unorthodox placement of bridges in Axia Stencil.

Don’t let these small criticisms overshadow Axia’s many good aspects. This is a well-produced and full-featured family, including small caps for all styles (except the stencils); case-sensitive alternates; and a complete set of figures, including small cap figures. Incidentally, Hagmann solved the quote mark dilemma. Americans sometimes want their quotation marks top heavy, while Europeans prefer a consistent angle (see this discussion). Axia includes the mirrored American flavor as a stylistic alternate.

You can have a closer look at Axia and its features on the new Kontour website, which launched simultaneously with this remarkable typeface.

Do curves flow smoothly into stems, or do they meet at an angle? According to Tim Ahrens, this question is almost as defining as the presence of serifs. For Axia, Sibylle Hagmann found a new approach.

Poster by Carolyn Moore for the Rice University School of Architecture 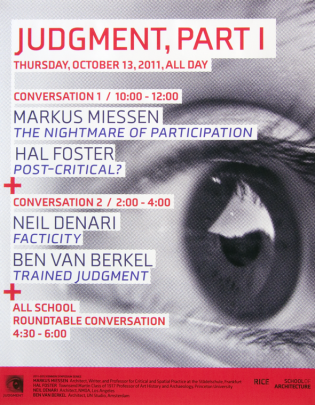 Poster by Carolyn Moore for the Rice University School of Architecture