The pleasure of reviewing a typeface is inversely proportional to the ease with which it reveals the challenges faced by its designer, and what may be unique about it. In other words, just as the design of a good typeface requires effort in details of marginal detection, so a rewarding review demands insights beyond what’s immed­iately facing you. Brasílica is exactly that kind of typeface: relatively easy to overlook in an array of new releases, but revealing the more one lingers.

For starters, there’s not much of it. Five weights for the uprights, with neither a Light nor a Black worthy of the name: a typeface for paragraphs, and subheadings, and maybe smaller sizes, but not titling or display use. And just one Italic — not even the Medium has one, which invalidates the notion that the Regular and Medium are interchangeable. This is typography for an editorial voice that is pared back to the bone, with emph­asis to be used only when your vocabulary fails you.

The letterforms are quite wide, against the trend of the last few years that tries to squeeze words on narrower line lengths — the sturdy terminals and cut-away joints suggest that a smaller type size may just do the trick. But there’s another trend that Brasílica follows very clearly: that of the gradual abandonment of rigid vertical stems for upright styles. The swelling strokes evoke Proforma, except that the effect is applied not for functional reasons, but as an ironic, self-conscious anachronism.

In its currently published version, the typeface does not include the full character set that its name sug­gests. When the update becomes available, it will be a useful reminder that character-set considerations can be nuanced and meaningful for underserved commun­ities — a stark contrast to the too-common cases of mildly embarrassing typefaces that run before they can walk. On the contrary, Brasílica sprints like a boss. 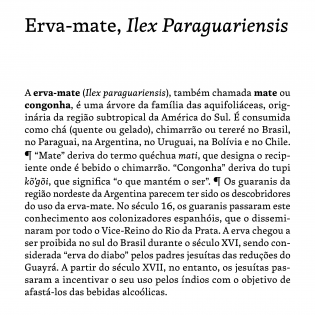