As I tried to choose which typeface to review, I had so many tabs open it’s a mystery my computer didn’t crash — but I found myself clicking back again and again to stare at the counter of Brucker’s italic o. I urge you to take a few seconds to look at it. It’s just fascinating. Jeremy Tankard really is one of the most interesting type designers out there.

When I studied type design, we spent a lot of time learning how tools dictate the contrast of typefaces, looking at models for expansion and translation contrast based on the shapes of pen nibs, and so on. And then, shortly after I graduated, Jeremy Tankard released Fenland, which bypasses all of these conventions and builds contrast as if letters are bent out of metal tubes. It blew my mind.

Now, with Brucker, Tankard once again consciously questions conventions — particularly the idea that a typeface requires consistency. The contrast does not follow the rules of the pen. Sometimes strokes thicken when reaching the stem. Counter shapes are irregular. Terminal angles are arbitrary. And yet it all comes together.

I love reading about process, especially when type designers purposely set a difficult brief for themselves. In the case of Brucker, Tankard asks: “Have we lost the ability to tolerate a letter that has not been through the calculated and cleansing algorithms of a computer? And why, so often, do we take refuge in the handmade?”

He answers this question by looking at the work of expressionists, and capturing that energy, without drinking from a single source. If I were to classify Brucker, I suppose I’d start by saying it’s a modulated sans serif (but I bet nobody would envision a Brucker upon hearing that phrase). It’s actually quite comfortable to read at text sizes, although the display is where it really shines, in all its irregular glory.

Looking at Brucker sometimes feels like watching a performer on a tightrope, or a live improvised show: there are moments where the performance almost falters, and the whole thing seems dangerously close to falling apart, but it somehow doesn’t, and that’s thrilling, and you can’t look away. The roman, with its chunky, hand-carved feel, sometimes just about escapes feeling at home in an episode of the Flintstones, but then it pulls back, with contemporary skeletons for the letterforms. Then the italic changes the texture and rhythm dramatically, with razor-sharp ink traps. It has lots of wonderful, thoughtful details (the Ĳ, for instance, would be a great addition to Hanna Donkers’ collection). Or the bold italic w: once again, I can’t believe those counters!

It is certainly expressive and has a strong presence on the page. It draws the eye with its restless energy. For text sizes, it might benefit from attentive typesetting, possibly with looser leading. It is certainly not a crystal goblet and it’s not for the faint of heart, but it is original and powerful and commands attention. I look forward to seeing it in use. 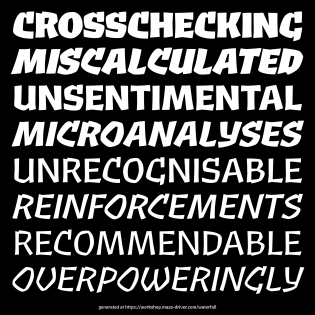 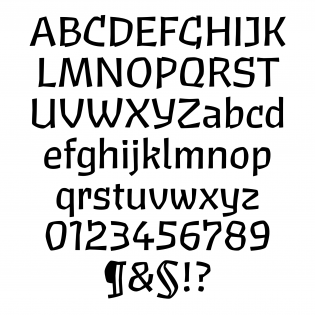