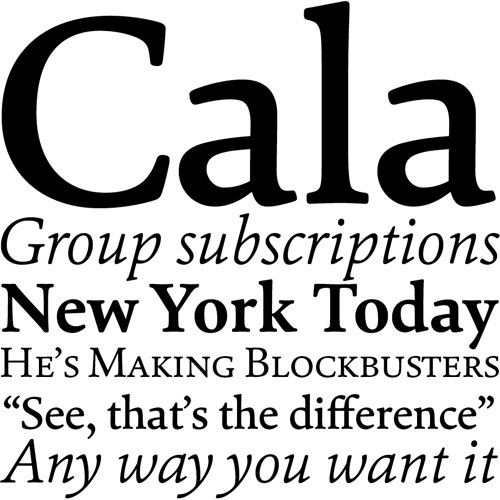 William Morris’ Golden Type, inspired by the founts of Nicolas Jenson, sparked a mania for Venetian types in the 1890s that continued for nearly 30 years. But since World War I the lighter types of “Garamond” and Francesco Griffo have pushed those of Jenson aside. Dieter Hofrichter’s Cala is notable not only as a contemporary Venetian but as one not rooted in the work of Jenson.

Cala has the low stroke contrast and sturdy bracketed serifs characteristic of Venetian Oldstyle types but not many of its idiosyncratic letters. The ‘E’, ‘H’, and ‘Z’ are not overly wide; the ‘M’ does not have double serifs at its apexes; the leg of ‘R’ ends in a serif; and the ‘e’ has a horizontal eye. The head serifs on lowercase stems are flatter and less beak-like than those of Jenson. The counters are larger and more open and the x-height is slightly taller. All of this makes Cala feel contemporary rather than musty.

Fifteenth-century Venetian printers did not have italics. Unlike most Jenson revivals, which have Arrighi-based italics grafted onto them, Cala Italic is a pure Hofrichter invention. It is more French Oldstyle than chancery cursive, though with less inclination. Furthermore, the inclination is consistent throughout the glyph set – another indication that Cala is a contemporary design.

Like most OpenType fonts today, Cala has a large glyph set, which is notable for offering ‘Th’, ‘ty’, ‘ct’, ‘sp’, and ‘st’ ligatures; long ‘s’ and long ‘s’ ligatures; and beyond the usual set of fractions, including 1/5s. There are no alternate forms of letters, other than the long ‘s’. The italic has no swash characters. In other words, Hofrichter has eschewed frivolity in favor of sobriety.

Cala is a quiet design, one that does not call attention to itself. This, coupled with its strong, even color, makes it a perfect typeface for books and other texts requiring a “crystal goblet” approach. 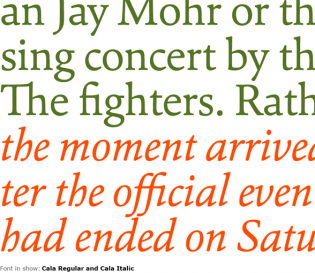 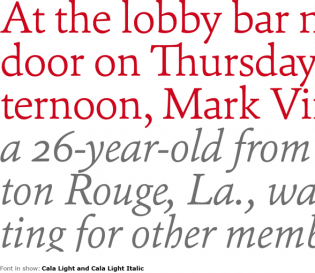 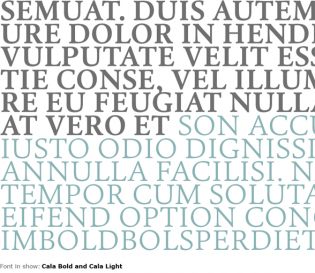 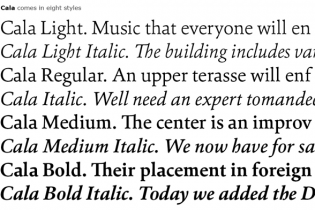