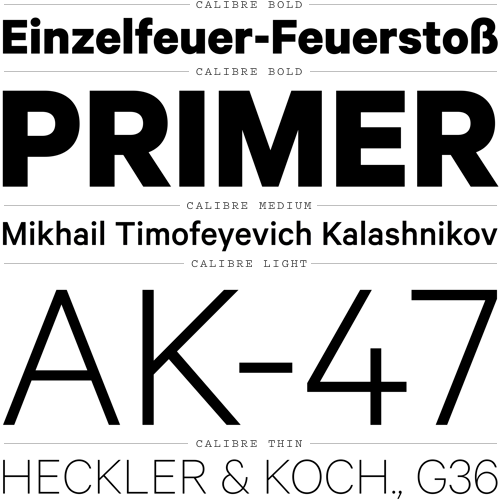 The skill has its advantages: 1) An ‘a’ is a common letter, so even a small quantity of text is likely to contain one; 2) Lowercase ‘a’ is often a rather distinctive letterform in a typeface, so it requires only a small fraction of my visual memory to retain a great number of them; and, lastly but importantly, 3) It’s impressive. Much like those contestants on the TV program “Name That Tune” who could identify a song in one note, I can often identify a typeface by one letter. If only this magnificent skill helped me make new friends at parties, I’d be all set.

However, there are a few faces that render my typeface identification abilities rather underwhelming. Calibre is one of them. The lowercase ‘a’ in this typeface is so distinctive and unlike any other in its category that anyone would recognize it in a second. I must admit, it was not an ‘a’ I loved easily. But as I’ve been setting the face quite a lot in the last few months as a typesetting consultant for WIRED magazine’s redesign, it’s grown on me. Now it seems like anything other than this quirky little ‘a’ would leave the face flat and colorless and, possibly, far too similar to others of its genre.

Calibre is one of a pair of typefaces designed by the [superlative goes here] Kris Sowersby in New Zealand. Calibre and Metric are two distinct typefaces designed simultaneously that share a number of characters, including A, B, E, T, X, b, f, i, l, m, u, x, and y. Then by a clever switch-a-roo of the glyphs C, G, J, K, M S, Z, a, c, e, g, k, s, t, z and 3, Metric takes the tone of a rational geometric whereas Calibre inclines towards the Neo-grotesque. Genius. (Note that each one has its own lower case ‘a’, which I’ve emblazoned in my cerebral database, of course.)

Calibre pays homage to the seldom-seen typeface Recta, designed by Aldo Novarese in 1958. Like Albert Jan-Pool’s FF DIN and Tobias Frere-Jone’s Interstate, both Calibre and Metric were inspired by the hyper-rational letterforms on street signage, proving, as Sowersby says, “typefaces can successfully originate from outside the canon of book-centric history.” Thankfully so.

Carolina de Bartolo is a typography and design history educator as well as the author of the book “Explorations in Typography”. You may regard any of the above claims for her extraordinary typeface identification skills to be vainglorious and largely unsubstantiated.