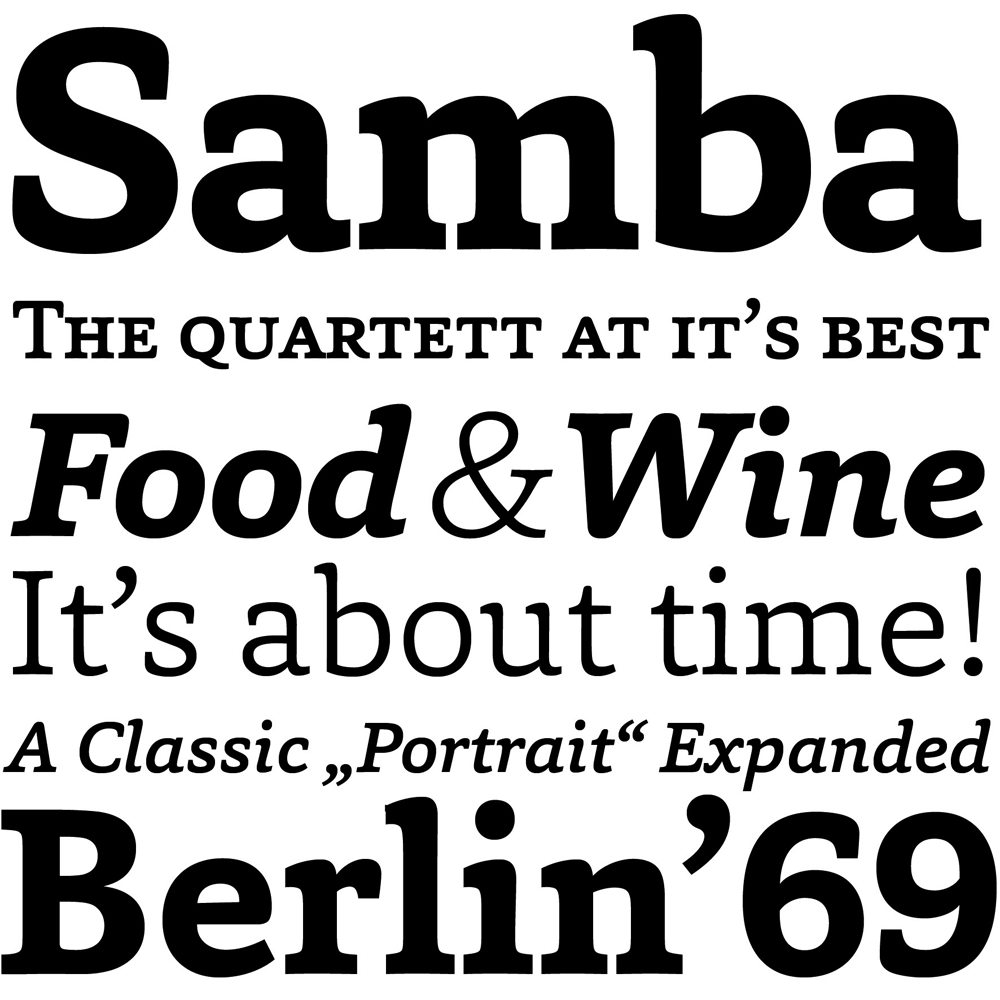 It is really easy to go from a list of sixty-odd typefaces to a shortlist of around six. Some will be triumphs of execution over vision, forgetting that the larger the family, the bigger the need for a key idea to unify the styles and justify the metaphor. Others will be indulgent explorations of form, things you admire from a distance, where the exu­berance of the typeface leaves no room for texts other than little bits of lettering. Still more will be for internal consumption by the community of type designers, not unlike the imagined constructions of paper architects. These often demonstrate a complete ignor­ance of what typefaces are for, the ego of the typeface trampling the personality of the typography. And some will just be boring.

But going from six to just one, that’s a different thing altogether. The shorter the list, the bigger the puzzle: What are the criteria for excellence? Is it a matter of shapes and patterns alone? Of innovative variety? Or ambition and scope? Perhaps it is a typeface that most questions our assumptions for our discipline, and opens up new paths for exploration?

Capita is none of that. Indeed, in the longlist of candidates it is very easy to overlook. Its character set covers the bare minimum for a text typeface — Icelandic volcanoes will not cause substitutions, but that’s pretty much it. There are small caps, and a modest set of ligatures to make sure that Kafka can tour Norway. The family’s single width spreads over just six weights, with neither the Extra Light nor the Extra Bold excessively so. And the weights look like straightforward interpolations, which defies a typog­rapher’s wish list. Neither is everything perfect with the details: the arm of the ‘r’ tends to lightness, as do the symmetrical accents. The comma and quotes have a touch too much contrast. And the x-height align­ment of the last five letters is too high for my liking.

So, what is it about Capita? Its letters have the consist­ent widths of contemporary typefaces, which helps create the even textures that smaller viewing areas benefit from. The vertical strokes utilize the swelling instrokes and careful bracketing on the baseline serifs to avoid the common “garden fence” effect of so many recent slab typefaces. This hint of swelling in the stroke extremes is amplified by the gentle cusping of the foot serifs, and makes the sturdy, low contrast texture friendly enough to read at length. The curvy instrokes flow into the main strokes effort­lessly, with a casual fluidity that makes conven­tional serifs look contrived and over­comp­licated. Details like the protruding chin of the ‘e’ and the separate strokes of the ‘k’ introduce a degree of surprise, and make the top of the ‘t’ an anomaly, and yet an obvious solution (and maybe the reason why the accents are a feature instead of a bug).

The most interesting shapes are the upright ‘a’ and ‘s’, which encapsulate the most fundamental typographic nature of the respective letters. The instrokes and outstrokes emphasise the balance of form required by typographic texts, whereas the smooth integration of the terminals into the main strokes gives the shapes a sense of finality, as if nothing else would do. These are, through their pared-down elegance, truly masterful curves. Omitting the instrokes would be trying too hard, a self-conscious abrogation of the complexity of forms for small sizes. In the kinds of typesetting we spend most of our time facing these days, Capita conveys a sense of “obviousness”, of definitive and effortless competence.

Imagine Capita replacing the — mostly uninspired — typefaces that default on our mobile devices. It would feel completely at home, its even texture doing the job of rendering readable texts perfectly, while showing up the dated, out of place shapes of the Helvetica clones as utterly out of tune with the fluid nature of our interactions. This typeface is not perfect, but it perfectly captures the moment. 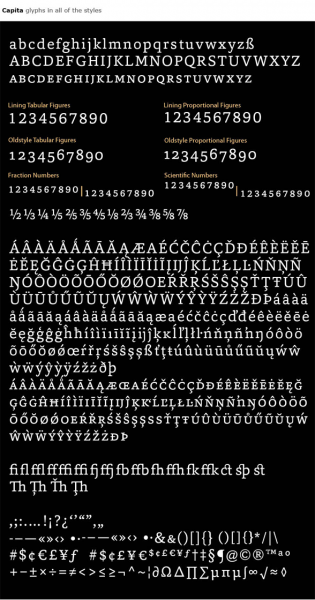 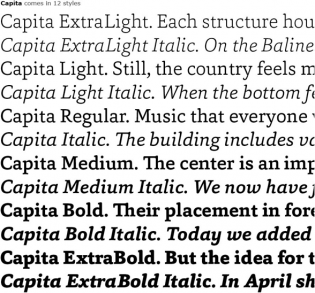 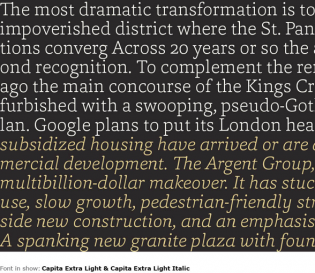