Carabelle is one little diva of a typeface: prancing merrily, boasting its oversized swirl caps, callowly waving its long contrastless ascenders. The face lends itself to hedonistic applications that are either genuinely festive or tongue-in-cheek childish, and come in rainbow colors, or maybe in slightly nostalgic pastel shades. In short, Carabelle is not something I’m likely to use in my daily work (but your mileage may vary).

It wasn’t the type user in me who was attracted to this upright script, but rather the researcher interested in the history of typefaces. Indeed, Carabelle has a peculiar pedigree that goes back more than a hundred years. Michael Hochleitner based his design on Calipso, a face shown in a 1930s specimen by the Italian foundry Nebiolo. He also looked at the very similar — virtually identical — Mirabelle, which he found in a book by Schriftguß AG from Dresden, Germany. And then there is Les Médicis by the French Fonderie Ch. Boudin (later carried by Deberny & Peignot) which also appears to be the same design.

Did the old fellows not only steal our best ideas, but also rip off each other like there was no tomorrow? Indeed plagiarism was an issue already back then, before technological changes to film, and later digital, made unauthorized copying easier. In 1931, Konrad F. Bauer complained about “certain companies from abroad that … usurp matrices of successful typefaces made by others” by means of galvanization, a process that enabled such unscrupulous foundries to reverse-engineer matrices from cast type.1

In this case, though, things are different, and the various versions are probably all legit. The face with the many names was originally created in 1912 by Wagner & Schmidt, a company from Leipzig that focused on producing matrices. They were sold to various foundries all over Europe, which then would make their own typeface variants, marketing them under different names. If you want to know more about this business model and the convoluted mess it left behind, talk to Indra Kupferschmid. She dipped deep into the Wagner history and gave a well-received talk about it at ATypI Barcelona.

The typeface’s original name is Isolde.2 Under this name, it was available from the H. Berthold AG and Gebr. Arndt & Co. in Berlin, from J. John in Hamburg, from Klinkhardt in Leipzig, and from Zanker in Nuremberg. C.E. Weber in Stuttgart stocked it as “Margarete”, Trennert in Hamburg used the same name as Schriftguß (Mirabelle), and Haas in Switzerland called it “Cleo”. Isolde even made it all the way to São Paulo, Brazil, where Funtimod sold it as “Athenas”. It is not clear whether Zierschrift Ossi (L. Wagner) and Linnéa (Berling) are also versions of Isolde, or whether they are based on another Wagner & Schmidt design known as Ella-Cursief / Card Italic.

Aside from a few details, all the aforementioned typefaces seem to be the same. There is also a heavier weight, halbfette Isolde, added in 1921. Many foundries carried both styles. La Fondografica in Turin, Italy called the light weight “Napoli” and the bold one “Palermo”.3, 4 And it doesn’t stop there. Fundiciòn Richard Gans in Spain had a typeface called “Royalty”. It is clearly related, but exhibits a number of design changes. Royalty obviously was not cast from the Wagner & Schmidt matrices, but represents an imitation with many different characters — a simpler ‘M’ and ‘N’, a non-descending ‘z’, etc. — perhaps modified to appeal to the local taste.

With so many historical traces left, it doesn’t come as a surprise that there are various contemporary interpretations. The light weight was revived by Nick Curtis as Monte Carlo Script NF (2002, based on Les Médicis, as seen in a Deberny & Peignot catalog) and by Sylvia and Daniel Janssen as Emily (T-26, 2003). Curtis also digitized the bold weight as Anna Nicole NF (2007; based on halbfette Mirabelle). None of these fonts is recommendable: they neither provide a facsimile nor improve on the original. Gans Royality (sic) by Iza W (Intellecta Design, 2007, based on Royalty) is a particularly poor and useless rendering.

Michael Hochleitner took liberties with the original as well, but his draftsmanship is so much better. Carabelle captures the spirit of the model and translates it to the 21st century. It is decidedly heavier, with dots being circular instead of oblong. The x-height is raised a tad, counters are more balanced, terminals (‘c’, ‘d’, and ‘s’) are simplified. Swashes on caps curl up more. Some overly loose and flabby glyphs have been tightened (‘DKRV’) or reimagined (‘V’, ‘3’). The design has not been smoothed to death, though. It still has a pleasant bounce to it. Carabelle comes with decent language support, a couple of smart OpenType extras (including alternates, arrows, and swash underlines), and an affordable price tag. Now enough with the theory already, and back to practice! I think I may find a use for it after all.

This investigation would not have been possible without the documentation compiled by Hans Reichardt for the Klingspor-Museum, Offenbach. Thanks to Michael Hochleitner, Jeremia Adatte, Ilja Wanka, and Jens Jørgen Hansen for providing specimens and additional information. 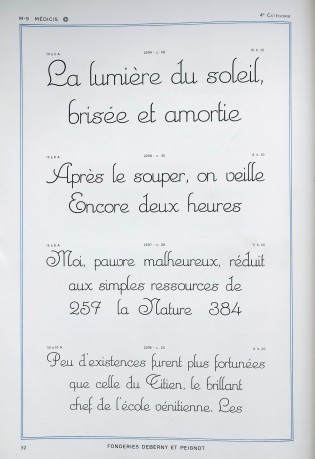 Carabelle’s ancestors: A showing of Médicis in a Deberny & Peignot specimen book. Unlike in Calipso, the ‘r’ has no base connector. (Photo courtesy of Jeremia Adatte)