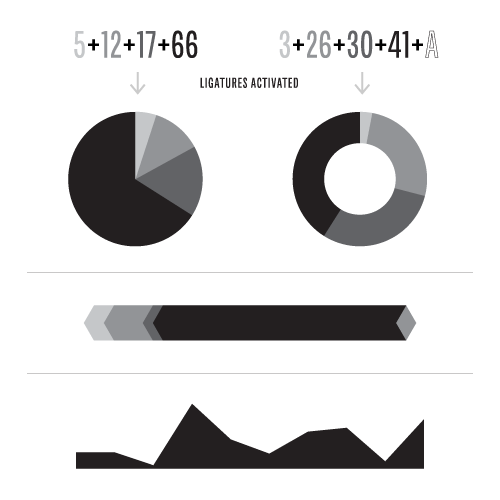 FF Chartwell is a set of three fonts* that together create a remarkable set of tools for creating bar, line, and pie charts. It uses OpenType ligatures to perform its magic – a series of numbers can be transformed into clean, perfectly rendered graphs, as you type.

In use, the fonts are pretty straightforward, and though it’s an overused phrase, it does feel rather magical: you type numbers, it creates graphics. The formatting for all three fonts is to type the numbers as a sum, with the numbers separated by plus symbols: 20+40+10+30 for example. The fonts have a set of basic numbers and letters (resembling a compressed Trade Gothic) you can use with ligatures turned off to type in and check your numbers. Turning the ligatures on transforms your numbers into charts, and demonstrates just how many glyphs these fonts contain – up to 10,000 in each style.

Each of the fonts has a set of specific features and capabilities. Chartwell Lines creates sparkline-style graphs, while Chartwell Bars creates stacked bar charts. It’s Chartwell Pies that most feels like magic though. Like the other two, it works in whole number increments, from 1–100, but what’s interesting is what happens when you go over 100. Anything up to 100 and you get a single pie chart, go over 100 and the remainder starts a new pie chart, and again at 200, 300, and so on. Magic! Seeing a font interpret your numbers to create graphics like that is pretty remarkable. With Chartwell Pies you can also add a letter to the end of your sum to transform the pie into a ring – ‘A’ for a small hole in the pie, ‘Z’ to transform it into a hairline circular chart.

For all three fonts, you can set each number in a different color and it’ll be reflected in the chart.

Chartwell is the first in a new category of fonts that use ligatures to transform text into graphical representations while leaving the text itself untouched. In terms of a milestone it’s similar to the move from expert fonts to incorporating standard ligatures and swashes into the one font file that OpenType first enabled. The methodology does require you to type in a particular format which slightly limits its flexibility, but the promise is clear: the potential to transform data into graphical forms without losing the original text. It’ll be useful in all areas of publishing, if only to relieve the chore of creating basic graphics. For the web, however, it could be transformative: instead of icons and other indicators as bitmap pictures, they’re glyphs, stored in the right unicode slots, and selected as ligatures for particular words or abbreviations.

* Update: Chartwell was initially self-released by Travis Kochel. In May 2012, the package was reissued as a FontFont with the addition of four new chart styles: Radar, Rings, Rose, and Vertical.

Aegir Hallmundur is a designer and illustrator living and working in the south west of Wales. He is responsible for The Ministry of Type, a website mainly about type and sometimes calligraphy, illustration, architecture and photography, which he claims to one day start writing for again. 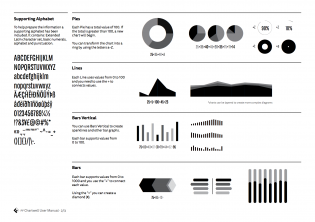 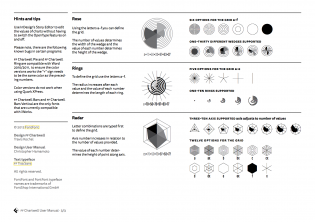