Collaborative projects are nothing new in typeface design, but Colvert was developed specifically by designers native to each script. This is not axiomatically a Good Thing; but the team’s aim to eschew enforced homogeneity, and to seek “a minimum optical continuity […] so each one can express at the best its own characteristics”, is fundamentally correct and typographically unimpeachable.

The development of coherent typographic families that span many scripts is, arguably, the most significant advancement in typeface design in the last decade. It also raises profound questions for type designers about typographic hierarchies, related styles, and the range of originality and innovation in the context of each script. Until recently, most such typefaces were the products of original equipment manufacturers (OEMs) and major foundries with branding clients. Colvert is an example of this process maturing into the wider design community, where freedom from external briefs allows for greater insight.

The Latin, unsurprisingly, is the least exciting of the four scripts — but it establishes a reference tone and formality for the regular and sets the relationship with the secondary style. The other three scripts (on which I write with different degrees of confidence) combine contemporary and traditional elements that impart personality and uniqueness, and make the family “of its time”. Colvert’s designers treat modulation, counter shapes, and the design of instrokes and outstrokes flexibly, foregrounding the integrity of each script without sacrificing functionality.

The italic is a notably nice touch across the scripts, dealing with the different conventions for secondary styles with flair and sensitivity. I am particularly pleased to see an Arabic which explores degrees of formality within a key style as a route for typographically rich texts. 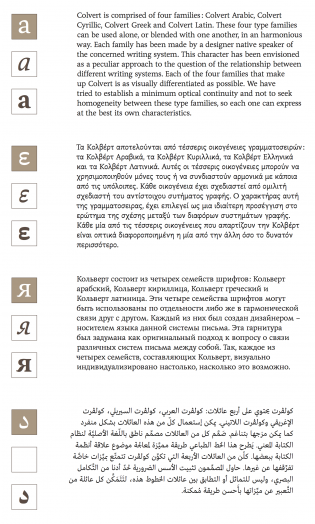 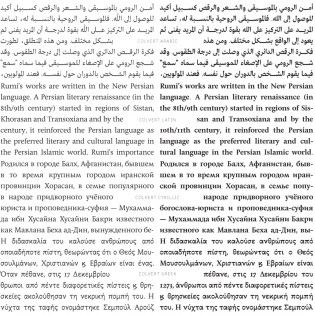