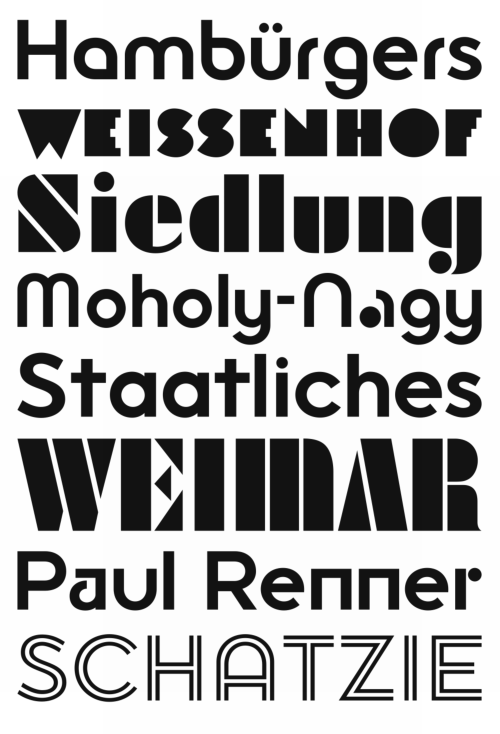 The Bauhaus school, founded by Walter Gropius, existed in three German cities: Weimar (1919 to 1925), Dessau (1925 to 1932) and Berlin (1932 to 1933), before it was closed by the Nazi regime. The Bauhaus had a profound influence upon subsequent developments in art, architecture, graphic design, interior design, industrial design, and typography.

Today we find many digitized Bauhaus style typefaces in different libraries, e. g. Linotype, Elsner + Flake, FontFont, P22, and The Foundry. The latest edition is Dessau, a 11 font set designed by Gábor Kóthay for Fountain (Sweden). Kóthay is a multi-disciplinary artist and type designer, who works in a sunny southern Hungarian town as a graphic designer and teaches second-form art students. He is the co-founder of Fontana Type Foundry.

Kóthay focused his Dessau is on the Hungarian influences of the Bauhaus: “I wanted to commemorate Hungarian designers and teachers, e. g. Breuer, Moholy-Nagy, Molnár, or Kassák. We’re under influences of these design personalities for more than sixty years.”

Kóthay was authentic with letterforms and based his work on original samples. He started his work in 1987, when letters have been originally designed for different installations in 1987 for the Academy of Fine Arts, Budapest. The Dessau collection offers a broad variety of Bauhaus type styles. We find the Futura-like “Dessau Future”, two “Stenzil” weights that are close to Albers’ stencil work, the hand drawn “Dessau Alt” and a contemporary looking “Dessau Neu”; “Geometrik” and “Plakat” are two extraordinary Display typefaces.