Alexander Sheldon (AKA Match & Kerosene) expands an under-represented genre to new levels of customization with Detroit, a multi-dimensional “layering” font with a simple, sturdy Gothic base that revives a classic genre without being mired in it.

Although dimensional fonts aren’t rare, Sheldon strikes a difficult balance of contemporary and “retro”. Most typefaces from the prismatic genre are uninspired or clumsy remakes of their inspiration. Detroit takes the approach of being historically referential without sacrificing innovation – the outcome is a face that’s as versatile as the genre allows.

Furthermore, with a few exceptions (such as Alphabet Soup’s PowerStation, or Virus’ Hopeless Diamond), prismatic faces lack functionality – especially in attempting the classic effects they emulate. Although it employs a technically simple solution to this issue, Detroit’s layering is practical and effective.

Detroit contains 12 fonts that can be layered in several combinations to create titling effects often seen in sign painting and other hand-crafted lettering. What distinguishes Sheldon’s approach from other layered fonts is an emphasis on control and variation based on user discretion. Inlines, outlines, bevels, and drop shadows are all applied with minimal effort, and most of these effects can be applied independent of each other. Layers can be colored to indicate different angles and light sources and alternate characters offer even more variety. The possibilities are unexpected and charming. (Click the “DETROIT” thumbnail for an animated sampling.)

Detroit succeeds not only in its capacity for variation, but in its simple beauty. A modern take on 1930s lettering, it captures an under-represented aesthetic and revitalizes it for the 21st century. 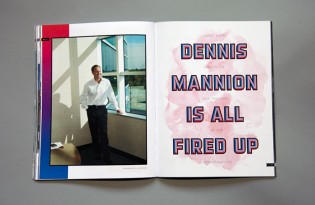