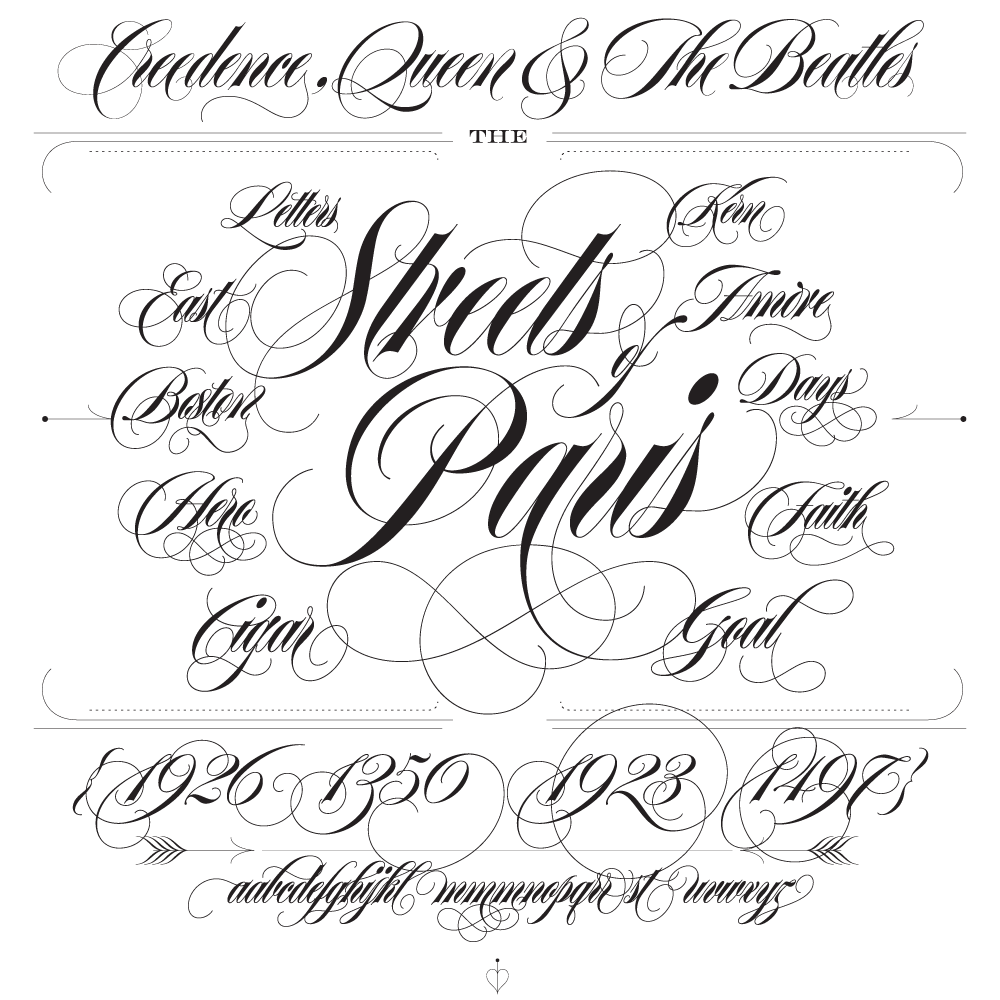 Erotica is truly worthy of its name. Its character springs from its excesses, but its allure is owed to Maximiliano Sproviero’s developed skill in coordinating the complex relationships among the voluptuous thicks and razor thins, as well as the seemingly endless flourishes and alternates.

Erotica’s three script variants (Big, Inline, and Small) playfully move between the natural flaring of a steel pen’s written forms and the tricks only possible in a drawn Spencerian script. Erotica offers filled loops and delicious curves that lasciviously and lachrym­osely flare just before the turns, promising delights to those willing to explore. And though it pushes the boundaries of scripts in these constructed ways, it avoids losing itself to them. As a result, Erotica can stand with ease in the most sophisticated contexts, which only heightens its appeal. The TDC’s imprim­atur only confirms what is clear from just a few settings: there is excellence on display here.

Though Erotica comes in weights named Big and Small, there is truly no way to set Erotica below 48 points without losing all of the benefits of the design. And though the Small cut seems to acknowledge that not everyone has the luxury of placing a single word on a magazine cover, you should put away any thoughts of setting an entire formal invitation with this family (which wouldn’t have been terribly erotic, anyway). Fortunately, all of this space-consuming script eroticism comes with a hairline slab serif to provide a fantastic contrast. Erotica Big is a garden of delicate vines through which Capitals Big can weave.

The best aspects of Erotica’s character are likely owed to the relative youth of Sproviero as a script designer. This family feels unique and alluring because it skirts the edge of what “should” be and equips the typesetter with enough flourishes and ornaments to be danger­ous. In fact, it seems to knowingly go too far at times, just to remind you that the guard rails are gone. It’s a simple matter to create a terrible mess with Erotica’s cabinet of tricks. But the rewards for purposefully indulgent play are simply too great to resist.

For a deeper look at Erotica, Spencerian scripts, and Sproviero, I recommend Paul Shaw’s excellent review for Print.

Chris Rugen lives in Philadelphia, where his wife and daughter endure his longstanding fascination with type's unique role in culture and communication. He splits his time between his home and NYC, working as a Design Director at Columbia University.