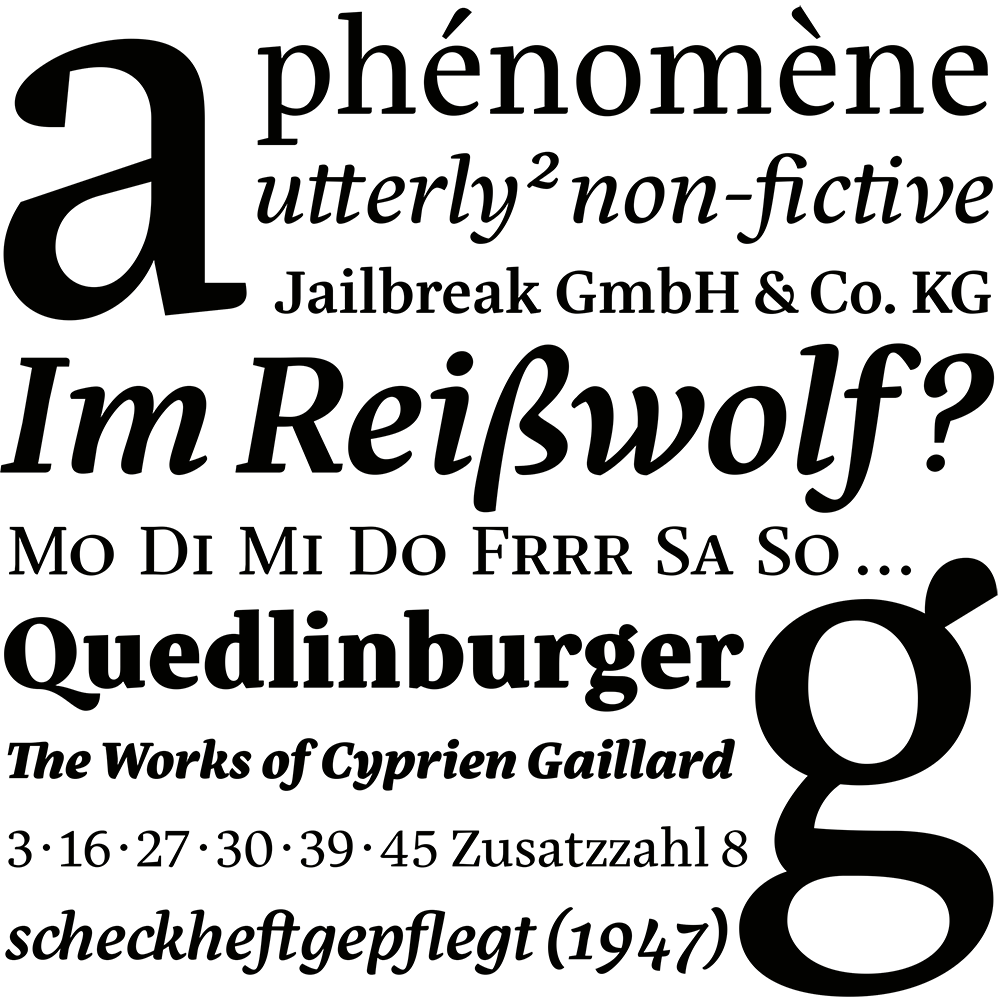 Eskorte is the debut release of Elena Schneider, a graphic designer, lettering artist, and typeface designer who currently commutes between Hamburg, Germany, and Húsavík, Iceland. Schneider started the serif family three years ago while studying type­face design at the University of Reading. The outcome was released by Rosetta in 2013.

The base of Eskorte is a contemporary and confident roman. It is clean and sets well but, luckily, has not been polished to boredom. There’s a lot of character here, as in the sharp cuts in the ‘a’, or the ‘g’ with its sassy ear. The ampersand reminds me of a kid proudly flexing his biceps.

What made me fall in love with Eskorte, however, was its italics: they are powerful and lively in a useful way. Extenders, as in the ‘f’, combine resolute kinks with pointy “foxtail” terminals. I get a kick out of the abrupt upticks in ‘a’, ‘n’, and ‘d’, etc. And I’m especially fond of how diagonals are handled in ‘w’ and ‘y’.

The eszett exhibits neither the Sulzbacher form nor the one that (over)emphasizes the ‘ſ+s’ origin. Eskorte’s ‘ß’ is original — slightly fancy, but fully functional. There’s not much to dislike. A pet peeve of mine are unusual ligatures that are on by default. The italic has a few, like ‘ti’, which get in the way in German compounds like Ost·indien. (I admit that this is a somewhat hypothetical hitch.)

The family spans four weights, and that’s more than enough for most purposes. Still, it’s a pity that the hefty Display cut included in Schneider’s MATD specimen has not yet been explored further. There’s hope for a future — separate — release, though: the style that borders on blackletter territory now appears on Schneider’s portfolio site as Paroli.

Because this is a Rosetta release, it goes without saying that Eskorte covers a wide array of languages. In addition to the Latin, there is also a tantalizing-looking Arabic. It was designed in consultation with Titus Nemeth of Nassim fame, and was awarded first prize for Arabic text typefaces in the 2013 Granshan Type Design Competition. At Reading, Schneider also embarked on an Armenian, but that branch has not yet been released.

While researching Eskorte, I stumbled upon a few skeletal traits that it has in common with Skolar by David Březina, another MATD grad. (Schneider helped to expand Skolar; in particular, she drew its most extreme weights.) See, for example, the straight leg of the ‘R’ with a one-sided serif, the slanted spur of the ‘g’, the squarish ‘S’… I don’t know whether this can be ascribed to similar personal preferences or whether this is something one would pick up at Reading — or, rather, whether Rosetta is pursuing a clever master plan to build a library of loosely con­nect­ed families! One thing’s for sure: the two type­faces may not dress alike, but they pair surprisingly well.

A few years ago, it was quite common for the project of a Reading grad to be subse­quently released commer­cially, either by an estab­lished publisher or as the foundation of a new (micro)foundry. (See the archives at typefacedesign.org — especially the classes of 2006 and ’07.) In more recent years, the ratio has decreased.

The numbers are not really significant, and they cert­ainly have nothing to say about the quality of the projects or the employment prospects of graduates. After all, the course is primarily concerned with ex­ploration, study, and research — not production. Still, I always rejoice when another outstanding stu­dent design project finds its way onto the market. I applaud initiatives like TypeTogether’s recently announced Typeface Publishing Incentive Program, or Rosetta’s repeated support for promising multiscript grad projects. Marhaban — welcome, Eskorte! 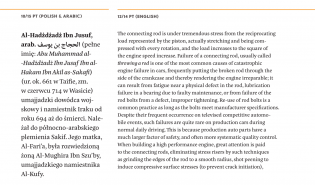 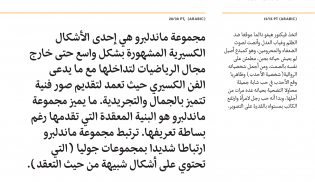 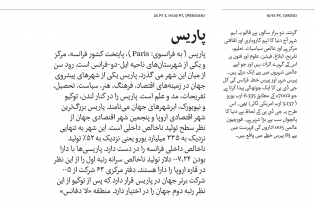 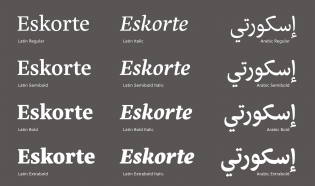 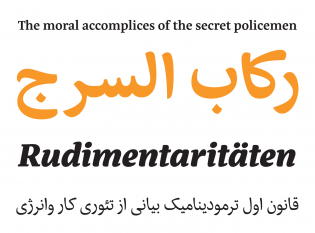 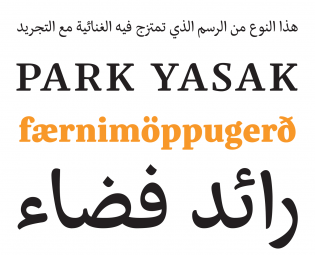