For most of the 20th century, the Globe Poster Printing Corporation in Baltimore helped define the visual culture of America with their letterpress and silkscreen printing. Their iconic Dayglo color palettes and in-your-face use of wood type promoted some of the biggest names in entertainment, from James Brown to the Beach Boys.

One of the most distinctive elements of the Globe Poster style is the lettering of Harry Knorr, who worked at Globe for over fifty years. Knorr’s lettering bounces off the page in ways that are virtually impossible to achieve with traditional letterpress fonts. The animated styles were rendered as unified designs and cut into printing blocks — backwards, as needed for relief printing — sometimes directly by hand without any sketching.

Thanks to digital typography and OpenType technology, Dai Foldes — a graduate of MICA, where most of the Globe material now resides — was able to capture the lively feel of Knorr’s work in a typeface. Eubie Script borrows its pizazz from a variety of Knorr’s different styles, and the result is a contemporary homage to the lively Globe aesthetic. It manages to feel simultaneously fun, vigorous, zippy, and spontaneous without being gimmicky, ironic, or dated.

The typeface was released on July 31st, 2014 — just in time for TypeCon in Washington, DC. Upon seeing it, I couldn’t resist using it for the slides of the official Type Quiz two days later.

Eubie’s verve is a welcome addition to the realm of digital script typefaces, offering a new option based less on calligraphy or single-stroke lettering than on the classic “built-up” approach to casual lettering that flourished on cereal boxes, hot rods, comic books, and concert posters between the 1940s and 1970s. It would pair well with other faces based on built-up lettering like Burbank, or could serve equally as well being the expressive member in a pairing with a more straight-laced and subtle workhorse.

The multitude of context-specific ligatures and alternate glyphs included in Eubie ensure a natural bounciness without distractingly repetitive forms. That bounciness is applied liberally too, resulting in a strong rhythm and liveliness that makes just about any words look cool. Combine it with some bright colors, bold arrows, and irregular box or burst shapes for maximum impact.

Nick Sherman is a typo­grapher and typographic consultant based in New York City. He is a co-founder of Fonts In Use and a columnist at A List Apart. He serves on the board of directors for the Type Directors Club, and the artistic board for the Hamilton Wood Type & Printing Museum. Nick has worked at Font Bureau, Webtype, and MyFonts, directing web design and promotional material for typefaces in print and digital media.

Film for a Globe poster printing block promoting the 7th Annual Shower of Stars in 1967. Image via NPR. 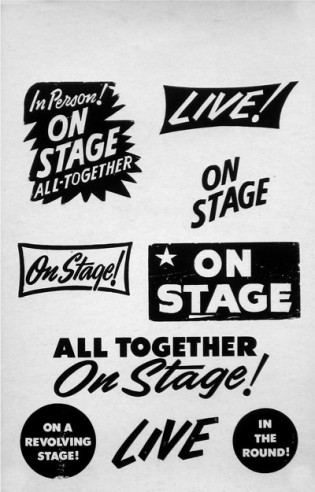 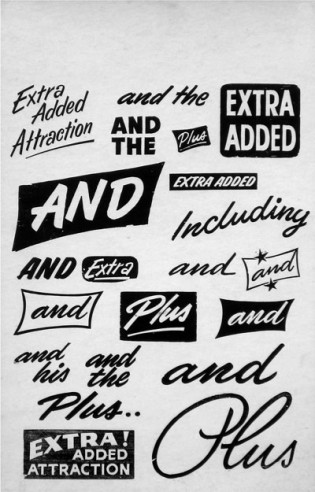