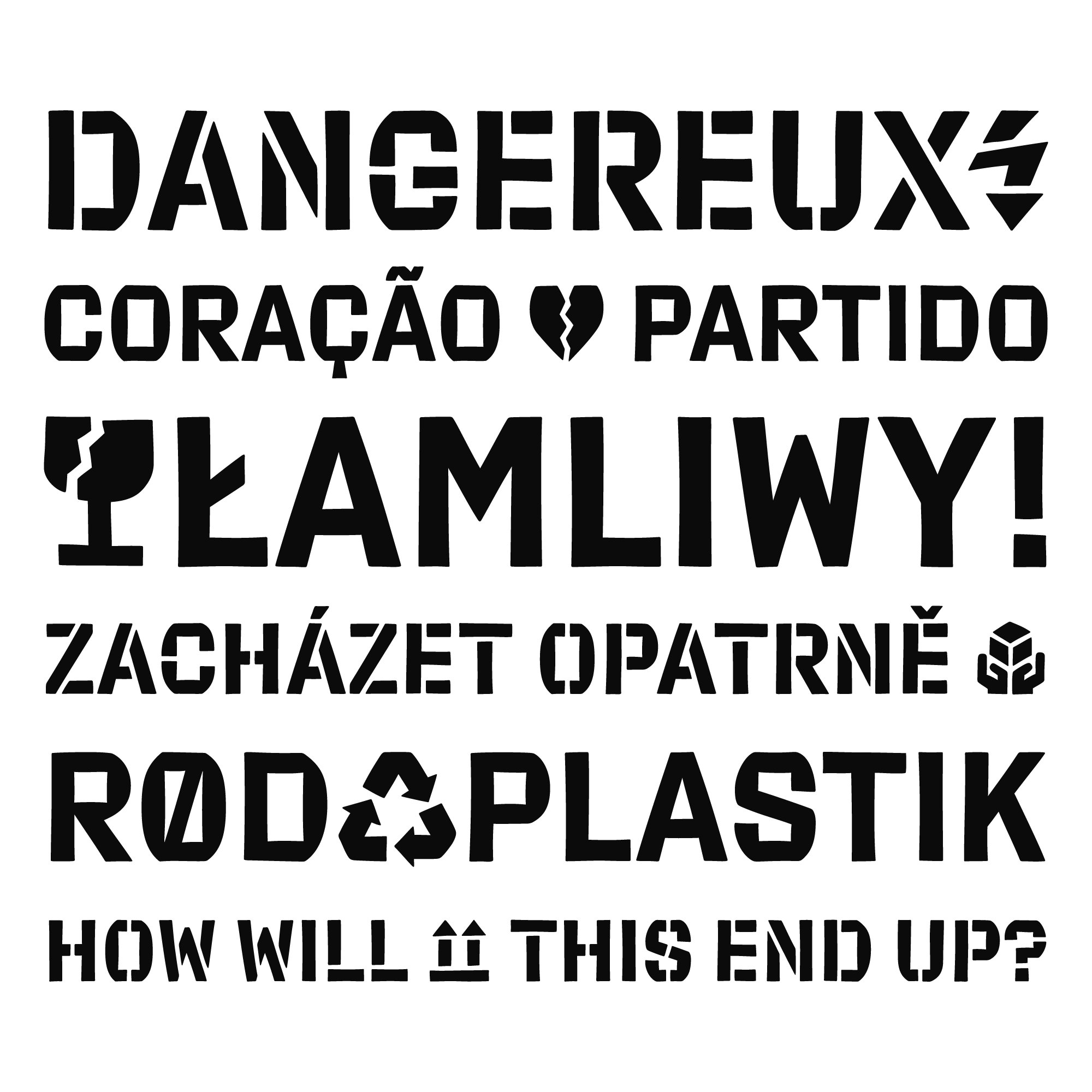 Though typeface designs are traditionally based on written letters, which themselves are comprised of strokes, the practice of typeface development is premised on contours instead. Open a standard font-editing application today and you will see nodes and handles that can be manipulated to determine contours, the shape of the edge where black meets white.

This was no less true at type’s beginning. Typecutters during the Renaissance may have been looking at pen-stroked glyphs for guidance, but their work involved engraving and filing metal punches — establishing the edges of the glyph they wanted. In the days of metal type, contours on the interior of letters were achieved by different technical means than outer contours. Instead of trying to dig a hole in the middle of the letter-end of a punch, the creator would carve a punch to be punched into the punch — a counterpunch. For example, a counterpunch shaped like an ellipse could be driven into the end of an uncarved punch to create a negative shape that would become the middle of an O. Then the punchcutter could carve and file away the outer round shape, leaving the desired letter. We still call the open interior part of a letter a “counter” because of this origination with the counterpunch.

Even though determined by differing punchcutting processes, the inner and outer contours of a glyph were always intended to work in harmony, usually to emulate the effects of a pen. But more recently, lettering artists and type designers have pondered what would happen if inner and outer contours had more independence from one another. (Jeremy Tankard’s Fenland is one example of this experimentation; the more recent Karelia from Monokrom is another.)

Jesse Ragan’s Export offers glyphs that are rounded on the outside but rectangular on the inside. This all-caps typeface was based on anonymous letters found on a shipping box. The rectangular counters also make Export resemble a sanded-down version of “collegiate” fonts. But the first antecedent I thought of was Freeman Craw’s Ad Lib (1961).

The creative idea behind Ad Lib, which offered bouncy letters with casually placed, straight-sided counters, apparently did not originate with Craw. Harold Adler penned letters like these for the credits and poster designed by the legendary Saul Bass for the 1958 film, Bonjour Tristesse. But as Ad Lib, with ATF’s distribution, the design gained popularity over the next couple of decades, taking its place as one of the emblematic types characterizing those glory days of American advertising typography.

The contradiction of squared insides and round outsides felt at home with the other lackadaisical elements of Ad Lib’s design — verticals out of plumb, uneven baseline, and so on. More recent takes on the idea, like Brian J. Bonislawsky’s Galindo or Stuart Sandler’s Nightclub or stenciled ¡Warning!, repeat that cartoony feel. Export takes on a tougher brief: to get square and round to work together in a much more rigid, regularized context. Keeping the tops and bottoms of glyphs flat while the outer sides are curved was key to adding that mechanized feel; that decision also helped avoid an undesirable pinched effect at the corners.

But as industrial as this typeface appears at first, it is not a sterile idealization of geometric forms. There are no straight lines or perfect curves to be found. These look like painted by hand, or stamped onto a semipermeable surface. The counters I’ve been describing as rectangular are actually made up of convex segments that bow into the counterspace; the inner contours are not so much straightened as turned inside out. This is a much subtler handcraftedness than Ad Lib’s, but it lends pneumatic energy and welcome warmth to the design. (The otherwise similar Ironstrike is chilly in comparison.) A minor regret is that the font does not include contextual alternates that would prevent the identical imperfections that can show up when letters are doubled.

The relationship between inner and outer contours is the most striking feature of Export, and that of course only occurs in the curved glyphs (eleven of the twenty-six letters, for example). As a result, with a little bad luck, some settings might turn out unbalanced. If your headline happens to read HEAVENLY CURSORS or FAKE JOBS, the first word will look far soberer than the second.

The Stencil cut of Export is a still stronger allusion to the industrial vernacular. It may be less versatile because of the explicitness of that reference, but if a stencil typeface is called for, Export stands out from the crowd. There is an unintended effect with some diagonal letters, like the V, Y, or especially the N: they can read like thin white letters with a thick shade (akin to R. Hunter Middleton’s Umbra) rather than thick black letters with thin stencil cuts, an unfortunately distracting illusion.

Export’s funkiest letter is its Q, with a tail that crosses over its right side rather than its bottom. It is a charming detail borrowed from the shipping-box letters that inspired the typeface. A more conventional alternate is also supplied. It is hard for my eye not to see the S as a little too wide; otherwise, though, proportions and details are well crafted, just as one would expect from this seasoned designer. The squared-off @ is fun, though it falls apart in the stencil cut.

Export is rigid but full of character, industrial but handmade. Like square inner contours and round outer contours, these contradictions are not easy to reconcile. But when that accord is persuasively achieved, the result is a dynamic, satisfying typeface.

Craig Eliason is a professor in the art history department at the University of St. Thomas in St. Paul, Minnesota. His research focuses on the history of type design. He also designs typefaces, some of which have been released by his foundry, Teeline Fonts.