Gerstner-Programm from Forgotten Shapes restores a previously inaccessible typeface to a new audience. Sharing this important work allows designers to examine past technologies and their aesthetic outcomes, and provides intimate insight into the late Karl Gerstner’s methods and approach.

“We prefer the original Grotesque. We take the view that instead of drawing new types, we should (subtly, subtly!) improve the originals (the best, the tried-and-tested). First. And, second, we should develop them harmoniously (meaning coherently), as completely as possible.”

It’s a compelling approach: framing innovation as a refinement of past works feels perfectly contemporary in light of the remixing, curatorial working methods that pervade art and design today. In attempting a systematic Grotesque in the vein of Univers or Helvetica, Gerstner created an interesting tension. Simultaneously appreciating the “restive” nature of Akzidenz and trying to systematize it led to a utilitarian typeface whose character remains lively and unique, while also being wholly cohesive.

The typeface itself deviates significantly from Akzidenz in subtle ways, with a more condensed overall form and a smoothing out of some of the source material’s unpredictability. But Gerstner also introduced some new shapes to his model — most notably the Helvetica-style R and a Univers-style K. These unique traits, combined with the intense detail paid to the harmony and readability of the typeface, are quite an accomplishment. Given the volume of Grotesque typefaces currently in circulation, these small differences and tensions set Gerstner-Programm apart, as does its design methodology:

“Every style has to combine harmoniously with every other style. Harmoniously means here: Exact inner conformity of the variants based on regularity — and not outer similarity derived from conventions.”

These constraints led Gerstner to a parametric approach, in which everything was painstakingly systematized. This method, as well as Gerstner’s larger work in programmatic design, has additional relevance now, as user-interface design adopts parametric methods from type design.

Nevertheless, although forward-thinking and prescient, Gerstner-Programm is a product of its time. Drawn for Diatype phototypesetting technology, the forms responded directly to the nuances of phototypesetting (and that specific typesetting machine). That technology was quickly supplanted by computer typesetting, and a usable form of Gerstner-Programm was lost for several decades. Before this reissue, the most notable application of Gerstner-Programm was in Kompendium für Alphabeten: eine Systematik der Schrift (translated into English as Compendium for Literates: A System of Writing), Gerstner’s systematic analysis of writing, which, like much of his work, pointed toward our current production methods. The book’s introduction states: “[I]n anticipation of the not so distant future, [it] supplies parameters for the programming of electronically controlled, i.e., computer typography.”

While Gerstner-Programm is a valuable, fascinating, and beautiful typeface, it also arrives at a sad time: Gerstner passed away earlier this year. The lessons he left us will continue to resound through graphic design as a discipline, and the restored Gerstner-Programm provides a fresh perspective on his legacy. 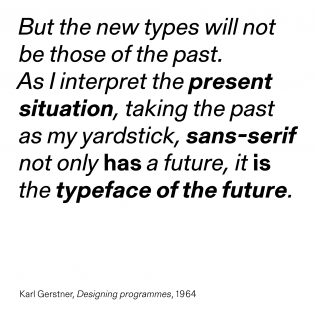 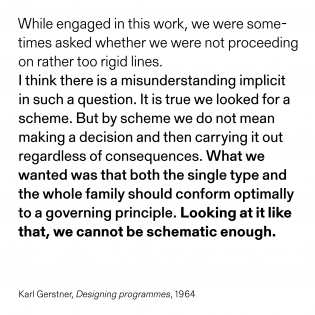 In 1972, Gerstner had the first edition of his Kompendium für Alphabeten – Systematik der Schrift typeset in Gerstner-Programm. It’s one of the few times he actually used the fonts. Private collection (Stephan Müller), © Stephan Müller.

Karl Gerstner first comprehensively formulated his conceptual analytical approach in his book Programme entwerfen (Designing Programs) from 1963. In the same year, he showed how this program can be applied to a typeface family in Typografische Beilage 6, a supplement to Der Druckspiegel. Private collection (Stephan Müller), © Stephan Müller. 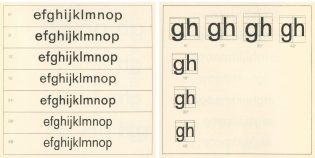 The intended program was developed in a coordinate system in which the widths and weights differed by a factor of 1.25. For the italics, Gerstner envisaged an angle of twelve degrees. Private collection (Stephan Müller), © Stephan Müller.

In addition to the published “centerpiece” (marked in red), the specimen provides an outlook to another twenty-four styles that were planned for Gerstner-Programm. Staatsbibliothek zu Berlin, Preußischer Kulturbesitz, © Stephan Müller.