You know what really sucks? Coding for hours only to realize you’re using a terrible monospace font that shoots lightning bolts of tension through your forehead. You know why that happens? Because designers and coders don’t understand what they need from each other, same as every other Internet Design Argument since 1996. Ha ha ha… Ugh.

I code, nearly every day, and I hate looking at typefaces for code. Just hate it. They’re almost all over-rationalized and over-geometric — usually because the designer thought it appropriate to connect the monospace’s rigid spacing requirements to its geometry, making the entire thing rational. That is exactly the wrong approach to take for a typeface someone’s going to be staring at for hours at a time.

From a rational point of view, a systematic information display makes sense for code: you’re analyzing information, you’re creating a system of thought, and you need to keep things clear, so the shapes should follow that pattern, right? But that’s not how human brains work! We need to see differences in a pattern to comprehend the pattern.

Gintronic is perfect to look at for code, because it is not at all geometric in tone. Quite the opposite, actually; it’s got tons of irregular and humane details to it, like the lowercase r’s wedge-shaped shoulder, and the unexpectedly narrowed spur on the lowercase a, or the weirdest (but cutest!) question mark I’ve ever seen in a monospace. These irregularities create a pattern of visual form that feels written, rather than machined. It’s a system of letters made not necessarily for information analysis, but rather information comprehension. In other words: I could read a book set in this stuff.

Gintronic’s hyper-individualization of shapes within its em square is delightful to look at, and the technical characters have just enough whimsy to make it fun to work with. And, after a few hours of looking at it? No headache! I will take that, yes, thank you. 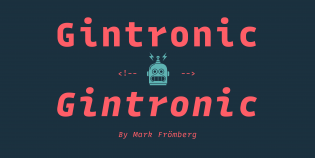 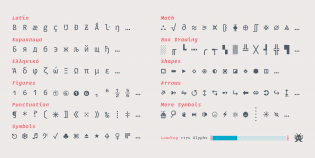