Imagine having only a handful of quality text typefaces available for Latin typography. Now imagine one of that handful, an essential workhorse face, suddenly removed from circulation for legal reasons. As outlandish as this scenario may sound to users of the Latin script, that’s exactly what recently happened for users of Hebrew.

As a result of a lawsuit between the heirs of Henri Friedlaender, the designer of the popular 1958 Hadassah Hebrew, and Masterfont, the largest Israeli font foundry, the latter’s ubiquitous version of Hadassah was taken off the market. The five-year-long litigation was decided in favor of the Friedlaender family in 2011. The decision was appealed and finally upheld by a Jerusalem court in July 2015, making it a watershed case in the history of copyright protection for type design (in contrast to the trademark or software protection that type designers and foundries in the US rely on).

Hadassah, named after a printing trade school where Friedlaender taught, is the Hebrew legibility typeface, interpreting the traditional “serif” letter through a Modernist esthetic. Its robust weight, low stroke contrast, open counters, simplified forms, and somewhat rigid appearance make it easily readable at small point sizes. Frank-Rühl, perhaps the most likely contender for the unofficial title of the most popular Hebrew text face, is fussy and idiosyncratic in comparison. And Hadassah’s pronounced typographic quality makes it better suited for books and periodicals than the less formal David and Narkissim (the two other contenders), which are more calligraphic.

To satisfy the steady demand for a legal digital version of Hadassah, the Friedlaender heirs approached Yanek Iontef, an independent Tel Aviv type designer, who went back to the original drawings as a basis for his design. The new typeface, released as Hadassah Friedlaender in October 2015 in two weights, is a faithful reconstruction of the original — as it was first conceived.

The resulting face represents the shape of the letterforms very well; many details that were lost in the earlier version, like the subtle curves and rounded corners, have been reinstated here. Significant improvement over the old version is a true bold design, not a digitally generated one. What the new design does not reflect as well is the finalized original type. As with any digitization, the letterfit that existed in metal needs to be recreated from scratch. As a result, kerning in a setting of Hadassah Friedlaender does not compare well to the original. In addition, a digital reconstruction based on drawings does not take into account adjustments and tweaks to the letterforms that happen in the course of punch-cutting and other stages of production of the metal type. In this case, the changes to the design after the drawings were given over to Amsterdam Type Foundry appear slight, and a careful comparison of the 1958 metal letterforms to Hadassah Friedlaender yields only minor differences. A few more departures were made by Iontef deliberately: the only ascender was shortened for practical reasons, for example, and the lining and hanging figures were completely redesigned to harmonize with both Hebrew and Latin.

One feature of Hadassah Friedlaender that comes as a pleasant surprise is the brand-new set of Latin characters designed by Iontef to harmonize with the Hebrew. Something that we may have come to take for granted with other non-Latin scripts in recent years has seldom been successfully attempted with the Hebrew script. A few Hebrew designs were made to complement an existing Latin, as is the case of Oron and Univers, but the other way around is still a novelty. The Latin in Hadassah Friedlaender is refreshingly unassuming. It mixes well with Hebrew; has similar feel, texture, and color; and its structural similarities to the Hebrew do not appear forced or contrived. Unexpectedly, this Latin does not look embarrassing when used on its own.

Misha Beletsky is the President of The Typophiles and Art Director at Abbeville Press, a publisher of ﬁne illustrated books in New York. He is a member of of the Non-Latin Advisory Board of the Type Directors Club, as well as of the Editorial Board Member of Type Journal. Misha is the author of "Zvi Narkiss and Hebrew Type Design" and The Book Jackets of Ismar David. His new book, The Noblest Roman: A History of the Centaur Types of Bruce Rogers, co-written with Jerry Kelly, is available from David R. Godine. 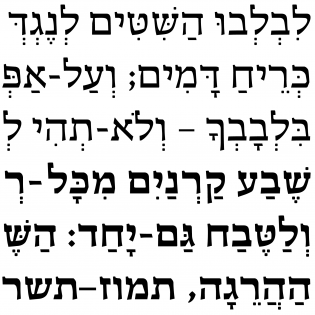 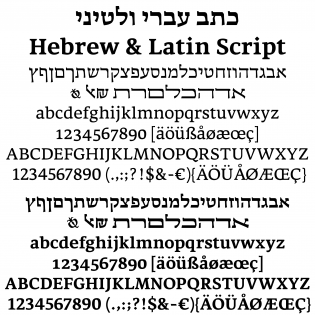 Alef (א) in the bold weight. The outline shows the new digitization compared to the Masterfont version in gray.