My straight-from-the-gut grading system for new typeface releases ranges from “oh boy” — best expressed with a face-palm emoji — to “oh no”, as a sigh and sign of affirmative envy. Darden Studio’s Halyard is on the outer end of the latter.

Transcending the ego of a single designer, Halyard is a collective effort. The credits show no fewer than nine individuals and one robot (iKern) involved in its development. One — or at least I — can sense the elaborate process behind this family, to which some of the sharpest eyes and minds contributed. The accumulated sensibility for family relationships, proportion, rhythm, curve tension, and the interaction of shape and countershape is utterly overwhelming.

And yet I feel it’s obvious that the ingenious mind of Joshua Darden is behind the overall concept of this design. Little information is to be gathered about Darden, who remains a silent hunter and an almost mythological figure. Since his release of Freight in 2005, there is no doubt that Joshua Darden is a highly imaginative designer. Like Freight (which Dyana Weissman reviewed for Typographica), Halyard communicates a clear vision of — and a strong opinion about — how to design for optical sizes in the twenty-first century. Appearing to balance effortlessly between utility and expressiveness, combining usefulness with quirkiness, is, I guess, every type designer’s ultimate goal (though exceptions exist).

Seeing Halyard put to good use in Antonio Cavedoni’s talk at Kerning Conference 2017 shortly after its release convinced me that it’s one of the most refreshing additions to type in 2017 — and beyond!

But for those who haven’t yet seen Halyard used to its full potential, here are some facts: the Halyard family consists of three subfamilies (Display, Text, and Micro), each consisting of eight weights with matching italics. The structure and interrelatedness of the styles crack open the concept of a typeface family and the overrated notion of consistency. Here, consistency is instead achieved through expression than through the mere repetition of formal features. It is a major achievement to pack so much individuality — on the level of glyph, style, and family — so tightly together and still have everything work well as a whole. This is the antidote to stupefied interpolation and marketing bullshit à la “works perfectly for both display and text.” Circumnavigating those shallow waters, Halyard makes no compromises on either end of the spectrum.

As Lucas Sharp states, there is a “strange perfection” to Darden’s work. But the strangeness remains extremely charming, and the perfection is anything but superficial — on the contrary, it’s a sublime force. Like Freight, Halyard is a brutal demonstration of the designer’s acute awareness of the mechanisms of typographic structure and hierarchy.

Transposing the wisdom of analogue production methods concerning optical sizes into the digital realm, Darden Studio’s self-description as being “rooted in the values and practices of five centuries of typefounding” is by no means an exaggeration.

Screen resolutions continues to improve, but the human eye retains its physical restrictions. The acknowledgment of the fundamental rules of perception combined with the understanding of document hierarchy and typographic requirements results in three subfamilies, each with its own distinct qualities, optimized for — but not limited to — a specific range of type sizes. Here, the laws of optics, convention, and spectacle are equally embraced.

This is a nonchalant mix of the American and European idioms — Gothic, Grotesque, and Neo-Grotesque influences alike. Especially from the Medium weights and up, it sets super tight and gives off an air of Helvetica’s best expressive qualities; there is a no-nonsense attitude to pretty much every word you type. Yet there is enough quirkiness here to make this style stand out. The uppercase R and Q will surely stop you in your tracks. And so will the weird combination of slant and rotation in the italics, which begs the question: What? Why? (More on that later.)

Where Halyard Display sports solid and symmetrical counters, the Text styles introduce a dynamism that results in a vivid texture, already pointing toward the Micro style. The modulation of the strokes and the often-not-so-subtle ink traps (see lowercase r and y) add even more to the sparkle.

As with Freight, the Micro styles are the most spectacular. The amount of variation at the detail level, the curve tension, the irreverence, and the will for innovation are absolutely stunning. Intended, as its name suggests, for sizes below 9pt, Halyard Micro’s shapes are almost too good to be spoiled on the low resolution of the human eye, or output devices. As with Freight Micro, this style will probably (one hopes) be used more often big, for its spectacular qualities, than small. It’s another trick that demonsrates the awareness with which Darden operates: exploiting necessary features imposed by the laws of optics for their spectacular function.

Every typeface comes with an ease of use, not only in technical but also in semiotic terms. Users want to have control over a typeface’s connotations and cultural implications.

The outer extremes of the spectrum seem to be the most successful at this: in expressive display types (see Future Fonts), the shapes themselves are responsible for adding flavor and meaning. At the other extreme, the generic voice of plain (often geometric) Grotesques can be loaded with pretty much any meaning the designer intends through their contextual use. More difficulties occur in the middle area, where subtleties dictate the meaning of typographic shapes. And it is there, with its mix of formal features and historical references, that Halyard is situated.

And, since we currently lack the vocabulary to talk about the semiosphere of typefaces, designs like Halyard do not make it any easier: floating in between connotations, such typefaces exist in a kind of genreless parallel universe, vast and with plenty of space for exploration —Alice Savoie’s recent Faune can be found here as well. Halyard is one of those faces that show that the Grotesque genre is no longer the realm of cooly distanced rationality. It is a most welcome countermovement to the pseudo-modernist logic and (disgusting) corporate friendliness in evidence elsewhere.

Of all of the oblique references to historical models that I can’t discern and that are hidden, deeply embedded, in Halyard’s shapes, I want to highlight one: the weird combination of slant and rotation in the Display italics seems, at first glance, like an accident — as if the apprentice changed the gearing of the digital pantograph midstream. I assume this is neither a gimmick nor a whim on the part of the designer(s), but rather a nod to Keystone’s Empire Gothic, showing some serious puzzling most prominently in the italic S. I think I can detect other references to Keystone faces, too — but this remains speculation on my part.

What this shows me is that the wider the referential framework, the more complex — and interesting — a design gets. With Halyard, none of the historical references are in-your-face obvious. The typeface is pure of any nostalgia or pastiche and incorporates the tradition of the sans-serif lettershapes in a smooth and natural way.

And: where have I seen that Q before?

If Typographica’s annual(ish) gala were about highlighting single glyphs of the previous typographic year, one would have a hard time choosing from Darden’s Halyard — it is crammed with innovatively funny characters.

As a sucker for both stencil shapes and the transformation from optical compensations into stylistic features, I would like to point out the detached elements of Halyard’s Micro styles. Combined with the deep ink traps (Micro Black’s G and 8, and Micro Light’s g), it feels as if every single letter has been thought of as an individual typographic sculpture. (Wait, I can’t hear you — a beautiful group of what?)

I have some marginal … issues — maybe ambivalence is a better word — with Halyard and its release promotion.

I’m not much of a fan of microsites for typefaces, and the one envisioned for Halyard’s release does not correspond to the greatness of the design. The fictional use cases here show the typeface in such a generic environment that they neither fuel the graphic designer’s imagination nor convey the cultural value Halyard imparts.

This is a critical moment in the promotion of typefaces in an overly saturated marked: the “product” (the typeface) is not only a set of more or less fit-for-purpose shapes (did I hear “tool”?), but a complex cultural object that embodies — in a highly abstracted form — values, kulturelles Selbstverständnis, an attitude. There is a missed opportunity here to emphasize, beyond the usefulness of its optical sizes, how fucking cool this typeface is.

Rumor has it that naming typefaces is difficult. In the case of Halyard, this difficulty, for me, extends beyond its release. In terms of acoustic, visual, and semiotic quality, the word chosen does not encapsulate the design and its visionary approach. It also feels like a missed opportunity to show off some of the awesomeness of the individual glyphs. Where to start? R, G, Q, S, g, s.

Another marginal Kritikpunkt — not everybody might agree here — is the supply of stylistic alternates for some glyphs like G, E, R, and S. Even if I am fully d’accord with Stephen Coles’ phrase “the new enough” and the fact that the supplied alternates do not minimize the strength of the design writ large, I think a reduction to one definite shape would have been more in sync with the determined attitude displayed on a global level. But on the other hand, all those Qs are lovely, indeed.

Halyard brims with confidence; the amalgamation of the opposing principles of functionality and expression makes this a bold, visionary statement. As with Freight, Darden Studio is setting the benchmark for the conception of designing for optical sizes at a time when other minds are mostly occupied with the implementation of the Optical Size axis in variable fonts. Beyond that, Halyard is — in my humble and very personal opinion — a major aesthetic achievement and the most original addition to the genre of sans-serif typefaces in recent years.

Ellmer Stefan runs an independent practice combining teaching, research, self-initiated projects and custom work in the fields of lettering, type and graphic design. In 2016 he established The Pyte Foundry, where a new display typeface was released every consecutive Monday of that year. Currently a resurrection of the Pytographic movement is … 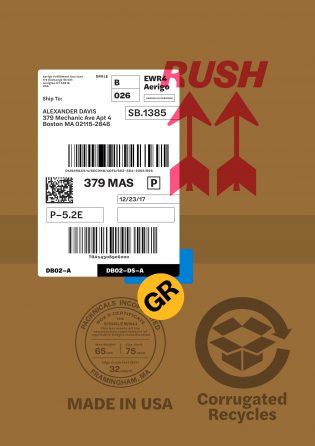 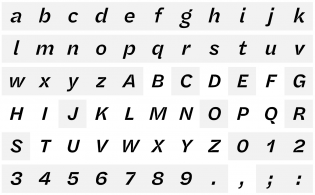 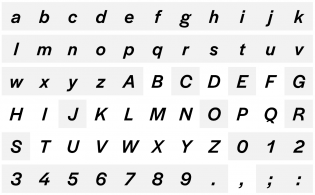