Reverse-stress typefaces have a tipping point. If the contrast is pushed too far — if the horizontals become a bit too heavy in relation to the verticals — suddenly the type can look like it belongs on a wanted poster or a saloon sign from the Wild West. That’s fine if the design is intended to be from that era, but what if you want a font with a inverse-contrast flavor that can be used in a much wider range of contemporary applications?

Hatch, by Mark Caneso of PSTL (ps type lab, formerly ps.type), avoids a clichéd association by keeping the contrast subtle. The difference in horizontal weight is just enough to make you take notice. It grabs your eye and leads it comfortably across a line. Its wide proportions and slab serifs also aid in this horizontal movement.

One thing I enjoy about this typeface is that it doesn’t take itself too seriously. It breaks out of the rigid modularity of many slab serifs by including some inventive letterforms. The descender of the roman y extends from the left stroke instead of the right. The k is a cursive form with a serpentine leg that starts inside the upper bowl. These touches give Hatch a distinct personality without being distracting. Taking cues from handwritten forms, the italics take the temperament of the roman and amplify it. Looping strokes, descenders that swoop into a closed bowl, and hooked entrance and exit strokes are just a few captivating details. An overall plumpness and rounded corners throughout give this typeface a fun, relaxed nature. The family contains eight styles: four weights in roman and italics.

Hatch may have its roots in the Wild West, but it has packed up and moved to the beach and it’s not looking back.

Josh Scruggs is a Type Designer for Hallmark Cards where he has worked since graduating from the University of Kansas in 2004. He is also a hand letterer and calligrapher. 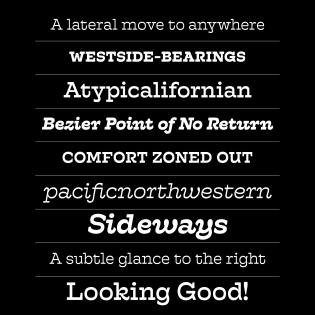