Inka is a perfect book and editorial typeface, crafted with attention to even the tiniest details. It will certainly work well in books, newspapers, or magazines; and thanks to the large repertoire of styles and huge glyph set, it can be of use in scientific publications or school books as well. Relatively narrow lowercase letters make Inka quite economical, too.

A very large family of sixty-four styles, Inka is divided into two subfamilies (A and B). Inka A has standard proportions, while Inka B has more compact ascenders and descenders. Each subfamily consists of four grades with descriptive names: Small, Text, Title, and Display; these are further subdivided into four weights. The difference between grades is not exaggerated, so the combinations look natural.

The diacritics harmonize perfectly with the letters. The accents of the text styles are heavy enough to be legible in small sizes, while the display ones are crispier and more delicate. Samuel was very serious about the details: The ascenders of Croatian ‘đ’ and Maltese ‘ħ’ miss the head serif (in Inka B only), certain ligatures have accented variants (fí, fľ, cť or sť), and on top of that, there is one cool contextual feature: letters with ascenders following ď, ľ and ť lose their head serifs to avoid collision with the vertical caron.

The fonts contain a very generous repertoire of 1113 glyphs, including small caps. Some letters have alternates, namely ‘a’, ‘f’, ‘g’, ‘Q’ and ‘&’. And not only are superior and inferior figures available; there is a complete set of lower- and uppercase letters available in their superior and inferior forms respectively (including alternate shapes of ‘a’, ‘f’, and ‘g’). Apart from the standard sets of figures, Inka offers small-cap numerals together with their tabular versions, and positive and negative indices. There are many other symbols and decorative elements available, too: arrows, basic geometric shapes, and manicules.

After spending some time with Inka, I can say it is an ideal multipurpose serif family, beautiful in large sizes and “invisible” in text sizes, with an unusually considerate treatment of Central and Eastern European characters.

Filip Blažek is a graphic designer, typographer and educator who teaches at the Academy of Arts, Architecture and Design in Prague, Czech Republic. Since 2002, he runs studio Designiq in Prague. He is an art director of the 365typo annual book. 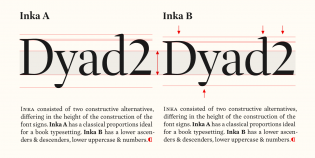 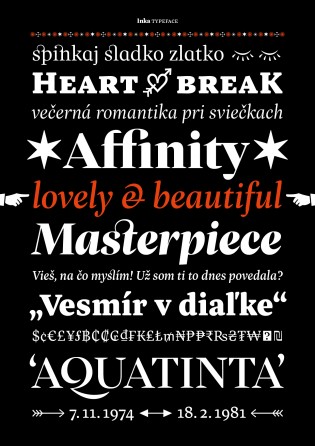