Sometimes, it’s the smallest details that have the biggest impact, and never has a truer word been spoken than when evaluating a typeface. In the case of Ivar, it was the petal-like terminal on the a that first caught my eye. Just that: one terminal, nothing more.

Göran Söderström openly acknowledges the influence of Times on the design of Ivar. By including three optical sizes, however, Ivar offers a far richer palette than we’ve come to expect from Times, which invariably looks awkward at anything other than 12–14pt. Indeed, as Jean François Porchez points out in his review of another Times reinterpretation, any self-respecting designer will generally avoid using Times altogether, lest they be seen as unprofessional.

Ivar began as an effort to create a serif companion for Söderström’s underrated Siri. Such a goal could have yielded quite predictable results, but a lengthy development process instead produced something quite original and utterly contemporary. Yes, the similarity to Times is obvious, but while Times has become more angular in recent incarnations, Ivar suggests what it might have grown into. The crisp forms and generous x-height, just the right width (thanks to the optical sizing), and a wonderfully smooth italic.

Even a cursory assessment makes clear that Ivar can provide a solid typographic foundation for all manner of projects. It has the same assured stance as Utopia, though is rather more transitional in form. Four weights per optical size provide sufficient coverage without becoming overwhelming.

Söderström has spoken about letting his designs’ personalities shape their ongoing development, avoiding the boring perfection that modern tools can so easily produce. Somehow he’s managed to let Ivar do just that, without any showy features, and despite it landing squarely in an already well-populated typeface category.

Designers cannot escape the baggage of the past if they continue to use old typefaces. Thankfully, Ivar is here to help move them along — without having to show off either. 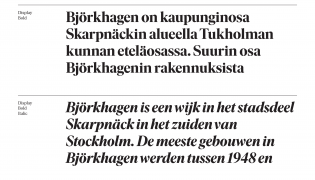